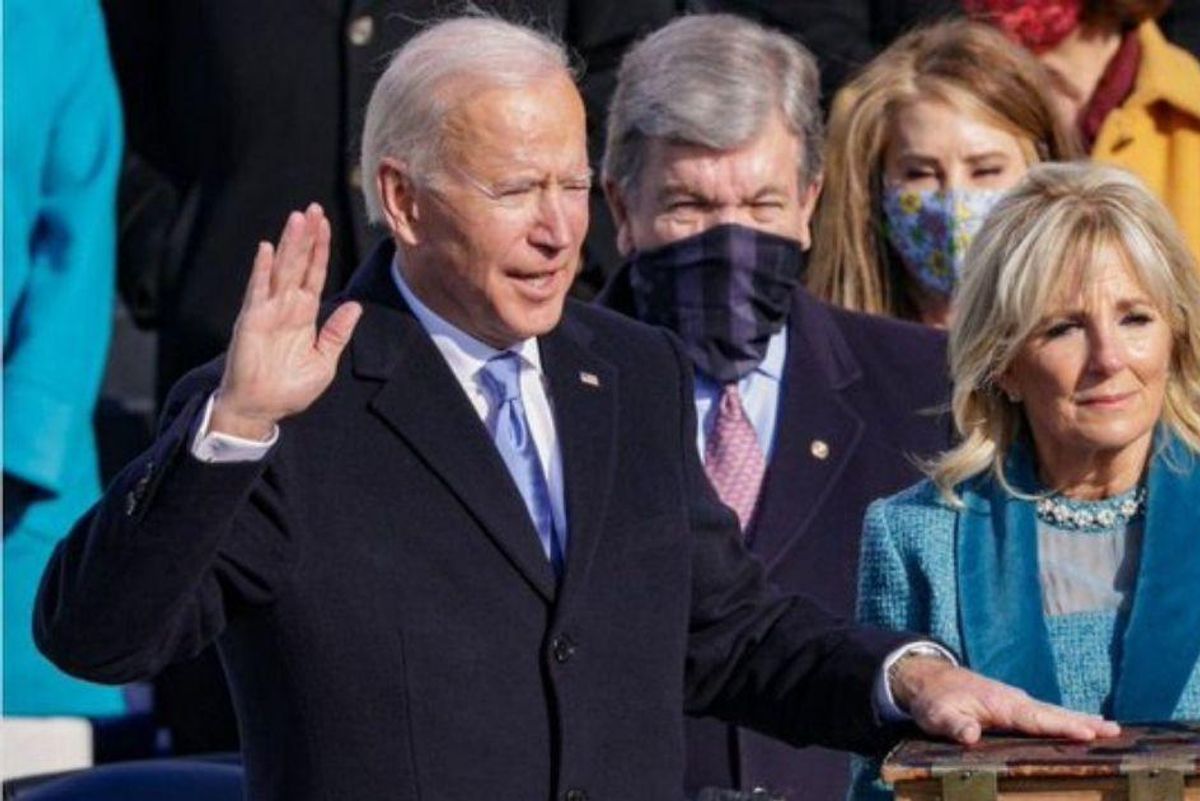 In the hours before he was sworn in as the 46th president of the United States, then-President-elect Biden was sent a letter signed by 17 freshmen GOP members of the House of Representatives.

In sharp contrast to the 121 Republican House members who voted against the certification of Biden’s electoral votes—a constitutional procedure merely check-marking the state certifications that had already taken place—this letter expresses a desire to “rise above the partisan fray” and work together with Biden as he takes over the presidency.

Congratulations on the beginning of your administration and presidency. As members of this freshman class, we trust that the next four years will present your administration and the 117thCongress with numerous challenges and successes, and we are hopeful that – despite our ideological differences – we may work together on behalf of the American people we are each so fortunate to serve.

After two impeachments, lengthy inter-branch investigations, and, most recently, the horrific attack on our nation’s capital, it is clear that the partisan divide between Democrats and Republicans does not serve a single American.

The constituencies we represent showcase the variety of thought across our great nation. From Texas to California and from Oklahoma to New York, Americans are tired of the partisan gridlock and simply want to see leaders from both sides of the aisle work on issues important to American families, workers, and businesses.

We hope to work with you to extend targeted, meaningful coronavirus relief for families and businesses, protect Americans with pre-existing conditions, strengthen and modernize our infrastructure, enforce our antitrust laws against emboldened technology monopolies, and restore our economy struggling in the aftermath of the coronavirus pandemic.

We firmly believe that what unites us as Americans is far greater than anything that may ever divide us. In that spirit, we hope that we can rise above the partisan fray to negotiate meaningful change for Americans across the nation and maintain the United States’ standing as the best country in the world.

It may be worth pointing out that 17 out of 211 is a pretty small number, and some of the names on this list overlap with those who voted to reject Biden’s certification. It’s also worth pointing out that referencing the two impeachments and inter-branch investigations in the same breath as the attack on the Capitol (which they mistyped as “capital”) feels a bit off, especially when pointing to them as seemingly equal examples of “the partisan divide.”

But hey, any formal acknowledgment that partisan gridlock sucks and serves no one is a step in the right direction. We have to start somewhere if there’s to be any hope of getting anywhere.

Amid a devastating global pandemic and the threat of domestic terrorism, @JoeBiden was sworn-in as the 46th preside… https://t.co/tS7fRtbagM

George Washington tried to warn us of “the baneful effects of the spirit of party generally” and explained what would happen if we didn’t heed that warning. (Spoiler: It’s exactly what is happening in our politics right now.) Imagine how much more we could get done in our government if it weren’t for lawmakers playing toxic partisanship like a team sport. Partisan politics itself is inherently divisive, and it would be fabulous if we could come up with a better system, but here we are. If we have to work within a two-party system, we need the people in it to approach bipartisanship in good faith.

Whether this letter was issued in good faith by all who signed it remains to be seen, but at least it’s a start. With some Americans being unwilling to accept the legitimacy of Biden’s presidency, we need leaders across government to step up and speak up, put an end to the lies and the partisan rhetoric that pushes people to extremes, and work across the aisle to solve the problems we all face.