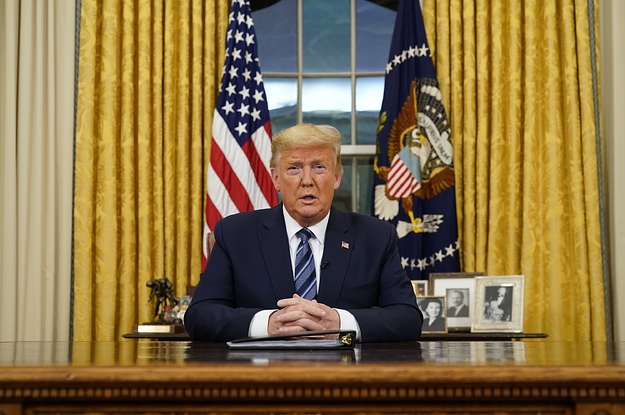 The US is suspending all travel from Europe to the United States for at least 30 days in an effort to stop new clusters of the novel coronavirus from sprouting across the country.

“To keep new cases from entering our shores, we will be suspending all travel from Europe to the United States for the next 30 days,” Trump said.

There will be exemptions for Americans “who have undergone appropriate screenings,” Trump said. The restrictions will also apply to trade and cargo. The UK is exempt from the new rules.

As of Wednesday, more than 1,200 people have tested positive for COVID-19, the disease caused by a novel coronavirus first identified late last year in Wuhan, China, and 36 have died.

Though the virus originated in China, it has become a global pandemic. The virus has been spreading within US communities for weeks, causing large conferences, concerts, and other events to be canceled, forcing schools to close, and leading to quarantines of communities.

“This is the most aggressive and comprehensive effort to confront a foreign virus in modern history,” Trump said.

During his remarks, Trump placed blame on the European Union for the increase in cases in the US.

A widespread outbreak in Italy has forced government officials there to lock down the entire country until at least April 3. On Wednesday, the government said it would temporarily close all nonessential commercial services and shops, including restaurants, bars, and hairdressers.

“The European Union failed to take the same precautions and restrict travel from China and other hot spots,” Trump said. “As a result, a large number of new clusters in the United States were seeded by travelers from Europe.”

Immigration experts quickly criticized the move, saying that the government’s focus should be at home.

“The virus is here in the US. The focus needs to be on taking action here — treating people and testing people — this seems to be pointless,” John Sandweg, a former senior Department of Homeland Security official in the Obama administration, told BuzzFeed News. “This is not going to be terribly effective and distracts from where the focus needs to be.”

Sandweg said the move may lead to some confusion, adding that enforcement would be “a challenge.”

“Sealing off one country from another is next to impossible,” said Sarah Pierce, an analyst at Migration Policy Institute. “If the Europe ban is similar to the bans on nationals from Iran and China, it will have large exceptions, because it is legally, morally, and logistically impossible to close off our borders in this globalized world.”

Pierce described the restrictions as “the biggest and most comprehensive” travel ban in response to a public health threat in US history.

Acting DHS secretary Chad Wolf applauded the president’s actions in a statement, saying that it would protect the American people.

“The actions President Trump is taking to deny entry to foreign nationals who have been in affected areas will keep Americans safe and save American lives,” Wolf said.

He said the ban, which was instituted through a presidential proclamation, would suspend entry to “most foreign nationals” who have been in certain European countries — Austra, France, Germany, Greece, Italy and many others — in the last 14 days prior to their arrival to the US. The ban does not apply to green card holders or those who have immediate US citizen family members.