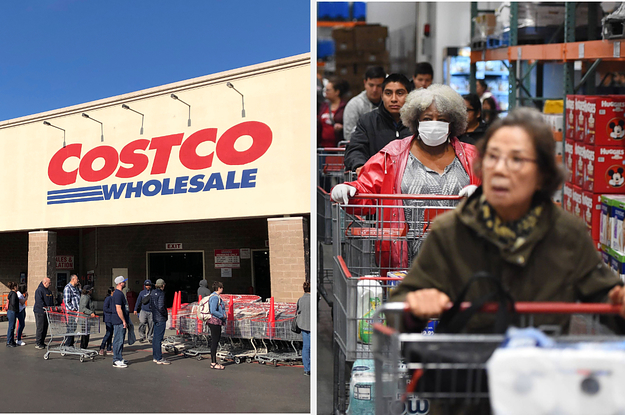 Employees at a Costco in Los Angeles are sharing gloves, when they can find them. A supervisor at a warehouse in Austin has been calculating which bills she’ll skip this month if she has to keep missing work because she can’t stop coughing. A worker in the South is waiting for her COVID-19 test results, wondering how many of her colleagues she might have infected.

Across the US, thousands of Costco workers at hundreds of warehouses have been on the frontlines of the coronavirus pandemic, interacting with hoards of panicked shoppers every day, hustling to unload trucks, restock toilet paper, water, diapers, and fill prescriptions. The stores have stayed open to long lines of mask-wearing members, extending hours, with some never closing, while surrounding small businesses and stores shutter as counties and states enact stricter quarantine measures to try and slow the virus’s spread.

It’s grueling work, but employees say they know it’s important and their global retailer has raked in record profits because of it. But they are terrified it will cost them their own health because, they say, they’re on the frontlines without any protection.

“My biggest concern is people are saying, ‘Where do I get a mask? Where do I get a mask?’ On a daily basis you have people cough in your face or talk when they spit,” a member of the sales team at a Costco in Culver City, California, told BuzzFeed News. “Never did I think that working at Costco would be the same thing as a first responder. We’re fucking ground zero.”

BuzzFeed News spoke to more than a dozen employees from Costco locations across the country. They are supervisors, truck drivers, door greeters, cashiers, pharmacists, stockers, and TV sellers and requested anonymity out of fear of losing their jobs. They are some of the nearly 30 workers who have contacted BuzzFeed News over the past few days, expressing their fear, exhaustion, and frustration at the lack of gloves, masks, sanitization equipment, and protocol. Their predominant concern was that if they needed to take time off, for reasons pertaining to the coronavirus, they would have to use Paid Time Off or sick days, and many don’t have those hours to spare.

In private Facebook groups and chats, workers across the country are also sharing stories of unprecedented door counts and questioning why their stores have not limited how many people enter at a time.

“Yeah we’ve done very little at our store. “Limiting” 1000 people in the building at one time…have to say as a 13yr employee I’m extremely disappointed with the way our company is handling the situation” an employee from Billings, Montana, commented in a group.

“Our door counts have been in the 900s,” another in San Jose, California, posted Friday. “My location has not started limiting on how many people come in at a time.”

“We were having 3,500 people allowed to come in at a time and no masks have been required,” a supervisor at that location told BuzzFeed News. “Everyone is sharing gloves. We’re bringing our own and if we have enough, we give them to each other.”

In addition to not having the proper gear to protect themselves, it’s been nearly impossible to buy goods for their own families, since they can really only shop after their shifts, the veteran employee said. About an hour after opening, the shelves are wiped of baby formula, toilet paper, and other necessities.

“My staff hasn’t been able to buy anything. We’re turning our own employees away from milk and diapers,” she said. “We stand on the foundation of taking care of our employees. We are a wholesome company. An American company. But our employees can’t buy food for their families. It breaks my heart to see employees not be able to buy water. We’re hurting here.”

Got a tip? Email the reporter of this story at brianna.sacks@buzzfeed.com or contact us here.

In a memo sent to staff in Culver City, California, on March 16, management acknowledged that due to the “long hours and extra days to keep up with the demand of business,” they would offer two employee-only shopping days: this past Thursday, from 11 p.m. to 1 a.m. and this upcoming Sunday, from 6 a.m. to 8 a.m.

“It’s ridiculous,” the supervisor, who has worked at the company for more than 20 years, said. “I am disgusted as an employee. We have dropped the ball as a company. You have employees working endlessly and they are scared.”

At the same time, she said her warehouse had made $1.4 million one day last week. Managers at other warehouses across the country shared similar profits, balking at how they’ve far surpassed their Christmas and Black Friday numbers, yet their employees say they aren’t seeing any extra compensation.

“It feels like you’re expendable,” a manager at a store in Hayward, California, told BuzzFeed News. “The government deemed us essential yet what are we getting? Our exposure level is massive. This isn’t like fires or earthquakes, it’s different now that it’s a global pandemic and normal, ordinary people are now ‘essential’ and we have no extra pay or benefits. If we bring it home to our parents, our children, and they get it, what is the benefit for being at work?”

This manager, along with several others, said he has started telling his employees to stay home, concerned by how leadership has been downplaying the severity of the virus and the “laissez-faire” attitude toward sanitization.

“We have truck drivers coming in and they don’t have any protective gear. We unwrap the goods and put it straight on the floor because the demand is so high,” he said. “I wouldn’t feel comfortable bringing items home to my family knowing what I know. So many hands on things goes through so many depots. There’s no screening, no nothing.”

What’s been the most agonizing, he said, and keeping him up at night, is when his staff do stay home for their own safety— “They are getting docked their own sick time and vacation.”

If Costco employees want to stay home because they develop a cough, are pregnant, have an auto-immune disease, or are concerned because they’re taking care of their elderly parents, they said they have to use their own paid time off or sick leave, which takes a long time to accrue. Many employees say they’re running low or have used all those hours and, as a result, they’re taking those absences and forgoing a paycheck.

Because of the unprecedented nature of the coronavirus pandemic, several supervisors told BuzzFeed News that Costco changed its policy and is no longer penalizing employees for taking extra absences. However, many workers cannot afford to miss work for two, three, or seven days in a row, especially now.

“I don’t have any more sick time,” Amari, a manager at a Costco in the southeast, told BuzzFeed News. “I literally cannot afford to miss work.”

But she has been. Toward the end of one of her shift’s this week, Amari started to feel warm and strange. She’d been feeling “off” this whole week, coughing and congested, and said that when she told her supervisor, “they told me it sounded like I had allergies.” She decided to take her temperature using some of the new thermometers in the break room.

“I said, “This can’t be right. I had a fever of 101,’” she said. “I had to finish my shift, and after, I expressed I had a fever and there was no sense of like, Let’s check protocol. You read everything that the CDC says and none of it is being followed.”

On the phone she couldn’t help worrying out loud: What if she had the virus, should she wait four days until her test results came in and not go to work? Could she afford to live for two weeks “without any money?”

“I have been shopping for older people in my church and I am afraid for them,” she said.

Before this, she said she had always been proud to work for Costco. She’s been at the same warehouse for nearly 10 years and often referenced the company’s “core ethics.”

“This is the first time in my life I have felt shame to work there,” she said. “At what point did making money become more important than caring about people?”

When asked if she had a mask to wear, she said she’d found a “cleaning mask” she bought awhile ago when she first moved into her house.

What’s the point though, she asked, frustrated.

28 Products To Help You Have Better Hair This Year