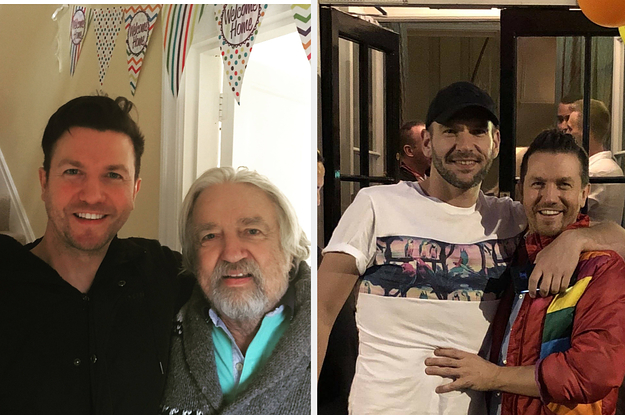 “It was when the health secretary said on TV about people with myeloma being at high risk that we just went, ‘Oh shit,’” says Sam Dowler, 42. He lives with his father, Graham, 74, in Hertfordshire, caring for him with his mother as they manage the treatment for Graham’s incurable cancer. “He went white in the face.”

Multiple myeloma is a rare cancer of plasma cells that can lead to bone fractures and life-threatening infections. The last year has been particularly tough, says Dowler, following bouts in hospital and a worsening of his father’s overall condition — and that was even before the coronavirus pandemic struck. “He coughs so much he faints and falls on the floor.”

The Prime Minister then announced on Sunday that 1.5 million people, including people with this cancer, would be “shielded” because their medical vulnerabilities were so great that they should not risk leaving their house at all for the next 12 weeks. “This shielding will do more than any other single measure that we are setting out to save life,” said Boris Johnson at the press conference.

But there was something left unsaid: What does that mean for their carers? Today, Dowler reveals what such life-saving measures will really take: the sacrifices and unforeseen consequences that face him, his family, and the millions who shield the shielded.

“I haven’t seen my boyfriend in two weeks,” he says – and he has no idea when it will be safe to see him again.

The official advice is that those living with the vulnerable do not have to follow the same strict regime of total isolation (without once venturing into the outside world) as long as they follow the guidance on social distancing. But this would require loved ones to keep two metres away and to sleep separately. Couples married for 50 years would be prised apart within their own home. Children who might normally lift their parent, help them up the stairs, or lower them into the bath, would have to stop, with no one to replace them – and then what?

For some, the only logical interpretation of the government’s advice is that whatever the shielded person does, so too must anyone who lives with them. Otherwise, whatever increased risk their contact with the outside world poses to them, necessarily then puts their shielded loved-one at risk too, as soon as they return home. And for Dowler, the complexities of their situation meant that over the course of the last few days, the realisation sunk in: he would either have to leave or shut himself away with his parents for however long it takes.

“We started off thinking, ‘of course; social distancing,’” says Dowler. His father stopped going out to restaurants, but Dowler carried on seeing people, going to the gym, and popping down on the train to London, where he used to live before Graham was diagnosed five years ago.

“Then I started to think, ‘Why am I [still going out] if he isn’t, when we’re living in the same house? Surely everything I’m doing now is effectively what he’s doing.” Confusion now besets many in this situation, he says. Initially, he emailed BuzzFeed News with the questions he was asking himself: “Can I go out? Do I need to isolate myself for 3 months too? Should I move out for the risk of killing him?”

But on the phone, the answers had already come. “A few times I thought, ‘Am I getting a sore throat? Is this a cough? Have I got it [the virus]?’ The other night I started to panic because I thought I would have to live somewhere else just to save him and thought, ‘would it be too late? Has he already got it?’” The stress of worrying, and the fear of being infected without knowing it helped cement his conclusion.

“Once you make the decision that you can’t see anybody, you wonder why you hadn’t made that before,” he says. “If you’re going to do it, you have to do it completely. You can’t just pick and choose which bits of social isolation you want to do.”

Dowler has been with his boyfriend, David, for over a year. David works in a residential facility for people with mental health problems, some of whom, says Dowler, are not adapting well to the advice about social distancing,. David’s father, with whom he lives, has had a quadruple heart bypass. Any risk David has of contracting the coronavirus from his patients, therefore, could then be passed onto his at-risk father. David will be sleeping at work from now on.

At the weekend, Dowler and David discussed what they were going to do. “He said, ‘It’s going to be a couple of months,’ and then he was like, ‘it might be a year.’ It’s huge.’”

Dowler’s mother, Jackie, tried to help, suggesting he could still see David as long as they kept two metres apart. “But if that’s your partner all you want to do is hug them and I can’t do that.” Along with everyone now, Dowler can’t see members of his family who live elsewhere; his sister and nieces nearby, with whom he had planned to spend time, giving them art classes as they sat out the school closure.

But it is his relationship that seems to sting the most. As he talks in the most practical way about getting on with it, doing what has to be done, and protecting the most elderly and vulnerable, Dowler relays how his mother, sensing how upset he was, tried to help further by giving him a get-out clause.

“She said, ‘I want you to have some semblance of a life during this,” says Dowler. She suggested he could move out in order to see David and not be forced into absolute isolation with his parents. “But the moment I leave this house I won’t be able to come back, so what do I do? Do I say I want to see my sister and her kids but I don’t see you for the next three months? My parents are the ones that need the help.” His mother tried to reassure him. “She said, ‘I could look after your dad standing on my head,’ but I do the cooking, mainly. I just know that it’s a lot for her.” It would be, he thinks, deserting her.

Dowler begins to describe how he is envisioning it all. “You have to think of it as a war,” he says. “You’ve gone to war.” But then he starts to talk through his plans for enduring it. “He’s [David] only round the corner, not far. I’m going to start baking and going to his work and leaving him some baked goods and….” Dowler breaks down. He stops and breathes. “And [I could] sort of wave. Just leave it on the ground.” He swears – “for fuck’s sake” – angry at himself for letting the pain surface, before stealing himself. “That’s fine though.”

Graham was only diagnosed because of chance – because of his son. Dowler had badgered him to join a gym and see a personal trainer. The trainer pushed him so hard that he “hurt himself and ended up going to hospital where they X-rayed him,” says Dowler. The scans revealed holes in Graham’s spine and ribs. Further tests revealed that this was multiple myeloma. There is no cure but instead treatments that enable patients to live for several years, but which require monitoring and persistence, often with daily medication, including steroids, and monthly visits to the hospital to have an intravenous infusion of chemotherapy.

Graham was comparatively lucky: he was diagnosed just shy of his 70th birthday – the cut-off point for bone marrow transplants, which he had shortly after diagnosis. He was given a chance.

But the reality was not easy. “He had to wear a back brace for six months because his spine was crumbling away,” says Dowler. “They filled out his back with Polyfilla, or that’s what he calls it, anyway.” Dowler left his London flat to move back and help look after him. As well as cooking, he drives Graham to hospital for chemo and helps around the house, supporting his mother.

The Christmas before last, Graham had kidney failure and sepsis, leading to a month-long stint in hospital. “We thought that that was that,” says Dowler. “We had the ‘I’m going to die, this is what I want you to do’ conversation.” But Graham pulled through, to the surprise of the doctors.

Since then, he’s been weaker, prone to a terrible, uncontrollable cough, and then, last month, pneumonia and hospitalisation again. He returned home three weeks ago, just as the coronavirus pandemic escalated.

Shielding, meanwhile, might seem the safest solution for the most vulnerable. But for many with myeloma, including Graham, they still have to visit hospital once a month for their injection. There are alternatives – pills, such as Farydak and Thalidomide – that doctors could in theory give to their patients to take at home, enabling them to keep to the shielding guidelines. But they are normally reserved for third-line treatments, when intravenous therapies have failed, and hospitals would need reassurance that the cost of the alternative drugs would be reimbursed. When approached about this by BuzzFeed News, neither the Department of Health nor NHS England responded. Dowler did not know about these treatments, and nor, he says, does his father.

Beyond his own life, Dowler is worried for his parents. Total isolation “stretches out now like a sentence,” he says. “They’re watching the news on the hour, every hour. The next few weeks is the most crucial. I can’t think past that.”

He tries to grapple with the new reality landed upon them. “A month ago you would never have even thought…it’s like a nuclear bomb. It’s horrible and shitty and you have to do it.” Again, Dowler quickly wrenches himself back, refusing to crumble. “You can video call people,” he says. “It’s not the same, you can’t touch them or smell them. But I can sit in the garden.”

He fears more for those in the shielded group who don’t have partners or children, anyone to look after them. The government said they would all receive a letter detailing how the next 12 weeks would work; that care packages of food, essentials, and medical supplies would be delivered the houses of everyone on the list. “But will they get a phone call?” asks Dowler. “It’s the people on their own we have to worry about most. A lot of old people don’t want to be a nuisance.”

He worries about the processes involved working properly, that people will slip through the net, and is particularly concerned about the communication surrounding the need to shield. It has been, he says, “100% confusing.” Not just for those on the most vulnerable list, but those looking after them. “So many people are saying how confused they are.” The letters were due to go out on Monday, but the Dowlers have not received theirs yet.

Hubs will be set up locally to manage the packages and care being delivered. Whatever systems come from this crisis need to stay, says Dowler. “There’s no reason to stop it. It will benefit society as a whole.”