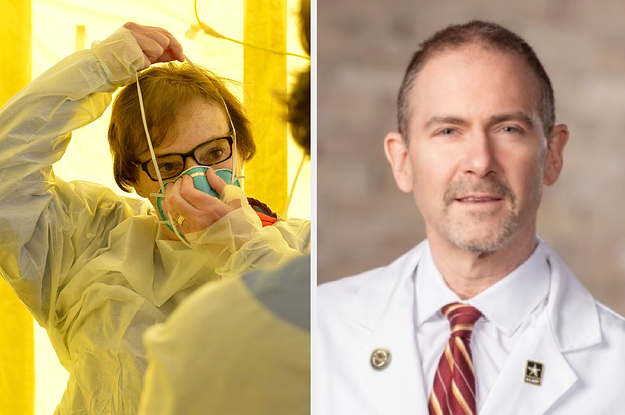 The details were straight out of a Mission Impossible movie: a secret meeting at a warehouse interrupted by the FBI, disguised trucks with separate travel routes to avoid interception, a wire transfer, and a last-minute political plea to prevent the confiscation of valuable goods.

But according to one doctor, this is the reality his hospitals faced to get protective gear for health care workers on the frontlines of the coronavirus pandemic.

“It felt a little bit like something out of a movie, but it is our reality and it would be funny if it weren’t so serious,” Dr. Andrew Artenstein, chief physician executive at Baystate Health in Massachusetts, told BuzzFeed News.

As hospitals across the country continue to deal with shortages of personal protective equipment (PPE) and states compete for supplies, Artenstein described his team’s particularly desperate quest a couple weeks ago to obtain face masks and N95 respirators in an article published Friday in the New England Journal of Medicine.

After exploring countless leads for supplies, “some bizarre and convoluted, and many involving large sums of money” that fell through after they were “outbid or outmuscled,” in some cases, by the federal government, Artenstein said his team locked down a deal for a large shipment of three-ply face masks and KN95 respirators, a Chinese equivalent to the N95 masks that are recommended as the best protection for hospital workers in the US.

“Having acquired the requisite funds — more than five times the amount we would normally pay for a similar shipment, but still less than what was being requested by other brokers — we set the plan in motion,” he wrote.

Three members of Baystate’s supply-chain team, a fit tester, and Artenstein then traveled from Springfield across state lines to meet the supplier at an industrial warehouse. There, two semi trucks marked as food-service vehicles waited to be loaded before heading back north on two different routes “to minimize the chances that their contents would be detained or redirected.”

“The concern was that at some point somewhere some authority — whether it be the federal government, the state government or some other authority — might take a closer look if there was clearly medical equipment going somewhere, event though it wasn’t contraband,” Artenstein said in a phone interview. “Everyone needs it so badly, and, to be honest with you, we were desperate to make sure our people were protected. We needed to get that stuff back to Baystate Health System.”

When they arrived, they opened several boxes to examine the masks, fit-testing a few of them to ensure their quality. But before they could send the payment for the supplies by wire transfer, two FBI agents showed up and started questioning Artenstein.

After showing the agents his credentials and reassuring them that the masks were going to hospitals and weren’t meant for black market, Artenstein said the officials allowed them to proceed and load the PPE into the trucks.

But then Artenstein said he learned that the Department of Homeland Security was considering seizing the shipment and directing the PPE elsewhere. So his team called their representative in Congress, Rep. Richard Neal, who he said intervened to prevent the federal government from derailing in the deal.

Representatives for Neal and DHS did not immediately respond to BuzzFeed News’ requests for comment.

In a statement provided to BuzzFeed News, the FBI said that as a result of an executive order signed by President Trump prohibiting the hoarding of medical supplies, the agency has been investigating the distribution of PPE to ensure it is not being illegally sold or hoarded.

“While the FBI does not confirm or deny the existence of investigations, we want to assure the public the FBI remains committed to ensuring national security and pursuing violations of federal law, and vigilant in deterring, detecting, and investigating wrongdoing related to the COVID-19 pandemic,” the statement said.

Artenstein said that while the number of COVID-19 cases in Baystate’s hospitals appears to have plateaued and as government officials talk about plans to begin reopening parts of the economy, obtaining adequate PPE is an ongoing problem.

“It would be improper to think that we have completely resolved these challenges because I can tell you on a daily basis they still continue, and I don’t think we’re alone in that,” he said. “If we were alone, we would be able to get these things … [and] go through our usual channels.”

Here How Different 47 Celebrities Looked When They Were Exactly 20-Years-Old Compared To Now
If You Were A Disney Princess, What Color Woul Your Dress Be?

What Each Zodiac Wants During Sex