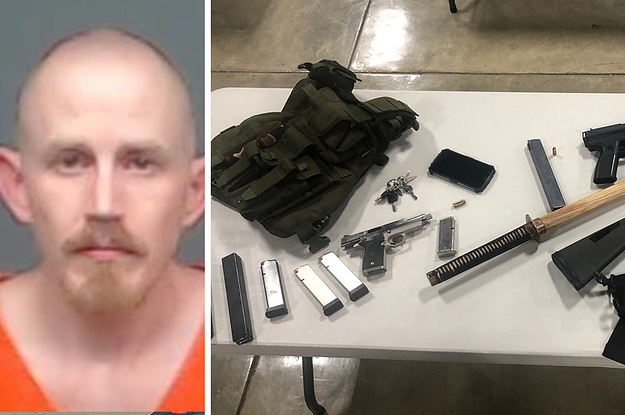 Police in Texas arrested a man earlier this month after they said he took to Facebook Live to stream his search for a lone police officer to “ambush and execute.”

According to the Texarkana, Texas police department, authorities received several 911 calls reporting that 36-year-old Aaron Swenson went live on Facebook on the night of April 11, broadcasting his intentions to kill a police officer.

After joining the live feed, police were able to identify Swenson’s whereabouts and sent several officers to the area. Once confronted, Swenson led police on a high-speed chase before eventually surrendering. According to police, Swenson was wearing an armored vest and had several loaded weapons in his truck.

Swenson has been charged with making terroristic threats against a police officer, evading arrest, and unlawfully carrying a weapon.

For months leading up to the incident, Swenson had been sharing memes from boogaloo pages on Facebook. In this internet subculture, boogaloo is slang for an upcoming second civil war, and members share anti-government, anti-law enforcement, and pro-gun messages.

According to the Network Contagion Research Institute, which tracks how hate moves from social media to the real world, the roots of the boogaloo movement can be traced back to the 1984 breakdancing film Breakin’ 2: Electric Boogaloo. Soon jokesters starting playing around with that format and eventually, a meme around Civil War 2: Electric Boogaloo was born. Usage picked up rapidly toward the end of 2019 as pro-gun activists pushed back against new gun control laws and legislation that were being introduced as a response to recent mass shootings.

Facebook and Instagram are home to a number of large boogaloo groups that boost tens of thousands of followers.

“While many still use the boogaloo meme jokingly, an increasing number of people employ the phrase to incite an apocalyptic confrontation with law enforcement and government officials or to provoke ethnic warfare,” wrote the authors of a February report published by the Network Contagion Research Institute.

Swenson seemed particularly affected by boogaloo posts about the death of Duncan Socrates Lemp, a 21-year-old who was killed by police in Maryland as they served a warrant for alleged gun offenses earlier this year. On March 13, the day after Lemp’s death, Swenson changed his profile picture to a photo of his torso where he is wearing a Hawaiian shirt with an armored vest over it, a sort of uniform for boogaloo boys. The photo included the hashtag #HisNameWasDuncan.

“Well, as I have no real important reason to live a long peaceful(bleh) life,” Swenson wrote on Facebook, “How ever this [Maryland] incident goes, I am eager to be a part of a response. If it should go that direction, anyone in [Northeast Texas] that wants to form up, hit me up!”

Just 33 Random Products We Really Love
17 Famous Actors Who Lied Right To Your Face, And You Believed Them

42 Gadgets That Are Actually Reliable