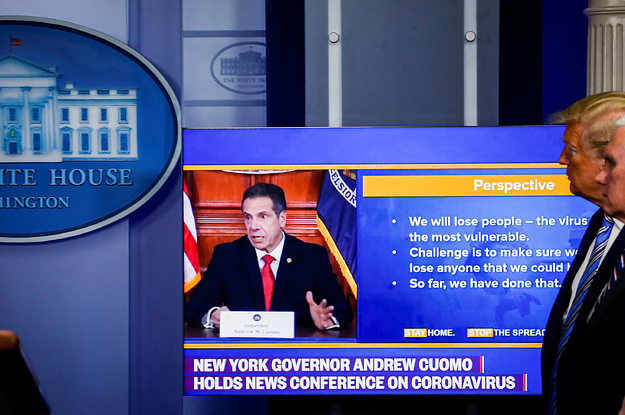 We may all be at home, but that hasn’t stopped our reporters from breaking exclusive stories like this one. To help keep this news free, become a member and sign up for our newsletter, Outbreak Today.

On March 27, as emergency rooms in New York and across the country began filling with coronavirus patients struggling to breathe, President Donald Trump posted on Twitter to urge Ford and General Motors to “START MAKING VENTILATORS, NOW!”

One of the thousands of replies that the tweet attracted struck an equally urgent tone: “We can supply ICU Ventilators, invasive and noninvasive. Have someone call me URGENT.”

Its author was Yaron Oren-Pines, an electrical engineer in Silicon Valley. A specialist in mobile phone technology, he currently has just 75 followers on Twitter and no apparent experience in government contracting or medical devices.

But three days later, New York state paid Oren-Pines $69.1 million. The payment was for 1,450 ventilators — at an astonishing $47,656 per ventilator, at least triple the standard retail price of high-end models.

Not a single ventilator ever arrived.

A state official, speaking on background because he was not authorized to publicly discuss the terms of the deal, said New York entered into the contract with Oren-Pines at the direct recommendation of the White House coronavirus task force.

Nearly a month later, New York has terminated the contract, and the state is now trying to recover all of the money it paid the Silicon Valley electrical engineer. Officials refused to say how much the state had been able to claw back. “We are in discussions on a few remaining issues,” said Heather Groll, a spokesperson for the New York Office of General Services, part of the interagency effort to help New York get supplies.

Reached by telephone, Oren-Pines said “neither me nor my company is providing any comment on this,” and then hung up. He did not respond to subsequent text messages.

The money he received on March 30 was the largest single payment made by the New York Department of Health under an executive order issued by Gov. Andrew Cuomo last month that aimed to streamline the procurement process so that critical medical equipment could reach hospitals as quickly as possible.

The episode underscores the extent to which the fear of overrun hospitals prompted politicians around the country — and particularly in New York — to turn to untested and at times unqualified vendors.

“We had no choice but to overturn every rock to find ventilators and other needed equipment,” said Rich Azzopardi, a senior adviser to Cuomo, referring to the state’s scramble to find critical medical equipment as the pandemic overtook New York.

“States were forced to fend for themselves to purchase lifesaving supplies to combat a global pandemic and with all modeling showing a more severe spread of this virus with more hospitalizations and more fatalities,” Azzopardi said. He added that the state has since been able to meet most of its needs and is now reevaluating some contracts and canceling others, while going through with other contracts as it tries to build up stockpiles to help prepare New York for any future emergencies.

Like most states, New York’s procurement rules typically prohibit payments for goods or services until after an order has been fulfilled. But Cuomo suspended those rules last month to meet the urgent need for ventilators, N95 masks, gowns, and other personal protective equipment. A 25-member team now works overtime to vet potential vendors. In some cases it has begun paying for orders before they are fulfilled.

Between March 19 and April 27, the Health Department cut 77 checks for $1 million or more for medical supplies, for a total of nearly $735 million, state records show. Some of the recipients are established health care suppliers, such as Henry Schein, a huge, publicly traded distributor with $10 billion in annual revenue and a long history of contracting for New York state.

But the overwhelming majority of the payments were made to an eclectic mix of firms, many with little or no apparent experience in medicine: upscale fashion and other apparel brands; Chinese iron ore and tool importers; a company that sells hair and wrinkle removal products; a number of private equity and investment firms; and even the Qatar Fund for Development, the state-run foreign aid arm of the petroleum-rich Persian Gulf nation.

If you’re someone who is seeing the impact of the coronavirus firsthand, we’d like to hear from you. Reach out to us via one of our tip line channels.

The New York Department of Health was hardly the only government agency to enter into contracts amid the pandemic that, in retrospect, might appear to have been hastily negotiated. The California Department of Transportation, for example, agreed to pay $12.74 apiece for N95 masks that typically retail for as little as $1.25, while the Federal Emergency Management Agency signed a purchase order for 2 million respirator masks at $7.25 apiece — more than 10 times the price it’s paying to buy them directly from 3M — only to cancel after the vendor said it couldn’t deliver.

New York City, meanwhile, rushed over the past month to order 214.7 million pieces of personal protective equipment, including N95 masks, gloves, and face shields, yet so far only 8% — or just 17 million — of those items have arrived as vendors struggle to fulfill orders, according to a spokesman for the New York Department of Citywide Administrative Services.

But it was the state government in Albany that proved most aggressive in its acquisitions as it struggled to deal with COVID-19.

“I need 30,000 ventilators,” Cuomo said in a press briefing on March 24. “How can you have New Yorkers possibly dying because they can’t get a ventilator?”

Three days later, the state issued the second of two payments totaling almost $116 million to a small Brooklyn company called Dome International that rents ventilators and other respiratory devices to hospitals and nursing homes. The company, which has no website, has no record of prior contracting with New York or with the federal government.

The deal was for 5,700 ventilators, according to a report by the Albany Times-Union, but it never gelled and the lifesaving devices were not delivered. A call to Dome International’s co-owner, David Chait, was not returned.

Two payments totaling $32.3 million, meanwhile, went to a Tampa company, Premier Orthopedic Solutions, which specializes in selling devices used for rehabilitation from joint surgery. The owner, Carl Bax, played offensive line for the Tampa Bay Buccaneers of the NFL, but in 1990 was arrested before his second season after receiving a shipment of steroids. He pleaded guilty and his football career ended after nine more games.

Bax did not respond to a request for comment.

But the contract with Oren-Pines stands out even among the motley array of vendors that struck deals with New York state over the past month.

It’s unclear how he came to the attention of the White House coronavirus task force, which was established in late January and is chaired by Vice President Mike Pence and has featured daily press briefings led by President Trump. The task force also confers regularly on the state of the pandemic, including the availability of ventilators, N95 masks, gowns, and other much-needed medical supplies around the country.

“The guy was recommended to us by the White House coronavirus task force because they were doing business with him as well,” said the New York state official. “I think everyone was genuinely trying to help each other out and get supplies.” The New York official added that he was unaware of whether Oren-Pines got a federal contract; federal databases show no record of any contracts struck with Oren-Pines.

An Israeli immigrant who graduated from the University of Maryland, Oren-Pines has lived in Silicon Valley since the mid-1990s, public records show, and is named on at least 18 different patents. He has held a variety of jobs in the tech sector, including a recent stint with Google and several years at Crocus Technology, a venture-backed firm that specializes in magnetic computer memory, according to his LinkedIn profile and interviews with former colleagues.

Mike Ritter, who supervised Oren-Pines at Google, said that before the pandemic, they had made plans to meet up in Napa this week, but those plans were canceled and the two haven’t spoken in weeks. Ritter said he wasn’t aware of the contract for ventilators but said he knew that Oren-Pines had supplier contacts in Asia.

“He’s always a go-getter. Anytime there’s opportunity, he’s always been out there trying to help and make a buck,” said Ritter.

In 2013, Oren-Pines cofounded Legasus Networks, a networking solutions company, in the Bay Area. Doug Lee, who’s listed on registration documents as the company’s chief executive officer, said he had no knowledge of any transactions involving ventilators. According to Thao Tran, one of its other founders, Legasus “has nothing to do with medical or ventilators” and has not been active. “We don’t have any products right now.”

Oren-Pines’ LinkedIn profile indicates he is the founder and owner of a company called InCommon, described as a consulting and contracting firm for the mobile phone industry. No listing for InCommon could be found in state registries.

A review of Oren-Pines’ social media shows he has been tweeting at Trump since 2011 and been a vocal supporter since at least December 2015 when he offered, on the website, to put up a “Trump for President” lawn sign in front of his house.

Since late January, Oren-Pines has posted a handful of tweets related to the coronavirus, including one on March 20 listing stock index performance in different countries, showing that only China had made a small gain, and describing the idea that China might benefit from the pandemic as an “interesting conspiracy theory.”

A week later, he tweeted in response to the president’s call for ventilators.

A tweet posted less than an hour after Oren-Pines’ call-out about the ventilators provides one possible clue to his plans. The tweet was from an account belonging to Israeli entrepreneur Segev Binyamin, whose three Twitter followers include Oren-Pines. Offering to supply ventilators to Israel’s defense minister, Binyamin wrote, “I own a Chinese company and have the ability to ship 1,400 machines.” That happens to be almost the exact number of ventilators Oren-Pines contracted with New York state to sell.

Reached by BuzzFeed News, Binyamin, whose account also follows Oren-Pines, repeatedly said “I’m not going to comment” before hanging up.

Oren-Pines, with his bid of $47,600 per ventilator, was one of them. By comparison, the Department of Health and Human Services paid $15,000 apiece for top-of-the-line ventilators made by Philips —and Congress is currently investigating whether that price was too high.

“We selected our contracts based on the best value under market conditions that were literally changing every day,” said Azzopardi.

A separate deal for 750 ventilators in New York, since canceled, valued each at an even more remarkable $74,666. The state was eventually able to recover the $56 million it had paid Trinity Partners, a health consulting firm.

Groll, the spokesperson for the New York Office of General Services, did not answer a series of detailed questions about the transaction with Oren-Pines other than to say it had been “terminated” and that “a bulk of the money was returned to the state.”

32 Products Reviewers Said Were Totally Worth The Money