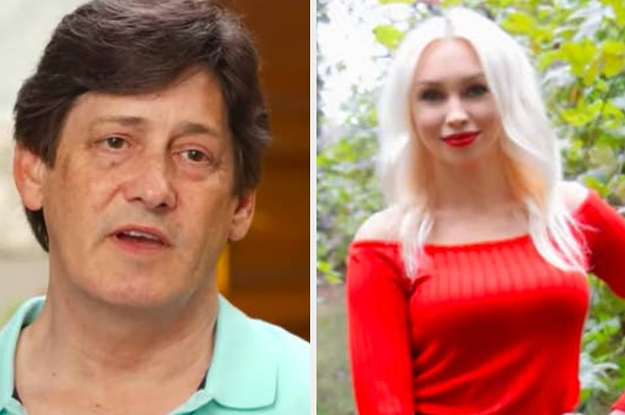 This is Lana. She’s 27 and lives in Ukraine.

David talks to Lana for four hours a day. They’ve been “dating” for seven years.

David pays to chat with Lana by the minute. He has spent over $100,000 over the course of those seven years.

“I have video chatted with Lana on the site, but there is no audio. It’s visual only. You can see them smiling. You can see them react to what you’re saying. But it’s also way more expensive to use their video services.”

David can only talk to Lana when they are both on the website. He also doesn’t have her phone number. She doesn’t speak english.

David is traveling to Ukraine to meet Lana for the 4th time.

The other three times David went to Ukraine Lana hasn’t showed up.

He thinks the 4th time will be the charm.

David packs. “Massage oil, of course. I’m an expert. Hopefully I’ll be able to use it.”

David gets to Ukraine. He is supposed to meet Lana at the train station in a blue dress.

For the 97th time we see David on his Macbook because remember, it’s literally the only way they can “speak” to each other.

“Lana I am devastating. I want you so much. Do you want to be married to me because we have talked about it.” No response.

David says he’s going to go to her hometown.

A friend warns him that Lana’s hometown is lowkey in a war zone and that he probably shouldn’t go there. David doesn’t care.

He travels 400 miles to meet her even though she has no idea he’s on his way.

David gets to Lana’s hometown. He finally gets in touch with her and she agrees to meet. “Okay dear,” Lana says, completely ignoring the fact that she just ditched him in Odessa. David smiles.

David gets to the restaurant. He take a bird bath in the bathroom sink.

The woman running the café is not surprised.

David decides he’s just going to show up at her apartment. He has her address from the time she gave it to him for a cruise they were supposed to go on years ago.

He gets to her building. He goes up to the door.

David meets with a private investigator who tells him he’s being scammed. “Lana” has many different profiles with the same picture and different names.

David doesn’t believe the private investigator. Eventually he fires him.

David goes back to the U.S..

“What signs were I ignoring? Because I think I was ignoring some,” he says. “I could never, ever, imagine that this trip would end the way it has.”

He doesn’t talk to Lana for 2-3 weeks. She reaches out and says she was too overwhelmed to meet last trip.

David decides to go back to Ukraine for the fifth time.

“I’m trying to meet my girlfriend for the fifth time. We’ve been communicating for seven years and never met,” he tells the concierge.

They set a time and place: Independence Square, 11 AM.

He sprays himself with cologne. “That’s what she’ll smell when we hug for the first time.”

“I have no proof that she actually lives here, but I really don’t care.”

David strolls around anxiously in his oversized leather trenchcoat.

It’s all about that large leather trench.

Lana talks about David’s pictures from his dating profile. This is one of them:

For reference, this is David’s garage:

He rides a unicycles.

Lana says she feels like she has met her soulmate.

They awkwardly stand together but don’t speak to each other because they literally can’t communicate.

He kind of sniffs her.

The happy couple walks off with each other.

If None Of These Hilariously Drunk People Make You Laugh, Absolutely Nothing Will
Only People Obsessed With Rom-Coms In The Early ’00s Will Pass This Quiz