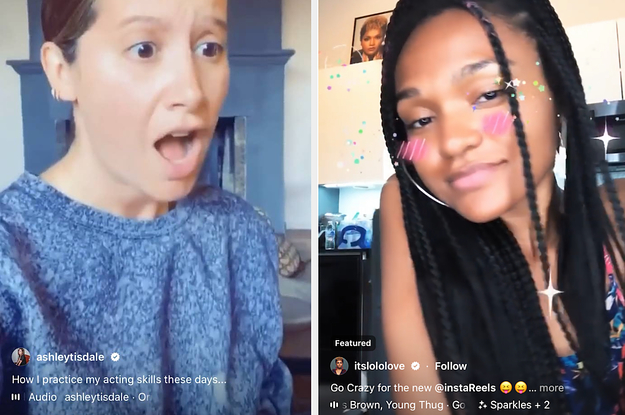 On Wednesday, Instagram launched possibly its most anticipated US update since Stories or the dog filter: its TikTok competitor, Reels.

And, I gotta say, Reels sure looks a lot like TikTok.

Of course, this all couldn’t come at a better time for Instagram or its parent company, Facebook. President Donald Trump has begun waging an all-out war against TikTok, which is owned by a Chinese company called ByteDance. Last weekend, Trump threatened to ban the app from the US over what he called concerns with what the company is doing with American data

In the middle of the drama, Instagram had the serendipitous luck (although, I put nothing past Mark Zuckerberg) of dropping what is essentially a TikTok clone. (Apropos of nothing, emails released cited in a Congressional hearing last week revealed that Facebook bought Instagram in the first place in order to “neutralize” a competitor.”)

It really is an uncannily similar product. I got access to Reels on Monday ahead of the US public launch, and immediately was kind of amazed at how TikTok-y Reels felt.

With the tap of a button, you can scroll through Reels almost exactly like you scroll through your For You page, falling into the same kind of mindless, addictive scroll-hole that has made TikTok a favorite pandemic time-waster of millions.

The early access was only open to select publishers, influencers, and journalists so there weren’t as many of the random teens, hilarious videos, and funny animals that you would see on TikTok, and the pool of videos was much smaller. However, a lot of the culture seems to have made the jump, with a lot of the same memes, songs, and sounds I normally see on my ForYou page popping up on Reels.

In fact, as I scrolled through Reels on Tuesday, I saw an Ashley Tisdale video that I had literally just seen on my ForYou page on TikTok. A lot of people just seem to be uploading old TikToks onto Reels, which makes a lot of sense, tbh.

Eva Chen, Instagram’s fashion director, recreated a huge TikTok trend with her daughter as her first foray into Reels. And when I wanted to show it to my followers, all I had to do was hit share, and I could upload it to my Instagram story.

Publishers like Bravo have also readied for the upcoming launch by helpfully uploading viral moments for people to act out, which is a super popular trend on TikTok.

Of course, TikTok has plenty to offer that Reels does not. I am admittedly horrible at creating content (that’s why I report on it instead), and can’t speak in depth to how the TikTok video-creating experience stacks up to Reels. (I have attempted making videos on both platforms, and they feel about the same to me in terms of how user-friendly they are).

Popular TikTok features, like the ability to “Duet” with other videos, aren’t available on Reels, and TikTok has, of course, built up its own culture of memes, sounds, and creators that will be hard to completely imitate. TikTok also has its famed algorithm for discovering videos, which will be difficult to match.

However, my main takeaway from Reels is the same one that, ultimately, led to me eventually stop using Snapchat once Instagram launched Stories. It’s just so easy to have everything in one place.

With Reels, I can easily toggle from my Stories, to my Explore page, and then to TikTok-style videos all in one app. I don’t have to build up a whole new following on TikTok, and I can see what people I am already following on Instagram are posting. If I see a funny video I want to share with my followers, I can upload it easily to my stories without having to switch apps. I could see influencers, many of whom have launched TikToks in recent months to keep up with the trends, just posting to Reels instead and no longer worry about building a new fanbase on a new platform.

Of course, there are plenty of people, especially teenagers and young adults, who use TikTok as their main social media app, who won’t be tempted to switch over. But for those who primarily use Instagram and/or Facebook, the ease of Reels will make it an extremely tempting alternative.

It’s just convenient to have all your followers, and all your content, in one place. And Instagram as always, has just made it easier to spend even more time on it.

“Schitt’s Creek” Just Made History At The Emmy Awards, And Everyone Is So Excited About It

‘The Monopoly of Violence’ looks at the debate over police brutality

‘Uber Karen’ gets her trip canceled because of her bad attitude

Which Halloween Candy Are You Based On The Spooky Movies You Choose?