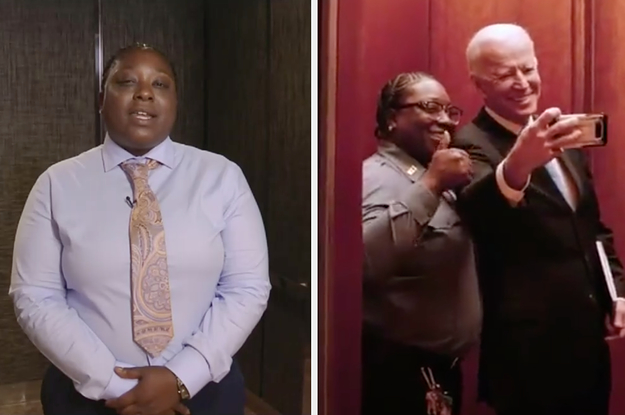 Jacquelyn Brittany, a New York Times security guard whose encounter with former Vice President Joe Biden was captured in a viral video, was the first to officially nominate him for president at the Democratic National Convention Tuesday.

Jacquelyn, who has declined to share her last name with the media — Brittany is her middle name — met Biden while escorting him to a New York Times editorial board meeting in December.

Her remarks on Tuesday emphasized Biden’s empathy and decency, a characterization his campaign has pushed to highlight the contrast between him and President Trump.

“In the short time I spent with Joe Biden, I could tell he really saw me. That he actually cared, that my life meant something to him,” Jacquelyn said. “And I knew even when he went to his important meeting, he would take my story in there with him. That is because Joe Biden has room in his heart for more than just himself.”

Tough days are ahead, she added, “but nominating someone like that to be in the White House is a good place to start. That is why I nominate my friend, Joe Biden, as the next president of the United States.”

Her first encounter with Biden was when she accompanied him and his campaign staffers up the elevator for his interview with the Times editorial board for its endorsement for the 2020 presidential election (the board later jointly — and controversially — endorsed Sen. Elizabeth Warren and Amy Klobuchar).

“I love you, I do. You’re like my favorite,” Jacquelyn told Biden in the elevator after he struck up a conversation. “You are awesome, oh my God.”

Video of their exchange later went viral, and the Washington Post reported hours before Tuesday’s convention that she would be playing a prominent role in his nomination, one that typically only elected officials are asked to do.

Jacquelyn told the Post that she was overwhelmed by the idea of being the one to nominate Biden.

32 “New Girl” Jokes That, Unequivocally, Are Some Of The Funniest Lines Of All Time