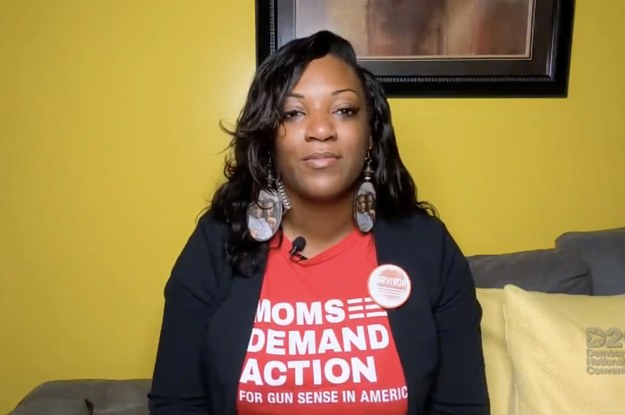 DeAndra Dycus, a mom who turned her life toward activism after her son was shot in the back of the head during a party, shared her emotional story while calling for gun control at the Democratic National Convention on Wednesday.

Her son, DeAndre Knox, was 13 when he was shot in Indianapolis, leaving him quadriplegic and unable to talk. Since then, Dycus said she’s worked to be a voice for him.

“In every town across America, there are families who know what a bullet can do,” she said. “That’s why I’m a mom who volunteers to stop this.”

On the third night of the DNC, speakers in the beginning of the convention spoke out against gun violence, including former Rep. Gabby Giffords and Marjory Stoneman Douglas High School shooting survivor Emma González.

Dycus spoke about caring for her son, and the everyday difficulties she battles.

“Today, DeAndre does not talk, he does not walk,” she said. “I know he knows me by the smile he shows me when I walk in his room, but I’m unsure if he knows a gunshot has changed his life.”

The pandemic has made things even more difficult, she said, and since March, she’s been able to see him only three times, though she’s not allowed to touch or hug him because of COVID-19.

“The child I birthed is not able to live his dreams and that hurts,” she said. “Everyday we’re reminded that he may never be the same.”

Dycus criticized President Trump’s response to gun violence, but instead of blasting the president’s opposition to gun control in the face of a number of mass shootings during his first term in office, Dycus called out his response during the tragic shootings.

“President Trump, he doesn’t care,” she said. “He didn’t care about the victims after Parkland, Las Vegas, or El Paso. I want a president who cares about our pain and grief, a president who will take on the gun lobby to ban assault weapons and close the loopholes to guns out of the hands of criminals.”

In Her Convention Speech, Hillary Clinton Asked Voters Not To “Give Up On America”
An 11-Year-Old Girl Whose Mom Was Deported In 2018 Delivered A Striking Message To Trump