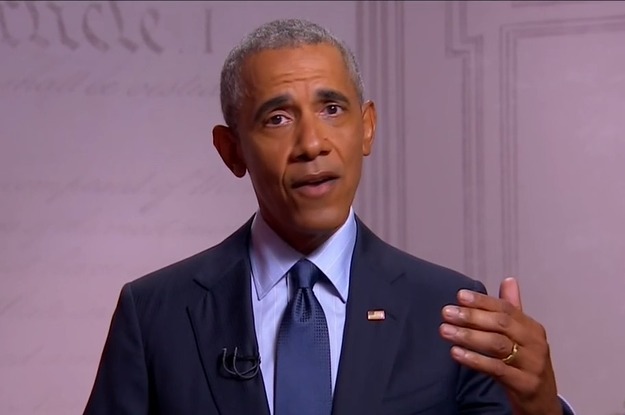 Former president Barack Obama continued an argument advanced by his wife at this week’s Democratic National Convention: that Donald Trump lacks the empathy, morality, and competency to lead during a pandemic and a reckoning over systemic racism.

Speaking Wednesday night from the Museum of the American Revolution in Philadelphia, Obama talked of the country’s past struggles with a “democracy that did not work.” He sought to reassure voters that this does not have to be an irrevocable moment in time but also warn that “what we do echoes for generations.” And, like the speech former first lady Michelle Obama delivered Monday, his remarks held contempt for the man he transferred power to in 2017.

“I did hope,” said Obama, who built his political brand around hope, “for the sake of our country, that Donald Trump might show some interest in taking the job seriously; that he might come to feel the weight of the office and discover some reverence for the democracy that had been placed in his care. But he never did.”

“Donald Trump hasn’t grown into the job because he can’t,” Obama added. “And the consequences of that failure are severe: 170,000 Americans dead, millions of jobs gone while those at the top take in more than ever, our worst impulses unleashed, our proud reputation around the world badly diminished, and our democratic institutions threatened like never before.”

Those two mentions of Trump by name came before Obama’s first mention of Joe Biden, the presumptive Democratic presidential nominee who served two terms as his vice president. Like his wife did Monday, Obama gradually worked his way to a case for Biden, which amounted to an obvious contrast — that Joe Biden is not Donald Trump. Obama relied on an introductory video, from the 2017 White House ceremony where he surprised Biden by awarding him the Presidential Medal of Freedom, to deliver his most moving praise.

“Joe is a man who learned — early on — to treat every person he meets with respect and dignity, living by the words his parents taught him: ‘No one’s better than you, Joe, but you’re better than nobody,’” Obama said in his Wednesday night remarks. “That empathy, that decency, the belief that everybody counts — that’s who Joe is.”

But after a few minutes on Biden and his running mate, Sen. Kamala Harris of California, Obama returned to his case against Trump, broadening it out in spots to cover the Republican Party at large.

“None of this should be controversial,” he said after criticizing Trump for, among other things, blessing the use of force to remove peaceful anti-racism protesters so he could stage a photo op at a church near the White House. “These shouldn’t be Republican principles or Democratic principles. They are American principles. But at this moment, this president and those who enable him, have shown they don’t believe in these things.”

Like many of the principal speakers at the convention — including Bernie Sanders and Hillary Clinton — Obama also framed this year’s election in existential terms. He emphasized voting, and making a specific plan to vote, in the midst of a coronavirus pandemic when vote-by-mail options might be safest and when Trump is attempting to undermine the United States Postal Service.

“This president and those in power — those who benefit from keeping things the way they are — they are counting on your cynicism,” Obama said. “They know they can’t win you over with their policies. So they’re hoping to make it as hard as possible for you to vote, and to convince you that your vote doesn’t matter. That’s how they win. That’s how they get to keep making decisions that affect your life, and the lives of the people you love. That’s how the economy will keep getting skewed to the wealthy and well-connected, how our health systems will let more people fall through the cracks. That’s how a democracy withers, until it’s no democracy at all.”

An 11-Year-Old Girl Whose Mom Was Deported In 2018 Delivered A Striking Message To Trump
19 Movie Scenes That Were So Smart, I Can’t Believe Someone Thought Of Them