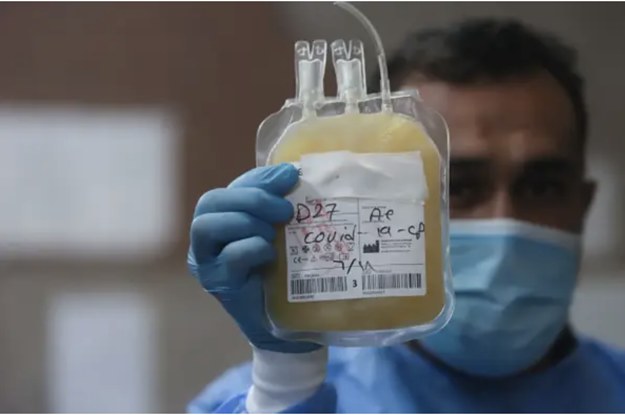 President Donald Trump announced on Sunday evening that convalescent plasma, the antibody-rich portion of blood collected from patients who have recovered from COVID-19, has received an emergency use authorization from the FDA.

“To deliver treatments and vaccines, we’re removing unnecessary barriers and delays, not by cutting corners, but by marshaling the full power of the federal government,” Trump said at a press conference. “Based on the science and the data the FDA has made the independent determination that the treatment is safe and very effective.”

But scientists caution that plasma has not yet been proven to be effective through the gold standard of evidence-based medicine, randomized controlled trials, which look at the outcomes of patients who are randomly assigned to receive a drug versus those who get a placebo. And an emergency authorization could further hamper efforts to complete those trials in the future.

“We don’t know if it’s safe and effective if it’s not a decision based on randomized controlled data. Period. End of story,” said Steven Nissen, Chief Academic Officer of the Heart and Vascular Institute at the Cleveland Clinic.

When asked by a reporter if he considered plasma treatment “safe and effective” or if it showed “promising efficacy, FDA Commissioner, Stephen Hahn, did not directly answer, but said, “Under our legal authority — for emergency use authorization — this is not the same as an approval, but it’s an authorization.”

Hahn said the authorization “allows us to expand access to this.”

“We’re going to continue to collect data,” Hahn said. “It’s the nuances of the language around the authorization that we use in the legal aspect.”

Plasma is widely regarded to be safe. “There are really large troves of reassuring data suggesting that plasma isn’t going to hurt people,” said Katharine Bar, assistant professor of medicine at the University of Pennsylvania.

And early data on its use as a treatment has been promising. A large, non-peer reviewed study of more than 35,000 patients led by the Mayo Clinic found that providing COVID-19 patients with infusions of plasma early on in their illness showed a small benefit in reducing the number of deaths in patients with severe illnesses. While 8.7% of patients who received plasma within three days of getting sick, those who got plasma infusions afterwards died at a rate of 11.9%.

Hospitals across the country are already using plasma on desperate patients as well, under compassionate use guidelines. US hospitals are currently treating around 1,500 COVID-19 patients a day with blood infusions of plasma.

But experts caution that the availability of plasma in hospitals has also made it very difficult to recruit patients to participate in randomized controlled trials, since they could end up getting a placebo, and that the EUA will likely make that even harder.

“I just think logistically it’s going to be very challenging,” Bar said. “If a patient or a patient’s family is considering using plasma and they hear that the government just said it’s effective, but you want to enroll me into a study where there’s a chance I’ll get a placebo? That makes it really difficult. We don’t do RCTs for things that are shown to be effective.”

Emergency use authorizations do not require the same amount of evidence as a full drug approval, but will make it easier for hospitals to move ahead with doing the infusions.

Scientists have raised questions about the White House’s role in pressuring the FDA to issue such authorizations, particularly after the agency revoked its authorization for hydroxychloroquine, following studies showing that it was not effective as a treatment and could cause heart problems in some patients.

On Saturday, Trump put pressure on the FDA in a tweet and implied that politics was at play.

“I think there might have been a holdup, but we broke the logjam in the last week,” Trump said during Sunday’s press conference. He once again suggested, without evidence, that there were people in the FDA and the Department of Health who “can see things be held up and wouldn’t mind so much… and that’s for political reasons.”

Asked by a reporter after the press conference whether Trump had pressured the FDA to make the emergency authorization for plasma, the FDA commissioner, Stephen Hahn, did not respond.

“I don’t think we have a better example where we had the opportunity to do basic randomized studies and just have not,” said Peter Bach, a physician at Memorial Sloan Kettering Hospital in New York. “It’s a very unfortunate example of where we just didn’t handle doing the science of this pandemic well at all. It should be a source of shame.”

13 Times People Experienced Unexplainable, Creepy Glitches In The Matrix
27 Hilarious Tweets About Robert Pattinson In That “The Batman” Trailer