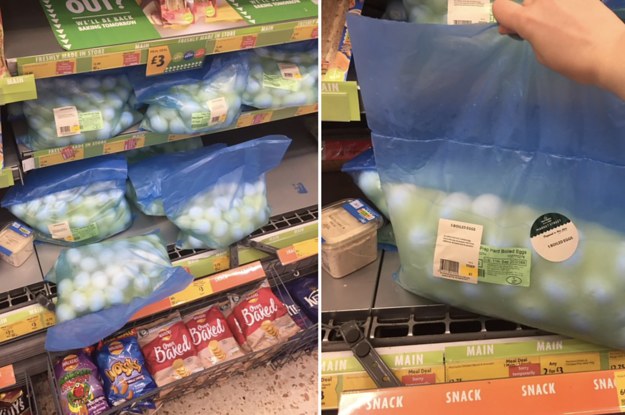 If you’ve ever desired a comically large plastic bag full of wet, boiled eggs, then it’s truly your lucky day.

Twitter user @TrumpetSexy revealed in two genuinely cursed photos that Morrisons, a UK grocer, is selling what appears to be dozens of eggs sitting in an unknown liquid and available at room temperature. Delicious!

The photos were an immediate viral hit and the tweet now has nearly 120,000 likes and has prompted many, many questions.

Like, why does the bag say there are five eggs when there are clearly many more? Is the whole thing really just £1? And also, why?

Someone named Rochelle on the Morrisons social media team has gotten in on the action and has been replying to some of the tweets about the egg sack.

When reached by BuzzFeed News, a Morrisons spokesperson said the eggs are just leftovers bundled together.

“‘These boiled eggs are prepared for our salad bar. Sometimes, rather than wasting them, we offer them to customers directly,” the spokesperson said.

Mystery solved? Honestly, no, but if you need a lot of wet eggs you know where to go.

29 Products With Before-And-After Photos So Amazing, Their Under $25 Price Is Just A Perk
How Well Do You Know Cardi B’s Music Videos?

“Legally Blonde 3” Now Has A Release Date, Giving Us All Something To Look Forward To

14 Hilarious Tweets In Response To RDJ, Mark Ruffalo, And Zoe Saldana Standing Up For Chris Pratt After He Was Called “The Worst Chris”