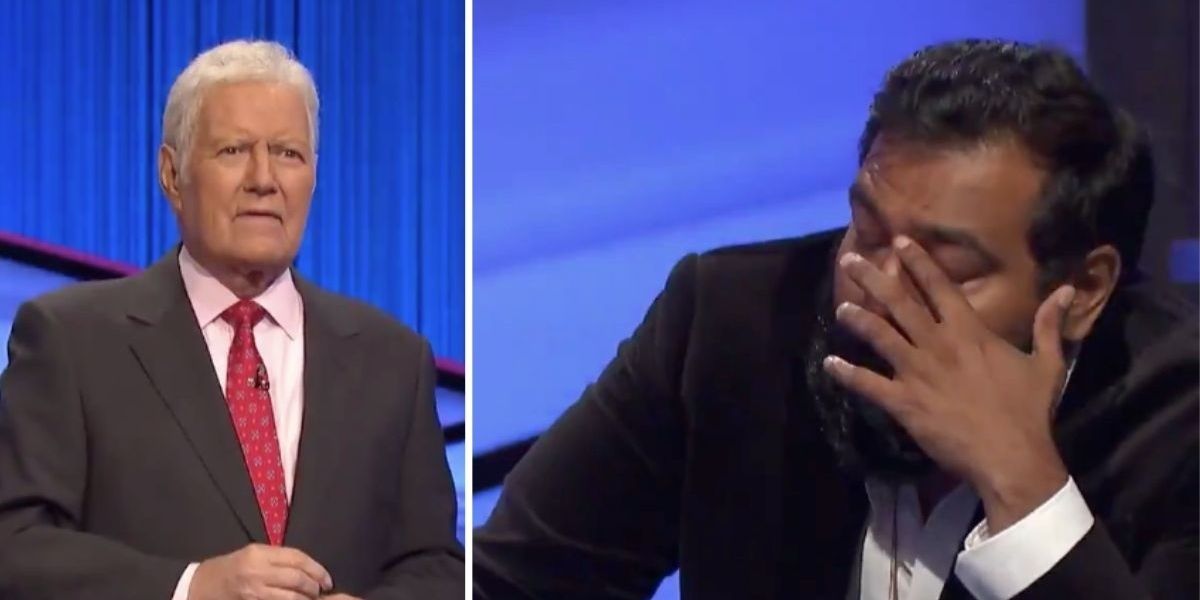 The world lost one of its best beloved television icons over the weekend. Alex Trebek, the host of Jeopardy! passed away at age 80 of pancreatic cancer. His cancer journey, which began in March 2019, served as an inspiration for millions, with Trebek sharing messages of hope and resilience throughout his treatments and continuing to host the show for as long as he could.

Many people have posted tributes to the famously upbeat host, including an in-person thanks from a Jeopardy! episode that aired just three days before Trebek passed.

After being named champion of the show, which was taped in August, 37-year-old Burt Thakur explained what being on Jeopardy! meant to him. Trebek asked if there was anyone special cheering him on at home, and Thakur, fighting back tears, replied:

“You know, here’s a true story, man. I grew up, I learned English because of you. And so, my grandfather, who raised me—I’m gonna get tears right now—I used to sit on his lap and watch you every day so it’s a pretty special moment for me, man. So thank you very much.”

Alex’s impact is immeasurable. Thank you for sharing, Burt! https://t.co/XgGGwJ8GlH

According to TODAY, Trebek had a humorous response to Thakur’s touching story. “Without skipping a beat he said, ‘I too sat on my grandfather’s leg, but he taught me swear words!'” Thakur told the outlet, laughing.

“My grandfather would always look at Alex and say, ‘That’s a good man and one day you’re going to meet him and shake his hand,'” Thakur told TODAY.

Thakur said Trebek was “an absolute gentleman and professional” when he met him. “He was so witty and funny,” Thakur told TODAY. “Alex Trebek is a significant reason why I am the way I am.”

Judging by his social media posts, Thakur is a kind and humble gentleman, so that makes perfect sense.

To win something money can’t buy was an indescribable experience. To be in such a diverse contest makes me proud to… https://t.co/596gHcIh3j

Even fans who never got to meet Trebek in person shared their gratitude to the man who they had watched for years.

Kazeem Famuyide wrote, “Alex Trebek did nothing but make you feel cool for being smart for 30 minutes every day for 36 years. Not many better ways to live a life.”

Alex Trebek did nothing but make you feel cool for being smart for 30 minutes every day for 36 years. Not many better ways to live a life

Alex Trebek made you feel smart and proud, smarter than your dad or your sister or whoever in the never ending fami… https://t.co/ns3QqTJGt3

Two-time Battle Rap World Champion Adam Ferrone wrote, “Alex Trebek’s death hit me more devastatingly than any celebrity death this year, maybe because I spent so much time consuming his content or maybe because he just seemed like a really decent, smart, curious man. RIP.”

Alex Trebek’s death hit me more devastatingly than any celebrity death this year, maybe because I spent so much tim… https://t.co/Ju9eQOOjhv

“Alex Trebek made us all feel smart and eager to learn without being condescending,” wrote Fawn Moscato. “He was upbeat and enthusiastic and always treated his guests with respect. Truly no one else like him on tv!”

Indeed, those of us who grew up watching Jeopardy! with our families could always rely on that half an hour to be soothing yet exciting, curiosity-inducing, and educational. When you guessed correctly, you felt like a brainiac. When you had no idea, you felt better when the smart people on the show missed some, too. I always wondered how much Trebek himself learned while making that show. He had to be a walking encyclopedia by the end.

But Trebek’s legacy will be in who he was, not what he knew. The Canadian who became an American citizen in 1998 was a philanthropist and activist who helped with many different charitable efforts from the USO to education to improving the lives of children in developing countries. He was a father of two and a breeder of racehorses. He was a kind and inclusive man who made everyone who came on his show feel welcome and everyone watching at home feel a part of it. And in his final months, he was an inspiration to us all.

What a beautiful example. The world will miss you, Alex.

30 Pieces Of Furniture And Decor To Organize Your Entryway