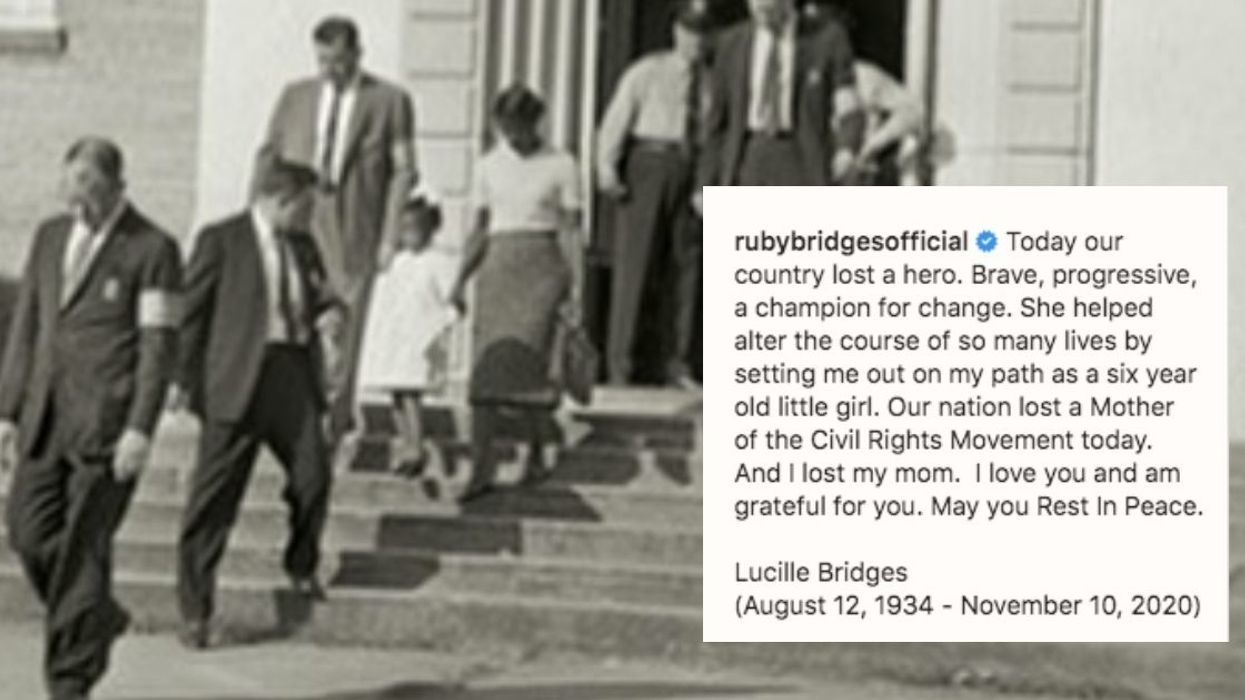 Lucille Bridges has passed away at the age of 86.

Lucille Bridges was the mother of Ruby Bridges, the first Black child to go to school in the newly integrated school system in Louisiana in 1960. At six years old, little Ruby Bridges had to be accompanied by a team of U.S. marshals and walk through crowds of angry white adults screaming racist hate at her just to go to school. She learned in a classroom with a kind teacher who was kind, but with zero other students because none of the white parents of the white kids would allow them to go to class with her.

The more you read of Ruby Bridges’ story, the more mind-blowingly awful it becomes. The viciousness of people’s hatred was palpable. The videos of the rabid mobs of outright racists yelling at a first grader are heartbreaking. The fact Ruby Bridges says the only time she felt scared was when a woman showed her a black baby doll in a coffin is both disturbing and at testament to Ruby’s innate courage.

I grew up hearing Ruby Bridges’ story and looking at the experience through her eyes. It’s hard to imagine how resilient she had to be. Seeing racist hatred through the eyes of a first grader is awful enough.

But seeing Ruby Bridges’ experience through Lucille Bridges’ eyes makes it so much worse.

Until you’re a parent, you don’t truly understand how much pain you experience on your children’s behalf. As a parent, you feel what your children feel. Their joy is your joy. Their pain is your pain. When my own kids are suffering, I suffer right along with them. It just comes with the territory.

But you also have an instinct to protect your children from harm. You know they have to go through difficulties to grow, but you still try to protect the from genuine danger.

So to imagine what it must have been like for Lucille Bridges to walk her little girl through the screaming racists hoards is unfathomable. The fear and frustration she must have felt for her child, as well as for herself. The anger she must have swallowed. The pride and dignity she had to pull forth and put on display. The sheer, unrelenting exhaustion of it all.

Then add to that wondering if she and her husband were doing right by Ruby. We all worry about the decisions we make for our children. In hindsight it’s easy to see the Bridges’ courage and conviction as vital threads in the now iconic civil rights movement, but in the moment it had to have been a grueling decision. Ruby’s father had reservations about it—it was Lucille who insisted that Ruby get the opportunity for equal education—and not just for her, but for all Black children. She knew the importance of what they were doing. And not only was she willing to do it, but she was able to instill into Ruby the character qualities she needed to be able to withstand it all.


My Story: Mrs. Lucille Bridges (The Power of Children)

Ruby Bridges shared a short tribute to her mother in her announcement of her passing on Instagram. She wrote, “Today our country lost a hero. Brave, progressive, a champion for change. She helped alter the course of so many lives by setting me out on my path as a six year old little girl. Our nation lost a Mother of the Civil Rights Movement today. And I lost my mom. I love you and am grateful for you. May you Rest In Peace.”

Rest in peace and power, Mrs. Bridges. Thank you for your leonine heart that pushed us forward as a nation and served as an example of strength and bravery to us all.