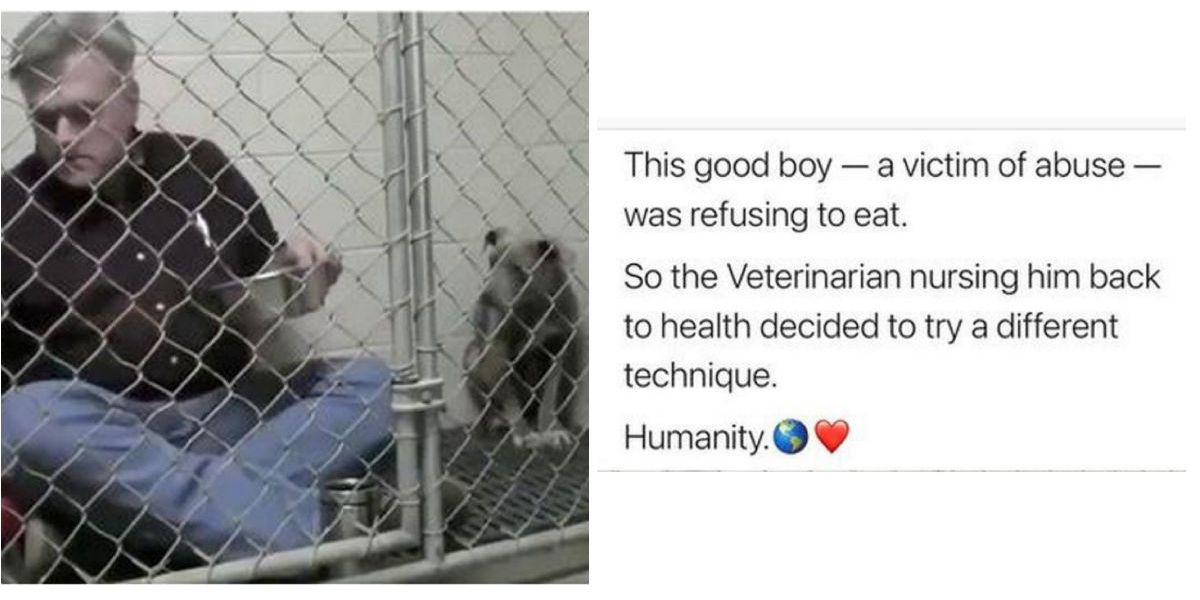 Acts of kindness and compassion are always inspiring. A veterinarian gave a different spin on the phrase “if you can’t beat ’em, join ’em”.

The poor little pup in this video walked into this shelter with a history of being abused. He was so traumatized that he wasn’t eating. The vet treating him wasn’t sure what to do, so he decided to book a table for two: a the dog’s place. It is not clear whether he got an official invite from the canine in question, but he felt pretty safe about showing up unannounced. He walked into the cage and sat down next to the dog. With his back up against the corner of his new (and hopefully temporary) domain, the rescue stared apprehensively at his human guest. The vet presented a dog dish with food and put it in front of the dog. The frightened pup just looked at the dish and made no attempt to eat. Then he broke out another dog dish identical to the one he just gave to his four-legged patient and started eating out of that bowl. And then came the turning point.

The man calmly took a bite to gain trust and develop a connection. Then he reached down and pulled a kibble out of the bowl in front of the dog and held the offering in his open hand. After a pause, the dog ate the nugget out of his hand. Then the vet did it again, and the dog ate that kibble, as well. The man then went back to eating out of his own bowl. That was when the pup looked at him, realized it was safe to eat and started to eat out of the dish given to him.

There is just something about the connection between humans and dogs. I have two. One of them is a rescue who bounced around from home to home because no one cold handle her so I took her when she was two years old. She was afraid of brooms which tells me it was probably the method with which someone saw fit to discipline her. She had no reason to trust me, but yet the moment I met her to take her to her new home, she jumped in my car with such joy. Yes, she was energetic, but it was because she was cheerful. Imagine getting in trouble for being too happy. I can safely say without bias that she is one of those dogs that everyone seems to love. And she loves them right back. In fact, I am pretty sure that girls I have dated have stayed with me a little longer than they would have just because they didn’t want to break up with my dogs, too.

My other dog is a beagle mix who I adopted at 8 weeks and has absolutely no idea how good he has it. I have cooked chicken and put it in his bowl for dinner. Yes, the same chicken you and I eat and he looks up at me as if disappointed that the balance of saffron and garlic was just a little off, and that makes him hysterical. They are family members and not pets, which is exactly the compassion that our hero in the video showed. My hope is that people can learn from his actions of kindness. Be the change. And you don’t even have to eat dog food to do it.

Never heard of Cecelia Payne, the woman who literally discovered what the universe is made of? You’re not alone.
Man gets his cable bill reduced by serenading customer service with a catchy song