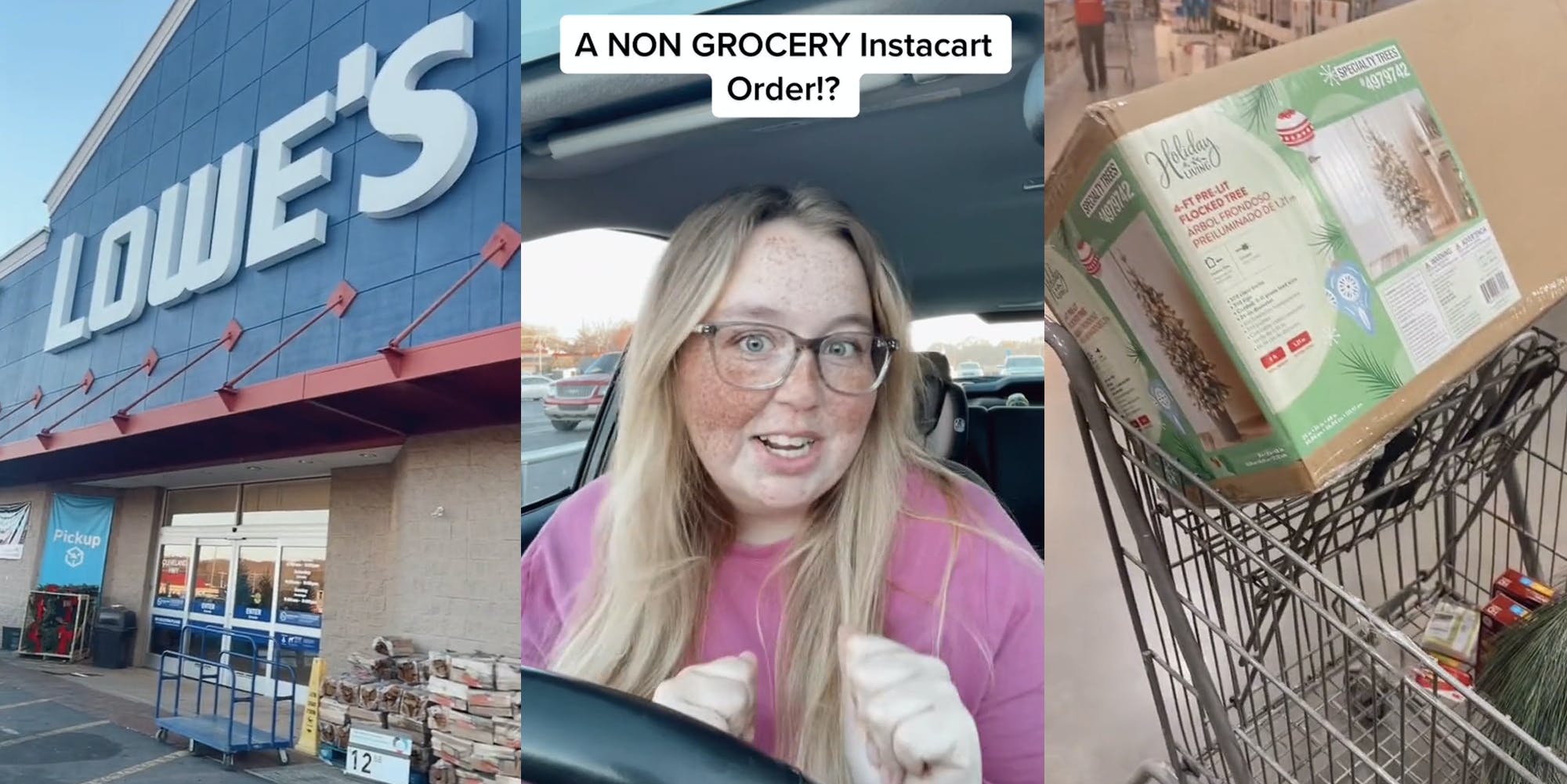 With the holidays slowly approaching, most people want their Christmas items as soon as possible. Since most places are crowded, people have been using different apps to have their stuff delivered, the most popular one being Instacart. In a viral TikTok, an Instacart shopper records her journey shopping inside Lowe’s for Christmas items, including a mini Christmas tree.

The video starts off with shopper Jessica Higgs (@jessicahiggs3) inside her car.

“So, I just got an order for Lowe’s. Not Lowe’s foods. Lowe’s home improvement,” Higgs says, shifting her camera to reveal the Lowe’s building.

Higgs states how she “doesn’t know where to look in Lowe’s” but the order was “$44, three miles, and five items” so she says she accepted it. Then Higgs embarks on her adventure through Lowe’s, taking her 201,000 followers with her.

The camera shifts to Higgs walking inside Lowe’s, going on a quest for the holiday items. She picks up a Command hook and a lightbulb. After going on a scavenger hunt, she discovers the other items she was searching for: a wreath, a four-foot Christmas tree, and batteries. She concludes the video by explaining how the order was broken down: Instacart paid her $7 for the order being three miles away, and she got paid $36 in tips.

During an email interview with The Daily Dot, Higgs shared how this took place in Dalton, Georgia at Lowe’s Home Improvement. Despite working for the grocery delivery app for five years, she said non-grocery batches are “rare.” According to Higgs, this order took half an hour to complete.

The video garnered over 543,000 views as of Saturday, with many viewers praising Higgs and other Instacart shoppers.

“As someone with chronic illness – you’re doing the lord’s work! Some days we just can’t walk the store or deal with the fluorescent lights or do any peopling – and you’re saving us the guilt of not getting things done,” one viewer shared.

“As someone with 5 kids and cries when I have to take them shopping…thank you!” a second commended.

“This person 100% is in their pj’s, in the Christmas spirit, and wants nothing to do with the outside world today. You’re their hero,” a third wrote.

“Girl I Instacart EVERYTHING. Container store? Yes. Best buy? ABSOLUTELY. Y’all save me from dealing with my disability and with people. #tipperlife,” another said.

Instacart shoppers shared their experiences with orders from Lowe’s.

“Me and my bf got a Lowe’s order for two plants for outside for $60 one time,” one person shared.

“Girl I get it! I did an order at Lowe’s for just a plunger. They were going through it I just know,” a second wrote.

The post ‘A NON grocery Instacart order?!’: Instacart shopper says she got an order for a Lowe’s Christmas tree appeared first on The Daily Dot.

Top 10 customer hacks making workers’ lives miserable
‘I didn’t ask you to tell me the biggest f*cking bummer news in the world’: Twitch streamer berates viewer after she commented that her mom died
Advertisement