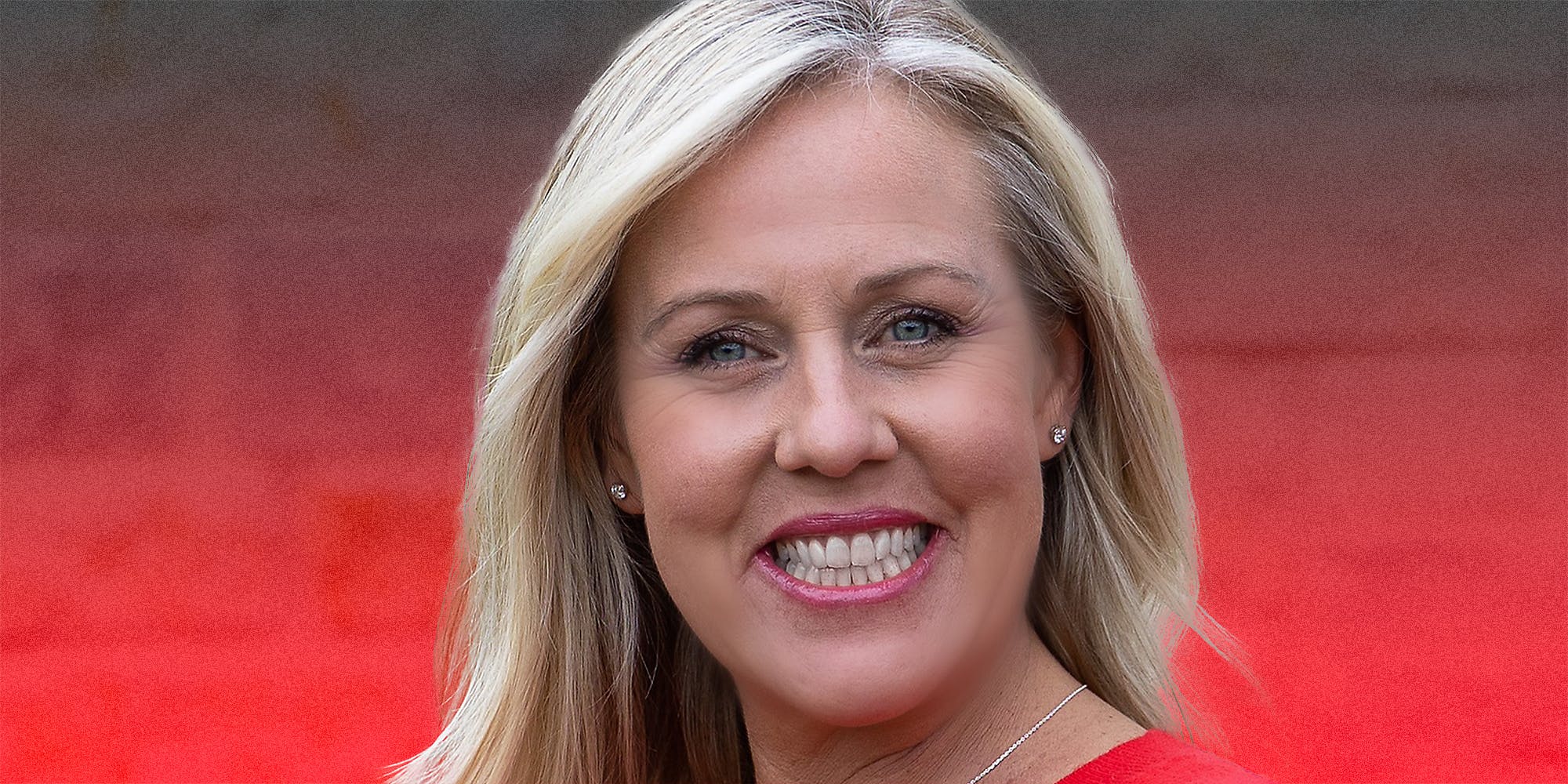 Kara Q Bell is a school board candidate in an affluent suburb of Austin, Texas. She’s also a staunch anti-masker recently charged with assaulting a department store employee and, her critics say, a QAnon conspiracy theorist. If true, she’s part of a wave of QAnon followers seeking political office nationwide.

Bell denies believing in QAnon, a conspiracy theory that a satanic, cannibalistic cabal of pedophiles controls the planet, to whom former President Donald Trump is a sort of messiah fighting the cabal.

“I am not a ‘QAnon,’ whatever that means, my maiden name starts with Q,” Bell told the Daily Dot via text message, which does appear to be true. “Please stop promoting bullying. It’s tearing our community apart and our children deserve better.”

On Twitter, Bell has repeated QAnon beliefs and interacted with proponents of the conspiracy theory, including Ron Watkins, In the Matrixxx, @Qanon_Report, and @Storm_Truth. All four have been suspended from the platform.

Provided with screenshots of her tweets, Bell did not deny ownership of the account, @KaraQBell1, which she locked earlier this month. Some of her tweets have been saved on the Internet Archive.

“Where we go one, we go all is actually from the 1996 movie White Squall,” she said in reference to her retweet of the popular QAnon slogan, often abbreviated to WWG1WGA. ”QAnon’ did not coin that phrase, more falsehoods being spread.”

While it’s true that it does come from the movie, the phrase was practically non-existent in the popular lexicon until Q believers made it trend.

Like many QAnon followers, Bell is a prolific user of social media. She’s tweeted 11,000 times since joining Twitter in Nov. 2019, per her archive. Bell repeatedly tweeted at Watkins, whom many believe long played the role of the supposed government insider, Q.

“Dear Lord, please surround Ron with Warrior Angels! Give him the stamina and focus he needs to complete his work,” she once posted. “Thwart off any darkness standing in his way. In Jesus’ name, we pray! @CodeMonkeyZ we love and appreciate all you are doing! #Freedom #SayNoToChina.”

Kara Bell told the Daily Dot she believes Watkins, whose handle was @CodeMonkeyZ, is simply “a hacker trying to share information.”

The board of Lake Travis Independent School District, on which Bell seeks a seat, is tasked with setting school policies, budget, and choosing the superintendent. COVID-19 safety protocols—deciding whether to open schools, extend distance learning, and require masks—are under its purview. Members serve three-year terms. It sits just outside Austin, Texas, and has over 11,000 students under its purview.

Bell, a mother of two who moved to Texas from California two years ago, says she’s running because she’s “always wanted to work with children.” On her campaign website, she states, “I will always put our children first and protect the most vulnerable. I will not be bullied and I will not back down for what is right.”

But someone with such disconcerting politics joining a Texas school board is a more alarming issue than one might think. Because of its size, Texas has an outsized voice in national education policy. Textbooks that are distributed in schools across the country are often printed in line with what Texas’ Board of Education wants. The state frequently casting itself as the voice of the right-wing in hot-button issues, such as race relations, LGBTQ rights, and climate change, a regressive anchor on the nation’s children.

On Twitter, Bell once referred to critical race theory (studying history through a lens that includes the impact of slavery) as “Marxist.” She also once tweeted, “…[A] woman is a woman, not a transgender.” If elected, her views could theoretically influence state and national education policy.

Last April, she tweeted conspiracy theories about Bill Gates using aborted tissue to make vaccines, hanging out with Jeffrey Epstein, and making “commercials promoting cannibal satanic worshippers.” QAnon followers have a fixation on Gates. Bell stands by her opinion of one of the world’s most philanthropic people.

“Bill Gates is an evil man who donates millions to the [Centers for Disease Control and Prevention],” she said to the Daily Dot. “This is not QAnon, this is fact.”

Harboring suspicions of the CDC is another characteristic Bell shares with QAnon. Similarly, her Twitter history, which the Daily Dot reviewed before she locked her account, indicates that she’s suspicious of vaccines and categorically against mask mandates.

Students across the country are required to have a number of vaccines before attending school. Having a prominent anti-vaxxer on a school board most likely wouldn’t end that practice, but it does show how ingrained the pernicious movement is becoming.

Before locking her account, Bell repeatedly tweeted a letter she received from the CDC in response to her inquiry about data proving masks work. The letter states that there haven’t been any randomized control trials on the efficacy of masks at suppressing the spread of COVID-19 and includes links to data demonstrating that masks block particles

Bell seems to have taken the letter as proof that masks are ineffective.

Earlier this month, a video went viral of Bell talking to police after being escorted from a Nordstrom Rack for refusing to wear a mask and allegedly shoving an employee. She told police that they “were not going to put [their] disgusting rules” on her, that she’s “a Christian woman of God,” and admonished them, “I will not have it. You understand that. I will not have it.”

Officers then put her in handcuffs. Bell was ultimately charged with assault, police say.

The Sunset Valley Police Department said in a release, “According to the store employee, the female shoved her when she tried to prevent her from entering the fitting area.”

“…The woman refused to identify herself and made several comments about white people being discriminated against and being a ‘woman of God.'”

Police say they eventually identified the woman as Bell. Bell has often sounded off on race on social media. Black Lives Matter is a frequent target of her ire. She once tweeted, “The #BlackLivesMatter movement is dividing us faster than any other.”

On Facebook earlier this year, she equated mask mandates with slavery, according to a screenshot provided to the Daily Dot.

Some who live in her district are worried that, in spite of the charges, viral video, and conspiracy theories, Bell will win the election.

“This woman wants to be elected to the school board and she’s an obvious QAnon follower with her conspiracy theories,” one woman commented on a local news report about Bell’s arrest.

“She has been banned from a bunch of local social media groups and even speaking at [Lake Travis Independent School Board] meetings,” said a redditor who claims to live in Bell’s neighborhood. “Despite this, her signs are all over the place out here—mostly at intersections and roadsides, but there’s a fair share of homes with them, too.

“If you can, for the sake of all of us, please vote against her during this coming election. I fear we’re going to repeat 2016 out here.”

There’s a wave of QAnon candidates for local office. Over the weekend, prominent early QAnon promoter Tracy “Beanz” Diaz won a leadership position with a county GOP in South Carolina. Time magazine reports that dozens of QAnon believers have been elected in recent months.

Days after Bell’s Nordstrom Rack incident, a group of protesters showed up at the store and refused to wear masks.

“When officers contacted the individuals, they made comments about medical conditions, discrimination against white people and asking what if they were Black,” police said in a release. One of the protesters is also running for the state legislature.

Early voting in the school board race concludes on April 27. The election will be held on May 1.

The post A strident anti-mask QAnon believer was accused of assault—now she may win a seat on a local school board appeared first on The Daily Dot.