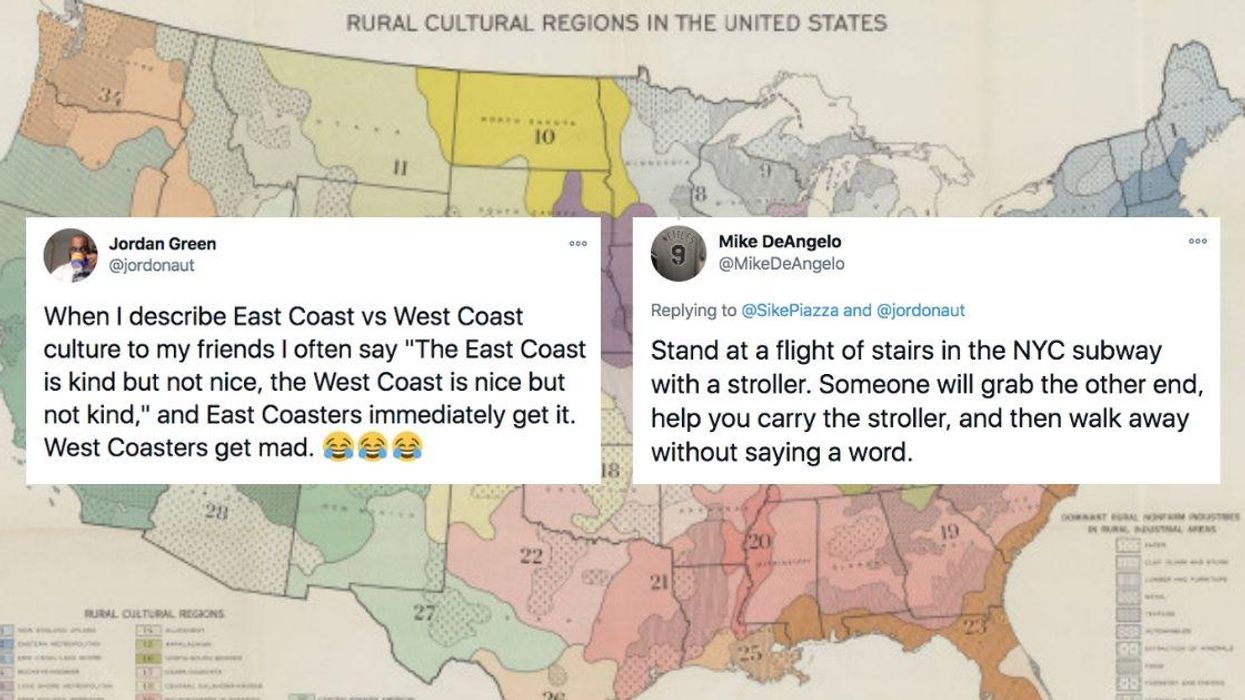 Having lived in small towns and large cities in the Pacific Northwest, Southwest, and Midwest, and after spending a year traveling around the U.S. with my family, I’ve seen first-hand that Americans have much more in common than not. I’ve also gotten to experience some of the cultural differences, subtle and not-so-subtle, real and not-so-real, that exist in various parts of the country.

Some of those differences are being discussed in a viral thread on Twitter. Self-described “West coaster” Jordan Green kicked it off with an observation about East coasters being kind and West coasters being nice, which then prompted people to share their own social experiences in various regions around the country.

Niceness is saying “I’m so sorry you’re cold,” while kindness may be “Ugh, you’ve said that five times, here’s a sw… https://t.co/HjUDcAr9v9

Niceness is saying ‘I’m so sorry you’re cold,’ while kindness may be ‘Ugh, you’ve said that five times, here’s a sweater!’ Kindness is addressing the need, regardless of tone.

I’m a West Coaster through and through—born and raised in San Francisco, moved to Portland for college, and now live in Seattle. We’re nice, but we’re not kind. We’ll listen to your rant politely, smile, and then never speak to you again. We hit mute in real life. ALOT.

So often, we West Coasters think that showing *sympathy* or feeling *empathy* is an act of kindness. Sadly, it’s really just a nice act. Kindness is making sure the baby has a hat. (s/o to breenewsome and BlackAmazon)

When you translate this to institutions or policy, you’ll see alot of nice words being used, & West Coast liberals/radicals are really good at *sounding* nice. But I’ve seen organizers & activists from other places get frustrated because nothing happens after ALOT of talk.

When you translate this to institutions or policy, you’ll see alot of nice words being used, & West Coast liberals/… https://t.co/lfjUVV3N1M

Nothing happens after the pronoun check-ins and the icebreakers. It’s rare we make sure that people’s immediate needs are addressed. There’s no kindness. You have people show up to meetings hungry, or needing rides home, and watching those with means freeze when asked to help.

As we begin to ‘get back a sense of normalcy’ or ‘re-calibrate’ to what people in Blue States™ think is Right™ and Just™, I want us to keep in mind the difference between Niceness and Kindness. If something sounds nice, doesn’t mean that it’s kind.”

Of course, there are genuinely kind and surface nice people everywhere you go, so no one should take these observations as a personal affront to them individually. Generalizations that lead to stereotypes are inherently problematic, and broad strokes like “East coast” and “West coast” are also somewhat meaningless, so they should taken with a grain of salt as well.

In reality, a small town in South Carolina is probably more culturally similar to a small town in Eastern Oregon than it is to New York City, and there are some strong differences between various subregions as well. A more specific cultural comparison, such as “big cities on the West coast vs. big cities in the Northeast” might be more accurate as far as generalizations go, but regardless, many people related to Green’s observations based on their own experiences.

To kick things off, a slew of responses poured in from people describing how New Yorkers can be cold on the surface while simultaneously reaching out their hand to help you.

@SikePiazza @jordonaut Stand at a flight of stairs in the NYC subway with a stroller. Someone will grab the other e… https://t.co/SJw7v44JNO

Several people explained that the hustle required to afford the expense of living in New York explains why people skip the niceties. It’s about valuing people’s time; wasting it with nice words is ruder than just quickly helping out and then moving on.

@jordonaut In the South, politeness takes the form of “I will talk to you and inquire as to your day; I will give m… https://t.co/SQIZ6l6m1d

Many people chimed in with agreement with the original post (even some Canadians confirming that their East/West differences aligned with ours).

@candaceforpdx @jordonaut I used to travel to the West Coast a lot for work. Everyone was “nice,” but they had no s… https://t.co/XCL1ctXPqw

“No sense of urgency” is definitely a West coast vibe, but is generally viewed a positive out here. And “inconveniencing everyone around them” might be a subjective observation. Maybe.

Plenty of people with bicoastal experience weighed in with their stories of how their experiences lined up with the basic premise of the thread, though.

@jordonaut I am blunt, I cuss, I call shit like I see it, and if you need it I’ll give you the shirt off my back, a… https://t.co/e65qSQmZgZ

@KLDoorC @jordonaut This. I’m from Pgh and talking to my friend in Seattle.. She lives by herself and needed some… https://t.co/goTpXS6iEU

Though certainly not universally true, the tendency for West coasters to be more hands-off might extend back to the frontier days. The pioneer and gold rush mindset was necessarily individualistic and self-sufficient. In my experience, West coasters assume you don’t need help unless you directly ask for it. But people don’t ask because of the individualistic and self-sufficient thing, so automatic helpfulness just hasn’t become part of the dominant culture.

Things got even more interesting once the South and Midwest entered the chat.

But the takes on warm/nice/kind thing varied quite a bit.

@alexschiff @zsr5 @jordonaut I moved to Michigan after spending my whole life on the East Coast. It took me MONTHS… https://t.co/fosthutYdJ

One thing that seems quite clear if you read through the various responses to the thread is that specific states and cities seem to have their own cultures that don’t break down as simply as East/West/Midwest/South. There’s an entire book about how the U.S. can actually be subdivided into 11 different regions that are almost like nations unto themselves. Even this map from 1940 included 34 different cultural regions in the U.S.

And don’t even get a Californian started on the differences between Northern CA, Southern CA, and the Central Valley. “Culture” can even be narrowed down even to specific neighborhoods, and people’s experiences and perceptions vary for all kinds of reasons, so once again, generalizations only go so far before they fall flat.

If you’re curious about what the data says about all of this, a cursory search of surveys about which states are the kindest brings up a fairly mixed bag, but people seem to find Minnesota quite friendly. A Wallethub ranking of charitability by state based on 19 factors including volunteerism also placed Minnesota at number one, followed by Utah, Maryland, Oregon, and Ohio. Pretty hard to make a regional generalization with those states.

Then again, there’s the whole “Minnesota nice” thing, which brings us full circle back to the original thread.

@SejalShahWrites I’m from Minnesota, where we have a whole theme of how “Minnesota Nice” means only on the surface.

So many elements go into the culture of a place, from population density to the history of settlement to the individual personalities of the people who make someplace their home. And nothing is set in stone—the atmosphere of a place can change over time, as anyone who’s visited a city a decade or two apart can attest.

One thing that’s true, no matter where we live, is that we play a role in molding the culture of our immediate surroundings. If we want where we live to be friendlier, we can be friendlier ourselves. If we want to see people help one another, we can serve as that example. We might stand out, but we also might inspire others who yearn for the same thing.

“Be the change” might seem a bit cliche, but it truly is the key to shifting or world in the way we want it to go, no matter what part of the country—or the world—we live in.

Dr. Fauci sounds downright thrilled to do his job without battling anti-science propaganda
Jill Biden brought cookies to National Guard troops to thank them for keeping her family safe
Advertisement