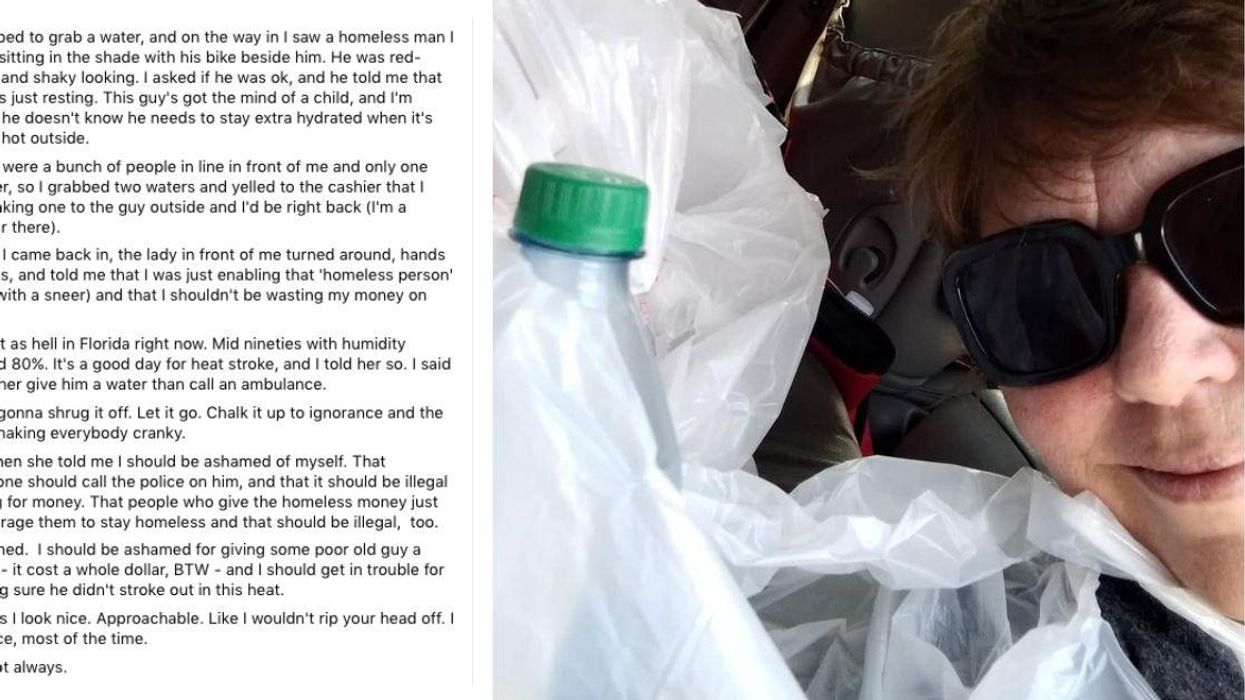 Sometimes it can be hard to figure out what the right thing to do is. But other times it’s incredibly simple.

When Barbara Mack saw an unhoused man suffering in the Florida heat outside a convenience store, giving him a bottle of water was simply the right thing to do. But unfortunately, not everyone saw it that way.

Mack shared the story of a woman criticizing her for her act of kindness—and the awesome reaction of those who witnessed it all—in a Facebook post that’s gone viral.

“I may have inadvertently started a revolution in the convenience store today.

I stopped to grab a water, and on the way in I saw a homeless man I know sitting in the shade with his bike beside him. He was red-faced and shaky looking. I asked if he was ok, and he told me that he was just resting. This guy’s got the mind of a child, and I’m afraid he doesn’t know he needs to stay extra hydrated when it’s super hot outside.

There were a bunch of people in line in front of me and only one cashier, so I grabbed two waters and yelled to the cashier that I was taking one to the guy outside and I’d be right back (I’m a regular there).

When I came back in, the lady in front of me turned around, hands on hips, and told me that I was just enabling that ‘homeless person’ (said with a sneer) and that I shouldn’t be wasting my money on him.

It’s hot as hell in Florida right now. Mid nineties with humidity around 80%. It’s a good day for heat stroke, and I told her so. I said I’d rather give him a water than call an ambulance.

I was gonna shrug it off. Let it go. Chalk it up to ignorance and the heat making everybody cranky.

Ashamed. I should be ashamed for giving some poor old guy a water – it cost a whole dollar, BTW – and I should get in trouble for making sure he didn’t stroke out in this heat.

I guess I look nice. Approachable. Like I wouldn’t rip your head off. I am nice, most of the time.

And I lost my temper.

I told her to call a cop and report me for buying shit at a convenience store.

I told her that I wasn’t in the damn mood for crazy right now. That it’s a hundred fucking degrees outside, and I’m hot and tired and sick to death of stupid people. That if she had an ounce of compassion in her whole body, she’d buy him a cold drink, too. That maybe she should figure out why she needs to accost complete strangers. And how’s about after that, she back the fuck up outta my face and outta my business and turn back around and not say one more damn word to me.

I’m just about deaf in one ear. I try to modulate my voice. Unless I get angry.

It got pretty loud there at the end. There was dead silence in the store and then someone said loudly “For real!”

And the guy at the front of the line told the cashier to add a sandwich to his purchases for the guy outside.

The guy behind him bought an extra ice cream. The girl behind HIM got change for a twenty ’cause that guy could probably use some cash.’

Every single person in line got him something. Every one, except the now very embarrassed lady in front of me, who slunk out without saying another word.

When I got to the cashier, she didn’t charge me for either of the waters, because she was going to take him one anyway. And mine was free because of the entertainment.

When I went outside, he was eating his ice cream and drinking his water with a pile of stuff all around him, a big old grin on his face. He didn’t look shaky anymore.

And there, people, is the story of why I hate people. And why I love people. All in the same damned minute.

I sat in the car and drank my water and laughed with tears in my eyes, same as I’m doing now.”

Mack’s story has been shared more than 127,000 times, and she has also shared a follow-up post sharing a bit about herself and saying that the positive feedback she’s received about the story has been “beautiful.”

“I don’t have a lot extra,” she wrote. She lives in a small camper in an RV park and lost her earring-selling business in the pandemic. She’s a sculptor as well, and she had about a dozen art shows canceled in 2020. She sells antiques and art on Etsy, works doing meal delivery, and also does some freelance writing. She knows what it’s like to struggle.

“Basically, I am doing everything I can to keep myself together,” she wrote. “Because I’m all over the place delivering food, I see a lot of homeless people. That could have been me on the side of the road, if I hadn’t been lucky. I remember that, every day.”

She also included some information about the man she helped.

“I talked to the homeless guy, and he doesn’t want a picture up,” she wrote. “Also, I spoke with his social worker. She told me it would be good if this emphasized that he’s had 2 home placements and he just does not do well being indoors. His disability doesn’t keep him from making that decision, and he does receive a small check each month, which she helps him with.”

Thank you, Ms. Mack, and the rest of the customers in that convenience store, for leading by example.

How to help kids socialize in a post-lockdown world
The power of art: Bill Murray shares how a painting prevented him from committing suicide
Advertisement