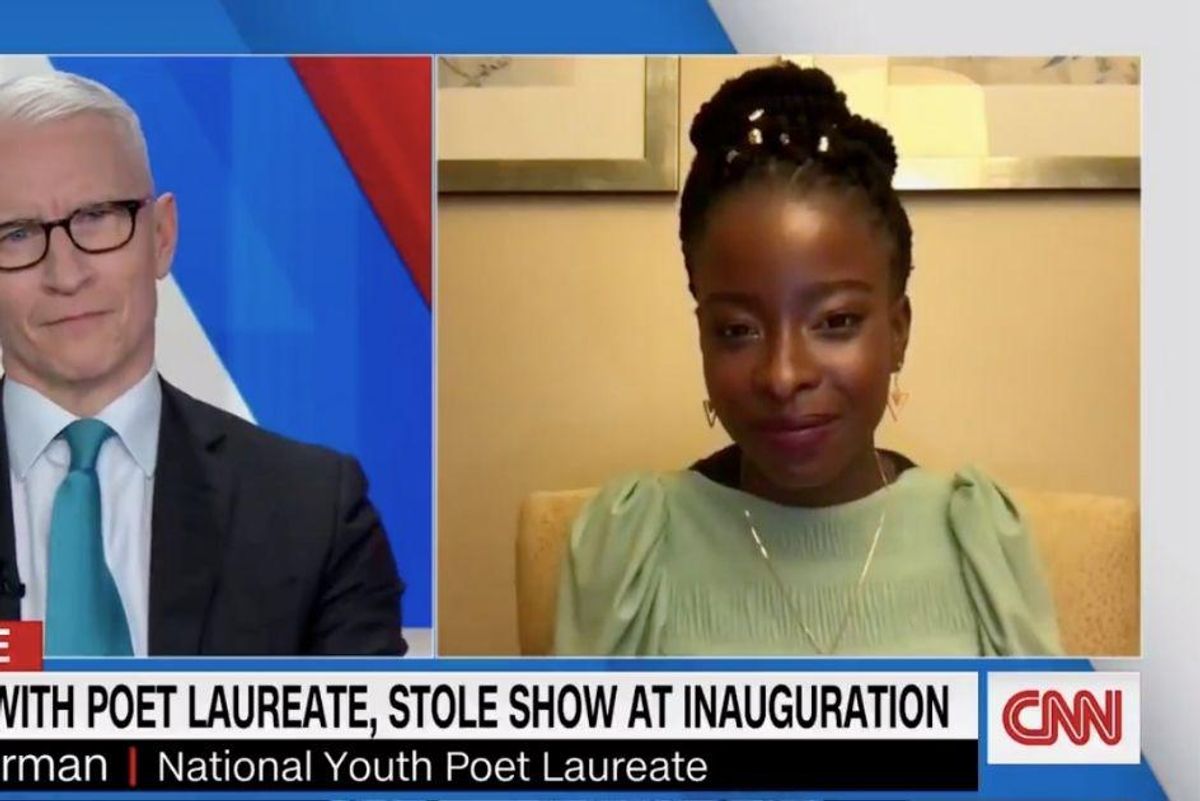 Anderson Cooper has interviewed hundreds of people, from top celebrities to heads of state to people on the street. He is fairly unflappable when it comes to chatting with a guest, which is what makes his reaction while interviewing inaugural poet Amanda Gorman all the more delightful.

Gorman stole the show at President Biden’s Inauguration with a powerful performance of her original poem, “The Hill We Climb.” People were blown away by both her words and her poise in delivering them, especially considering the fact that she’s only 22 years old. But it’s one thing to be able to write and recite well, and another to be able to impress in an off-the-cuff conversation—and Gorman proved in her interview on Anderson Cooper 360 that she can do both at a level most of us can only dream of.

In the interview, Gorman explained how she dove into research to prepare her poem to fit the occasion, and then how that work was disrupted by the attack on the Capitol.

“I’m not going to say that that completely derailed the poem, because I was not surprised at what had happened,” she said. “I had seen the signs and the symptoms for a while, and I was not trying to turn a blind eye to that. But what it did is it energized me even more, to believe that much more firmly in a message of hope and unity and healing. I felt like that was the type of poem that I needed to write and it was the type of poem that the country and the world needed to hear.”

After explaining how she used tweets and articles and messages about the Capitol insurrection to hone parts of her poem, she shared thoughts on reclaiming the power of words.

“To me, words matter. And I think that’s kind of what made this inauguration that much more sentimental and special. We’ve seen over the past few years the ways in which the power of words has been violated and misappropriated, and what I wanted to do was to kind of reclaim poetry as that site in which we can repurify, resanctify not only the Capitol building that we saw violated, but the power of words, and to invest that in kind of the highest office of the land.”

Cooper and Gorman discussed the last few lines of her poem before delving into Gorman’s speech impediment. Cooper shared that he himself had a form of dyslexia and a slight stutter as a child, and Gorman shared that even up until a few years ago she would drop entire letter sounds from her speech. In fact, she said, writing and reciting poetry served as a kind of speech pathology for her. The “R” sound gave her particular trouble even into college, so she would practice singing along with the song “Aaron Burr, Sir” from Hamilton because it contained so many “R” words. (She also included allusions to Hamilton lines in her inaugural poem, which Ham fans quickly noted.)

But the part of the interview that got Cooper tongue-tied was when Gorman shared the mantra she says before every performance. Watch:

Poet Amanda Gorman tells CNN’s @AndersonCooper that the Capitol riot inspired her to write a “message of hope, inge… https://t.co/g98p9dxhQM

Gorman said she closes her eyes and says, “I am the daughter of Black writers. We are descended from freedom fighters who broke their chains and changed the world. They call me.”

Cooper had to take a moment before saying, “Um, wow…just…you’re awesome. I’m so transfixed.” So funny to see one of television’s most familiar faces being so awestruck. He’s not the only one, though. She is truly mesmerizing.

“Your mom must be so proud of you,” Cooper added. Gorman mentioned in her poem that she was raised by a single mother, and considering how proud the whole country is of this young woman, her mom is undoubtedly bursting with pride. Gorman shared how “a village” of support has helped lift her up to where she is today, and that her mom was right there with her filming her as she did this interview.

Anderson Cooper was all of us here. Amazed by Amanda Gorman’s talent. Stunned by her grace and wisdom at such a young age. Moved by her personal story. Awed by how she captured this significant moment in our nation’s history so beautifully.

Pure brilliance. We will definitely be keeping our eye on Ms. Gorman as we work to build the brighter future she envisioned for our nation.