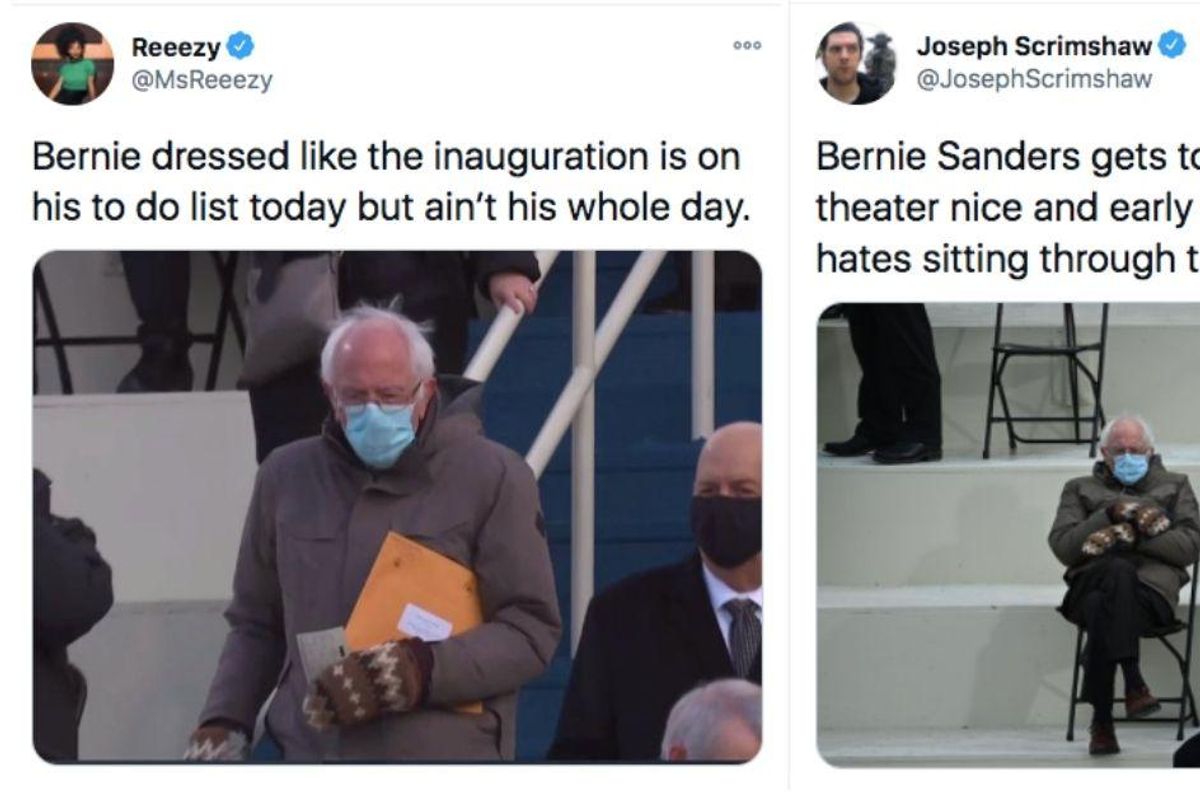 If Bernie Sanders isn’t the realest dude to ever serve in Congress, I don’t know who is.

We got to witness Bernie’s down-to-earth, let’s-get-to-work, cut-the-crap personality in all its visual glory at Joe Biden’s inauguration today. While pundits fawned over the sharp and colorful stylings of the attendees, Uncle Bernie sauntered looking like he was on his way to run some errands and decided to stop in for a sec to see the new president sworn in.

Clad in what is probably his one winter coat and a pair of hand-knitted mittens, he looked perfectly comfortable, even as he stood out from the crowd of formal, designer coats and gloves. Ah, Bernie. You’re just so…Bernie. It’s a big part of why the guy has such a dedicated fan base. What you see is what you get, and he makes no apologies for being exactly who he is at all times.

But today of all days, as the nation waited with bated breath to witness the transfer of power from President Trump to President Biden, especially in the wake of an attempted violent coup and under the specter of an ongoing pandemic, Bernie’s Bernieness came as a particularly welcome delight. This event could not have been more serious or weighty in its significance, and yet along comes Bernie reminding us that we’re all just human beings here, none of us more or less important than the other.

His look launched a thousand memes that provided some needed comic relief for the day. I mean, how could it not?

And this is how Bernie Sanders stole all the attention at inauguration 😂 This is what you call a showstopper 😂🤣❤️ https://t.co/so40jGmYUr

“Bernie dressed like the inauguration is on his to-do list today but ain’t his whole day.” That pretty much nails it. “Inauguration? Check. Post office? Check. Do I have time to hit Home Depot? Well, I don’t like to drive in the dark so we’ll see.”

He was undoubtedly happy to be there, but it’s easy to read his body language as “Are we done yet? I don’t have time for this hullabaloo. We’ve got work to do getting healthcare to the people.”

“This could have been an email” https://t.co/1nRtxO4eiq

Some got creative with where they imagined Bernie to be, such as showing up early to the movies.

@JosephScrimshaw Very Bernie voice: “I always bring my own snacks. These concession prices? CRIMINAL, and that’s all I’ll say.”

Some started photoshopping him into various places, like the park or the DMV.

How about riding the subway, chilling in his headphones? Perfection.

If any of that makes you feel a little jealous, no worries. You too can look like you attended Joe Biden’s inauguration on your way to the post office.

CBS News chatted with Bernie after the inauguration and asked him about the coat and mittens that got everyone talking. Naturally, he explained the practicality of it all. “You know, in Vermont we dress warm. We know something about the cold, and we’re not so concerned about good fashion. We want to keep warm, and that’s what I did today.”

.@BernieSanders talks about his mittens and coat “You know in Vermont, we dress warm, we know something about the c… https://t.co/tHqlgxlCYa

That sentiment was appreciated by other New Englanders who touted the shout out to “our middle class New England tradition of having exactly one heavy winter coat, worn to both formal and casual events.”

I will never forget Bernie honoring our middle class New England tradition of having exactly one heavy winter coat,… https://t.co/q7WJLFwZ7x

The mittens actually have a sweet story behind them. They were given to him by a teacher from his home state when he was on the campaign trail a couple of years ago. And they’re made from repurposed wool sweaters and lined with fleece made from recycled plastic bottles, because of course they are.

Bernie’s mittens are made by Jen Ellis, a teacher from Essex Junction, Vt. She gave them to him 2+ years ago and wa… https://t.co/uQnTbkFwMQ

Keep being you, Bernie. The breath of fresh air you bring to our national politics will always be welcome.