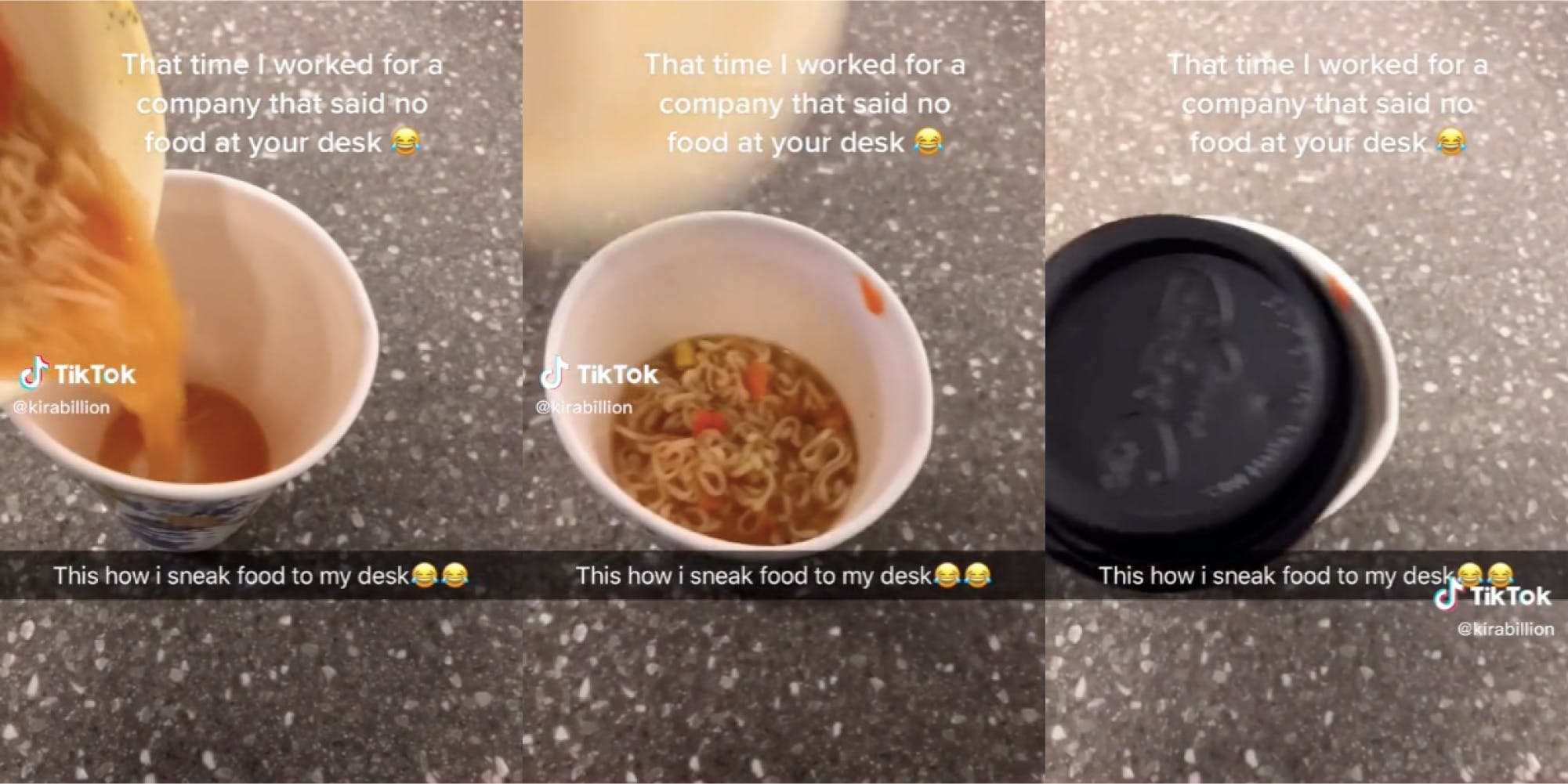 A worker went viral after revealing how her workplace refused to let her eat at her desk. TikTok user Kira Billion (@kirabillion) uploaded the clip where she shared her hack for sneaking food while at work.

In the overlay text, Kira claims that her company doesn’t allow workers to have food at their desks. Undeterred, she bypasses this rule by pouring an entire cup of instant ramen noodles into a disposable coffee cup. She swiftly closes the lid, adding in the overlay text: “This how I sneak food to my desk.”

Kira’s clip has been viewed over 372,000 times as of Monday, with viewers praising her ingenuity in the comments, while others shared how they overcame similar situations while at work.

“I did this at work when I was on the soup wells,” one user shared. “ I’d take small coffee cups and sip chicken noodle broth the entire shift.”

“I would eat it on my lap because it’s not technically on my desk,” another user said.

Another user advised her to, “Get a doctors note saying you get low blood sugar.”

While the rule of eating at one’s desk may vary from workplace to workplace, the health implications caused by it are another story. According to a Wired article in 2020, research suggests eating at your desk cuts into break times needed to recharge. This not only leads to lower productivity since workers aren’t able to get unwind and relax, it can also lead to overeating, the article states.

“If you eat at your desk when you’re distracted through working and you’re not giving yourself a proper lunch break, then the food you eat doesn’t fill you up as much,” Jane Ogden, professor in health psychology, says in the article. “You don’t remember that you have eaten in the same way, and you don’t code food in the same way. You’re more likely to feel hungry in the afternoon and then eat more.”

The article continues that the reason some workers may feel obligated to eat at their desks is that they don’t want to come across as having too light a workload. In fact, the researchers say organizations should encourage their staff to take lunch breaks away from their desks, that way they have time to come back refreshed and energized.

And while it is unclear whether this is the reason Kira’s employer prohibits workers from eating at their desks, it seems some employees prefer the convenience of munching while on the clock.

As Kira wrote in the caption, “Oh baby best believe imma eat at my desk.”

The Daily Dot has reached out to Kira for comment.