‘Bet they won’t do that sh*t again’: TikTok shows girl getting decked in the face after allegedly ‘ruining’ graduate’s cake – Nogagames 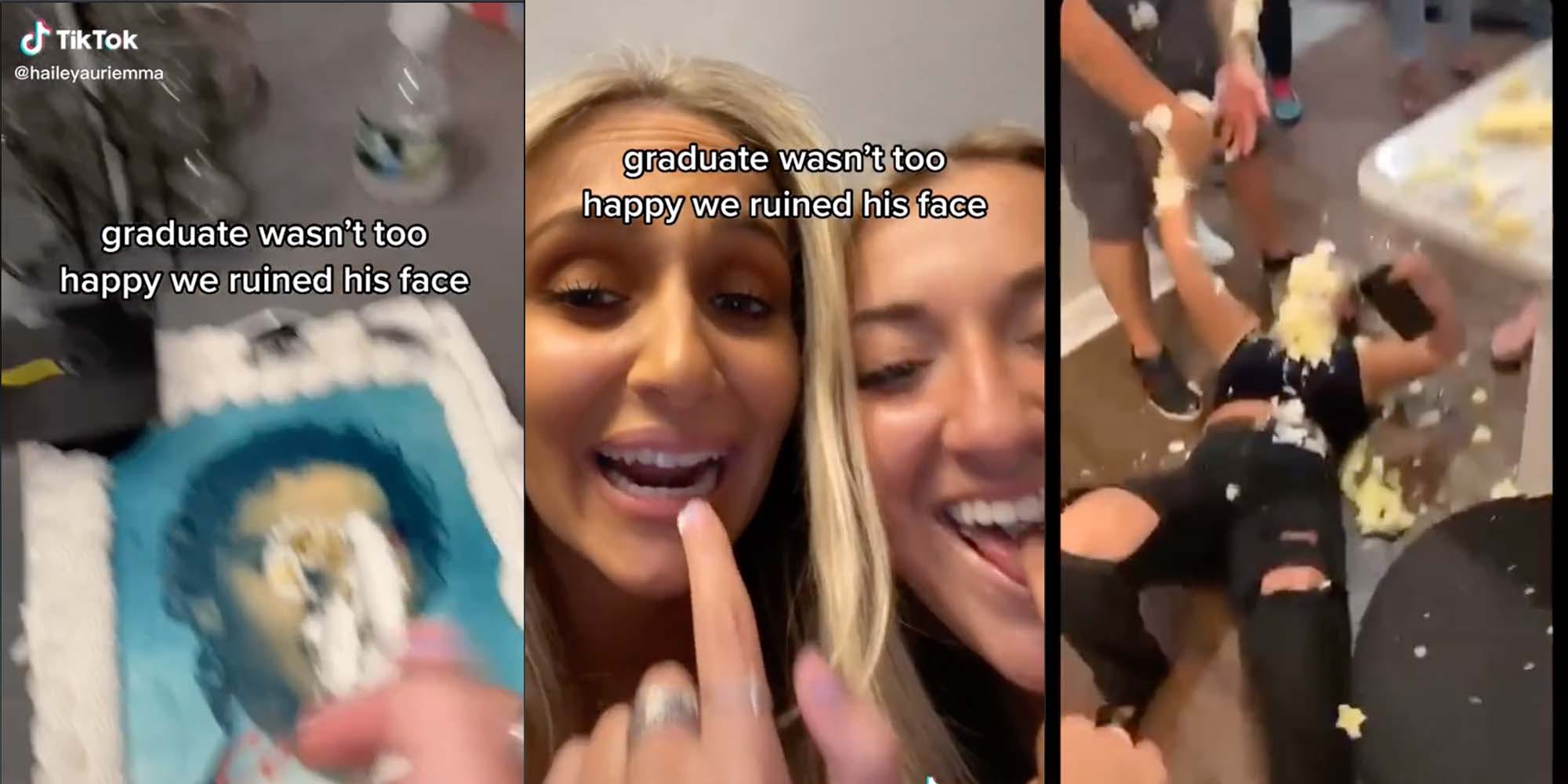 In a viral video set to Kreepa’s “Oh No,” two white women are seen poking at and smearing a graduation cake that features a photo of a high school graduate.

“Graduate wasn’t too happy we ruined his face,” the TikToker says, using the platform’s text-to-speech effect.

What happens next is what viral videos are made of: The viewer sees someone throw the entire cake at one of the women who had sabotaged its design.

Reactions to the video have been overwhelmingly on the side of the person who threw the cake. The TikTok video’s comments are filled with remarks about the cake throwing being deserved, and the replies to a viral tweet that reposted the video are similar.

Following the criticism, the woman who originally posted the video (@Hailyauriemma, or Hailey Jean, on TikTok) followed up with the story behind the infamous cake throwing.

“This is my cousin,” says Hailey Jean, with her arm around the person who threw the cake. “I did not ruin his graduation party. He actually enjoyed throwing the cake.”

Hailey Jean then defended the video by captioning her followup: “You guys have no sense of humor and don’t have the typical brother/sister relationship with your cousin.”

Commenters didn’t let up, though. Many said the cake throwing was still deserved and that they didn’t believe the initial video was a joke, citing the cousin’s body language in the followup video. Hailey Jean commented that she had been receiving death threats because of her initial viral video.

So, the cousin who threw the cake took matters into his own hands. “I enjoyed them ruining the cake, and I thought it was funny as fuck. But don’t bully them,” he says in his own followup video on Hailey Jean’s account.

To further convince her audience, Hailey Jean posted a final video explaining the situation in response to a comment that tells her to “blow [her] brains out!!!”

“The videos were put together to make a funny video. They do not correlate at all,” says Hailey Jean in her final video about the incident before walking back on her previous implications that the graduate was the one who threw the cake. “The boy that threw the cake, it was not his graduation party. It was his brother’s.”

She then says that she and her friend, shown in the original video and first followup, messed with the cake after the party was over and right before it was about to be thrown away. Hailey Jean then says a “cake war” ensued, which led to her cousin throwing the cake at “someone,” who happened to be Hailey Jean’s friend because she was “standing in the line of fire.”

“No one’s mad, I don’t know why any of you are hurt or sending me death threats,” says Hailey Jean.

Hailey Jean did not respond to the Daily Dot’s request for comment.

The post ‘Bet they won’t do that sh*t again’: TikTok shows girl getting decked in the face after allegedly ‘ruining’ graduate’s cake appeared first on The Daily Dot.

‘The one true life hack’: TikTok hack for buttering popcorn blows up—but not everyone’s a fan
People aren’t happy with Rita Moreno for her defense of Lin-Manuel Miranda
Advertisement