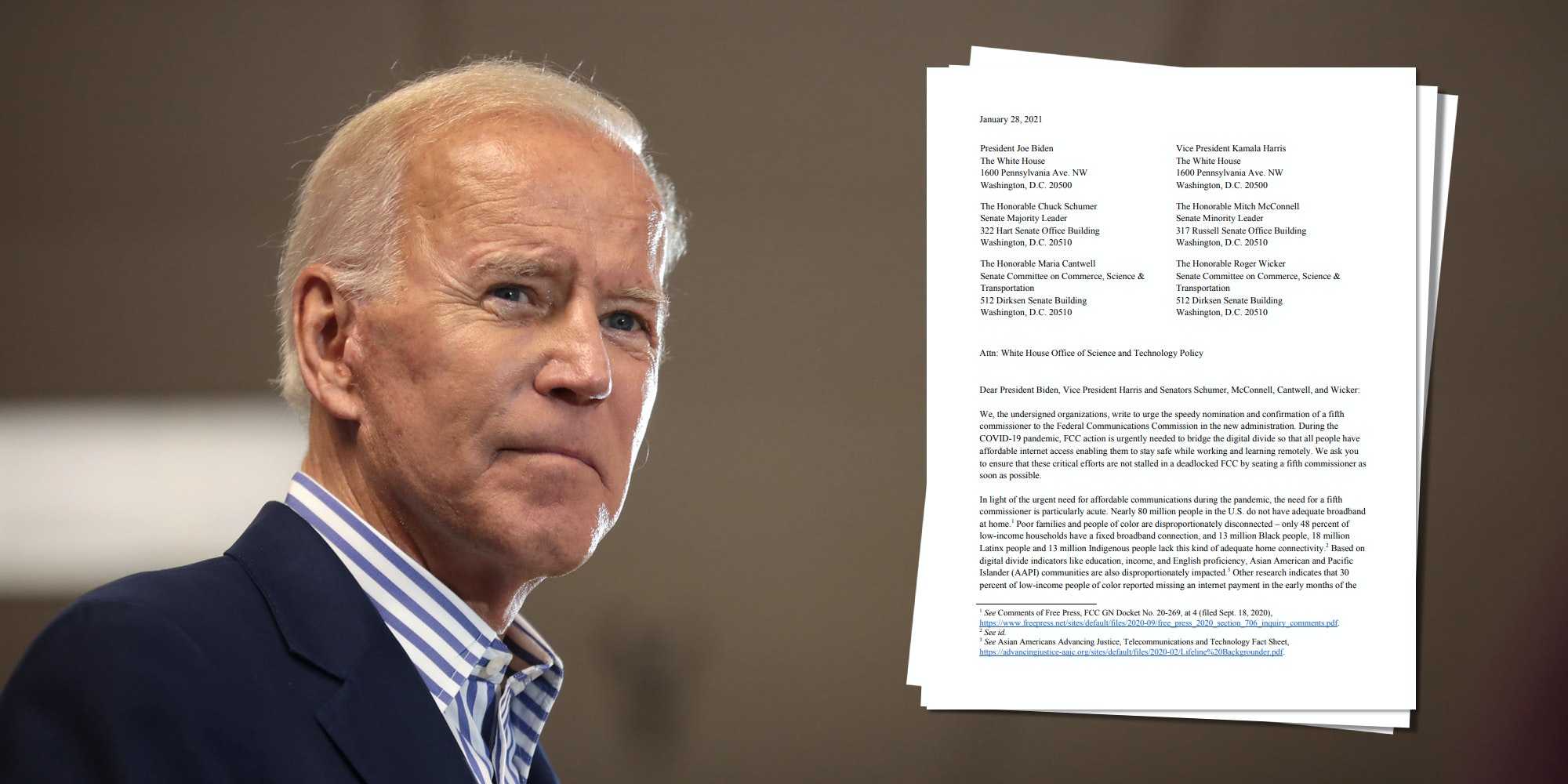 A coalition of more than 30 advocacy groups are calling on President Joe Biden and congressional leadership to fill the final vacancy at the Federal Communications Commission (FCC) immediately.

While Biden recently named Jessica Rosenworcel the acting chairwoman of the FCC, the agency was left with a vacancy when former Chairman Ajit Pai stepped down on Inauguration Day.

Before Pai stepped down, Senate Republicans fast-tracked the confirmation of Nathan Simington, who former President Donald Trump picked to serve at the FCC. Simington’s nomination was fraught with controversy because of his connection to Trump’s much-maligned social media executive order that targeted Section 230 of the Communications Decency Act.

Pai did not act on Trump’s order before departing, however.

Simington’s quick nomination, coupled with Pai leaving, leaves the FCC in a 2-2 deadlock down party lines. The FCC is supposed to have five commissioners, with three from the president’s party and two from the opposite party. Current commissioners include Brendan Carr and Simington, both Republicans, and Geoffrey Starks and Rosenworcel, Democrats.

Biden will be able to nominate a Democratic commissioner to fill out the agency who would need to be confirmed by the Senate.

On Thursday, 32 advocacy organizations argued in a letter to the Biden administration and members of the Senate that there needed to be a “speedy nomination and confirmation of a fifth commissioner to the Federal Communications Commission” so it can tackle issues like the digital divide, which has been highlighted by the coronavirus pandemic, and reclassifying broadband under Title II of the Communications Act.

“We ask you to ensure that these critical efforts are not stalled in a deadlocked FCC by seating a fifth commissioner as soon as possible,” the letter reads, later adding: “Leaving the agency in charge of charting the course for affordable communications access and infrastructure impotent to pursue the bold action required at this time would be a serious failing.”

The groups signing the letter included: the ACLU, Center for Democracy & Technology, Demand Progress, the Electronic Frontier Foundation, Fight for the Future, Free Press Action, Media Justice, the NAACP, the National Hispanic Media Coalition, and Public Knowledge, among many others.

While Biden named Rosenworcel acting chairwoman, it’s unclear whether his upcoming FCC nominee will be someone who would become another commissioner or would take over as a permanent chair.

“There are many pressing reasons to seat a fifth commissioner. The White House and Senate must finish this important work so the agency can repair the damage the Trump FCC created and restore everyone’s rights to connect and communicate,” Free Press Action Campaign Manager Heather Franklin said in a statement.

T.I. and wife Tiny accused of sex trafficking, forcing women to do drugs
That One Sound: The dark origin of ‘Now I’m panicking’ on TikTok
Advertisement