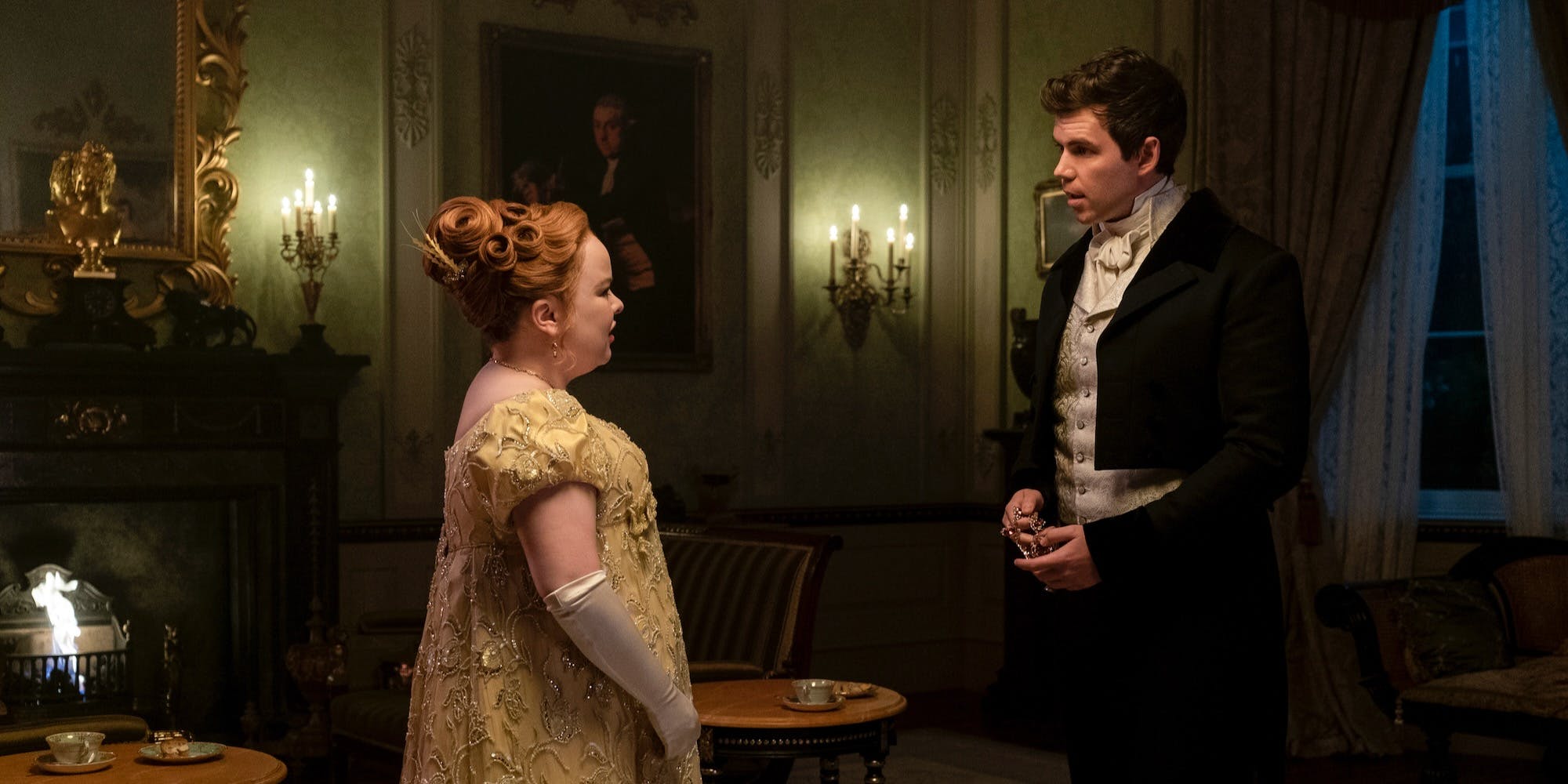 Less than two months after Bridgerton’s second season made waves, it’s already gearing up for season three by revealing just which Bridgerton sibling will find love next—and it’s not the one you’d expect it to be.

So far, Bridgerton, based on the romance books by Julia Quinn that follows the eight Bridgerton siblings as they find love, has been adapted in order. Daphne’s (Phoebe Dynevor) love story kicked off the books and the show, and Anthony’s (Jonathan Bailey) love story followed suit in both mediums. If we follow the conventional wisdom of the books, Benedict (Luke Thompson) should be up next; An Offer From a Gentleman is the third in the series. However, Bridgerton announced that season 3 would instead portray Colin (Luke Newton) and Penelope’s (Nicola Coughlan) love story, relayed in Romancing Mr. Bridgerton, the fourth book in the series. Colin’s book doesn’t just follow Benedict’s; there’s also a sizable time jump between books three and four.

Coughlan announced season 3’s new direction at a Netflix FYC event, noting that she’s been keeping this a secret since season 2 and compared Colin and Penelope to Ross and Rachel from Friends—except that Penelope is the Ross. Soon after, an official announcement from “Lady Whistledown” followed.

It is only fair that in this author’s third year chronicling the marriage mart, Mayfair’s social season should find its focus on a third son…as well as a third daughter.

This author can confirm that the upcoming season shall follow none other than the budding relationship between Mr. Colin Bridgerton and one Miss Penelope Featherington.

With Penelope’s days as a wallflower wearing thin, will she finally take bloom? Time will tell, and as always, so will this author.

It’s a shakeup, for sure, leaving some fans feeling mixed about the move. Some people aren’t thrilled about Benedict having to wait at least another season for the second son to find his happy ending, while others might not be thrilled at seeing Colin take center stage. And although season 2 diverted dramatically from its source material, season 3 has the potential to keep book readers even more on their toes.

(Spoilers for the Bridgerton books ahead!)

In its two seasons to date, Bridgerton planted the seeds of which sibling would be next in line in the previous season’s finale. The season 1 finale didn’t just give us a happy ending for Daphne and Simon (Regé-Jean Page). It also sets us up for an Anthony hellbent on only fulfilling his duty to marry and have kids after his mistress Siena Rosso (Sabrina Bartlett) rejected him.

The season 2 finale follows a similar aim. After Colin shares a dance with Penelope (in which he says she’s special to him), she overhears a conversation between Colin and several other men in the ton who ask Colin if he’s courting Penelope. ​​”Are you mad?” Colin responds. “I would never dream of courting Penelope Featherington.” It’s a scene that leaves Penelope in tears and leads to her leaving her mother’s ball entirely.

The scene has a similar book counterpart. In An Offer From a Gentleman, Penelope overhears a conversation between Anthony, Benedict, and Colin teasing him about possibly marrying Penelope. But instead of running away in tears, Penelope lets them know she heard them and says that she never asked Colin to marry her, leaving all three Bridgertons feeling rather shameful about the conversation.

Romancing Mr. Bridgerton is a take on another famous romance trope—friends-to-lovers—when Colin realizes that Penelope has been there all along and finally gets on the same page as her. But although the show version of Colin doesn’t know that Penelope overheard him dismiss her, chances are he’s going to have to do a lot of groveling to make up for it if she isn’t as easily charmed by him anymore.

Benedict doesn’t have as much setup for his happy ending right now. When we leave him, he plans to leave his art academy after discovering Anthony donated to the academy to get Benedict in, and his romantic entanglements were mostly kept to a single liaison with a fellow artist. Season 3 could give us the queer romance we’ve been wanting Benedict to have for ages, but his love story would fit right into Bridgerton’s M.O. In his book, Benedict first encounters his future wife Sophie at a masquerade ball, but in true Cinderella fashion, she disappears before he can discover who she is. He’s then left wondering about the woman whose name he didn’t learn and pining over her for several years before she reappears in his life.

The Lady Whistledown of it all

Another major plot point of Romancing Mr. Bridgerton is the unveiling of Lady Whistledown herself. The TV audience might’ve known that Penelope “penned” those columns since the end of season 1, but it’s not revealed in the books until we start to get Penelope’s point-of-view. We not only learn how the column came to be but also how she’s been pulling it off for more than a decade. At the start of the latest season, Lady Danbury (Adjoa Andoh) decides to make things interesting by offering £1,000 to whoever can unmask Lady Whistledown.

Colin eventually learns that Penelope is behind London’s most famous columnist and tries to get her to stop, and for a time, Penelope does. But Cressida (Jessica Madsen), who initially claimed that she was Lady Whistledown, uncovers that Penelope is Whistledown and, after Penelope and Colin marry, tries to blackmail her to stay quiet. Instead of paying Cressida off, Colin—with the support of his family behind him—pulls a total Wife Guy move and proclaims that his wife is “the wittiest, cleverest, most enchanting woman in all of London” before revealing to the entire ton that Penelope is Lady Whistledown.

And naturally, Eloise (Claudia Jessie) knowing that her closest friend is behind Whistledown certainly throws a wrench into next season’s columns as well as her impending romance with Eloise’s older brother.

Would it be amusing to see that conclusion unfold? Sure! But unfortunately for the books, once Lady Whistledown is unmasked, Lady Whistledown ceases to exist; she doesn’t appear in the latter half of the series.

If Bridgerton isn’t interested in getting rid of Whistledown—and who would say no to more Dame Julie Andrews reciting Whistledown’s prose for as long as possible—two questions arise: Would Penelope continue writing the column after she and Colin got married, and if she doesn’t, who would take over? And who, out of all of the ton, would be worthy of picking up the pen if Penelope finally lays hers down for good?

The post ‘Bridgerton’ announced the romance at the center of its 3rd season—and we have some questions appeared first on The Daily Dot.