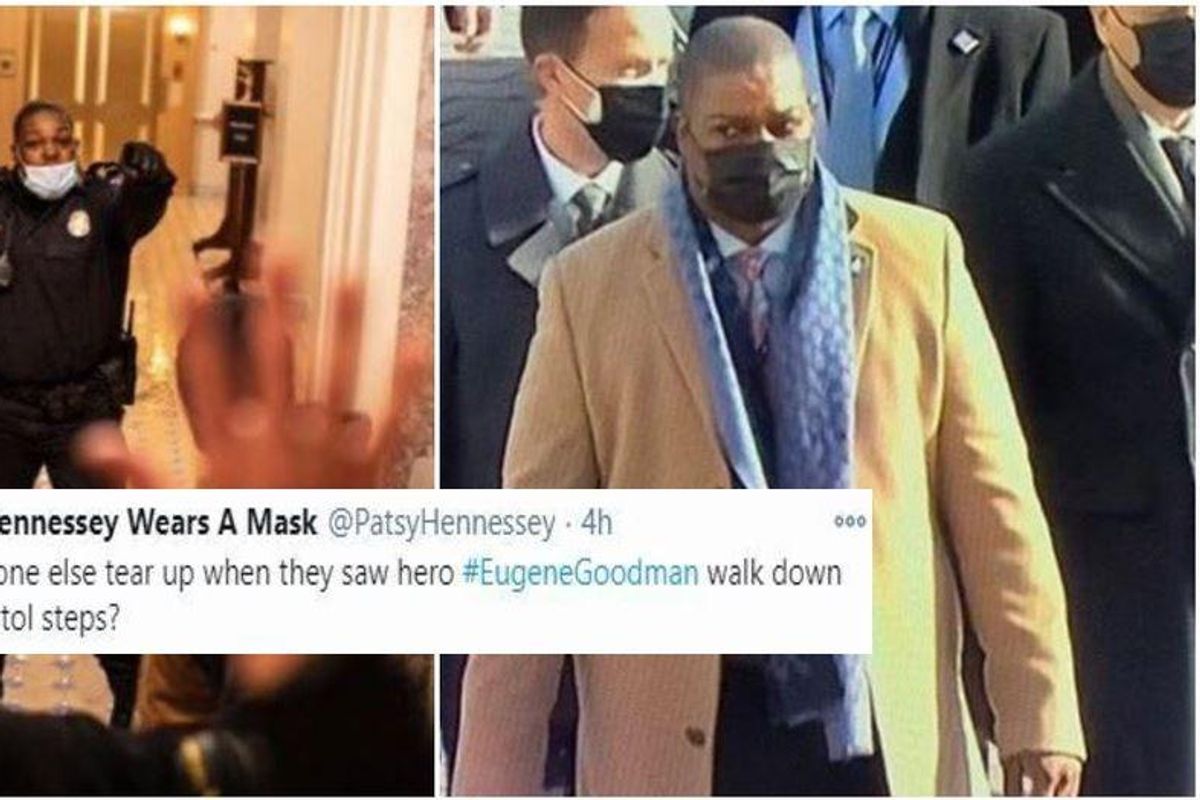 Joe Biden’s inauguration was haunted by the specter of the failed insurrection that occurred just two weeks before at the Capitol building. The Capitol steps may have been adorned with beautiful banners, but it was hard to shake the images of broken windows and rampaging Trump supporters recently burned into the country’s collective subconscious.

The Inauguration wasn’t just the beginning of a new era in American politics, it was a symbol of the resilience of our democracy. One person whose bravery helped preserve the American way of life during the insurrection was honored at the proceedings and his name should never be forgotten: Eugene Goodman.

US Capitol police officer Eugene Goodman single-handedly facing down the mob and diverting them away from Senate ch… https://t.co/FY95YPsHxJ

Goodman found himself alone and confronted with a mob forcing him backwards up a stairway in the Capitol. Goodman attempted to hold back the rioters, but he was clearly outnumbered.

The pivotal moment came when the mob reached the floor of the Senate chambers. Goodman appeared to glance down the hall toward the chambers, where no security can be seen, and then shove the frontman of the mob before leading them in the opposite direction.

Goodman used himself as bait to keep the mob away from the Senate chambers, saving countless lives.

Here’s the scariest part.. as Officer Eugene Goodman ran up the stairs, he glanced to the left and saw the entrance… https://t.co/G8A7Roybxj

“It’s hard to imagine the terror this man must have felt in these moments,” wrote Upworthy’s Anne Reneau. “Completely outnumbered, charged with the duty of protecting the U.S. Capitol as it’s being overrun, knowing that the nation’s lawmakers—including the next three people in line for the presidency—were in the building and relying on the police for protection.”

In the aftermath of the insurrection, Goodman was hailed as a hero. Last week, members of Congress introduced a bill to honor him with the Congressional gold medal for his bravery.

Capitol police officer Eugene Goodman is rightfully being hailed as a hero after singlehandedly holding back rioter… https://t.co/tHNbmK6LVc

He was also promoted to Acting Deputy House Sergeant-at-Arms.

Brother cleans up nice. 😎 Thank you #EugeneGoodman You are the epitome of an American Hero.

Goodman was announced when he arrived at the ceremony and received a standing ovation.

Two weeks ago #EugeneGoodman Goodman went to work like any other day. Today he was announced at the inauguration. #hero

I couldn’t help it, but watching announcement of the entry of Sergeant #EugeneGoodman escorting @VP @KamalaHarris… https://t.co/IjoQyYnSQ4

The presence of such a beloved national hero at the Inauguration made a lot of people emotional.

Did anyone else tear up when they saw hero #EugeneGoodman walk down the Capitol steps? https://t.co/jFXHeyHheB

Two weeks ago, Goodman fended off a group of angry white men who protested the results of the 2020 election. Today, he escorted the first Black woman to take the oath of office as Vice President of the United States.

Two weeks ago #EugeneGoodman led an angry mob of white men away from the Vice President in the Capitol…
Today he… https://t.co/VN4r925KSB

This just about sums it up.