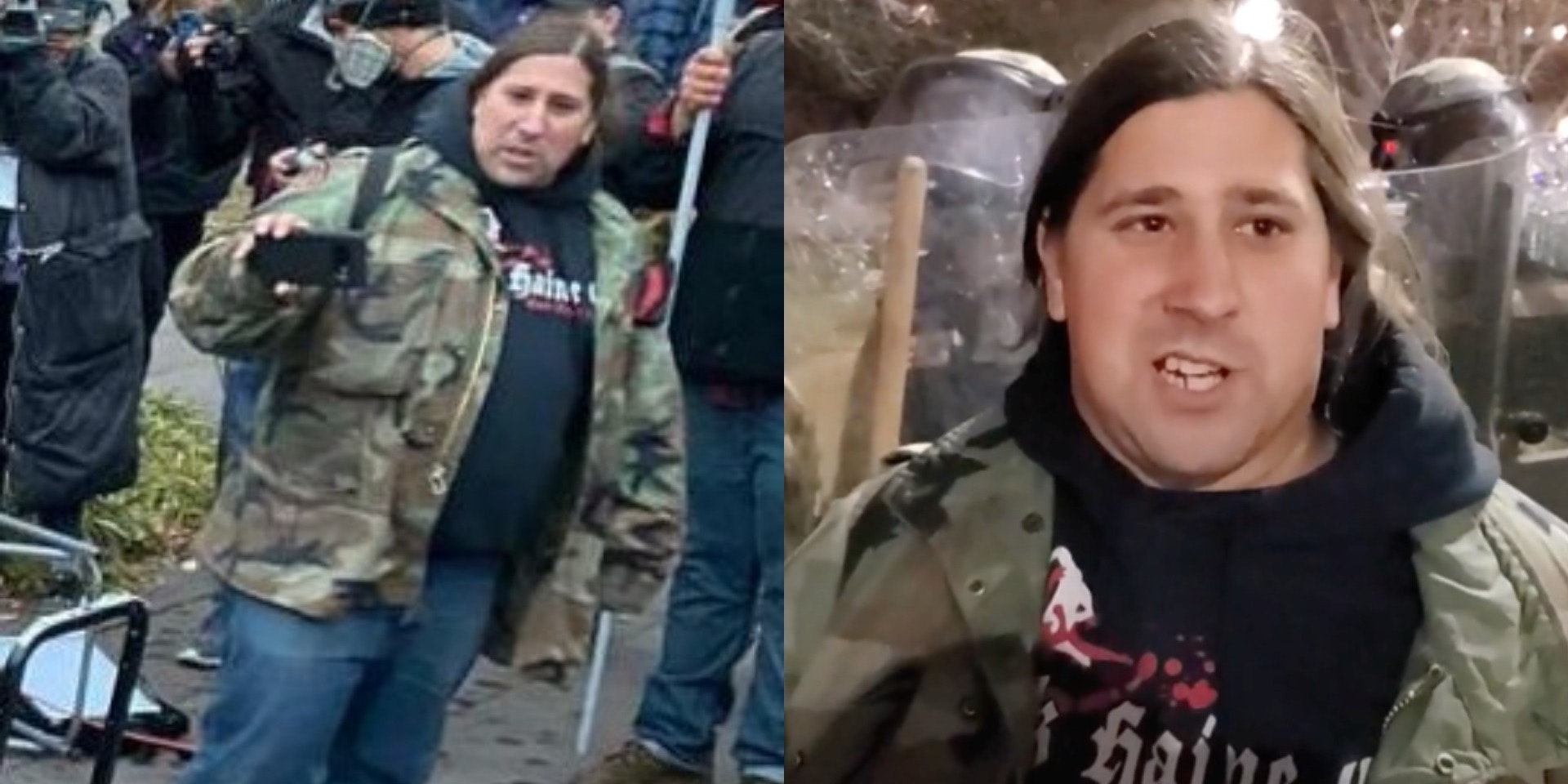 If you were to make a list of things not to do while trying to evade the FBI after participating in the Capitol riot, “filming the riot and uploading the footage to your public YouTube channel” would probably top the list.

But that didn’t stop Gabriel Brown from sharing his public videos from the Capitol insurrection and hyping his YouTube channel to a reporter.

“You didn’t want to do your fucking job. Well, now you can’t,” Brown shouts at reporters.

Brown is currently wanted by the FBI, which on Friday tweeted a photo of him from the riot. Photos of Brown on the FBI’s website are labeled “AOM” for “assault on media.”

Brown has since scrubbed all videos from his YouTube channel, but not before other people saved his Capitol riot footage and uploaded it to YouTube independently.

Yesterday, actor and comedian Walter Masterson also uploaded several TikTok videos in which he interviewed Brown. At the time, Brown made no bones about his involvement in the Capitol riot and directed listeners to his YouTube channel.

When asked what happened at Capitol Hill, Brown told Masterson, “I thought it was a Woodstock concert. There were so many people outside. Were there some, like, crazy characters there? Sure, and some of them went a little over the top.”

“I actually filmed all my journey up there. It’s on my YouTube channel,” Brown continued. He then told Masterson his own name and the name of his channel: “GB0083,” the first two letters standing for “Gabriel Brown.”

In a follow-up video, Brown expressed his disdain for Rep. Alexandria Ocasio-Cortez (D-N.Y.).

“I’m not a fan of her,” Brown said. “‘Cause when the whole thing with Ted Cruz happened, Ted Cruz was like, ‘Yeah, I’m willing to work with you, let’s go after these people.’ And she’s like, ‘No, anyone but you. We’re not working together. You tried to kill me.’”

“So she wouldn’t work with him because she’s like, ‘You tried to have me killed a few weeks ago?’” Masterson asked incredulously.

“Exactly. And you know what? I was there in D.C. I wasn’t trying to kill her,” Brown responded.

In a third video on Masterson’s TikTok account, Brown claimed that antifa has been “targeting” him since 2013 and described himself as “one of the most hated people in New York.”

Brown previously filmed the 2017 Unite the Right rally in Charlottesville, Virginia, where white supremacists and far-right leaders gathered to violently oppose the removal of a statue of Confederate General Robert E. Lee.

According to Vice, Brown has been regularly seen at events with Proud Boys, though he has never been spotted wearing their uniform, a black and yellow Fred Perry polo shirt.

On his YouTube “About” page, Brown describes himself as an “Independent Journalist, Activist, Content Creator, Controversial Individual, Political Wild Card.” He says he is interested in a “fusion between elements of American Nationalism (Cultural), Anarchism (Pan-Anarchism), Libertarianism (Pan-Libertarianism), Classical Liberalism, Individualism and voluntaryism.”

At the time of this writing, Brown has not been listed on the Department of Justice’s list of defendants charged in the Capitol riot.

The post Capitol rioter wanted by FBI bragged about uploading footage to his YouTube channel appeared first on The Daily Dot.