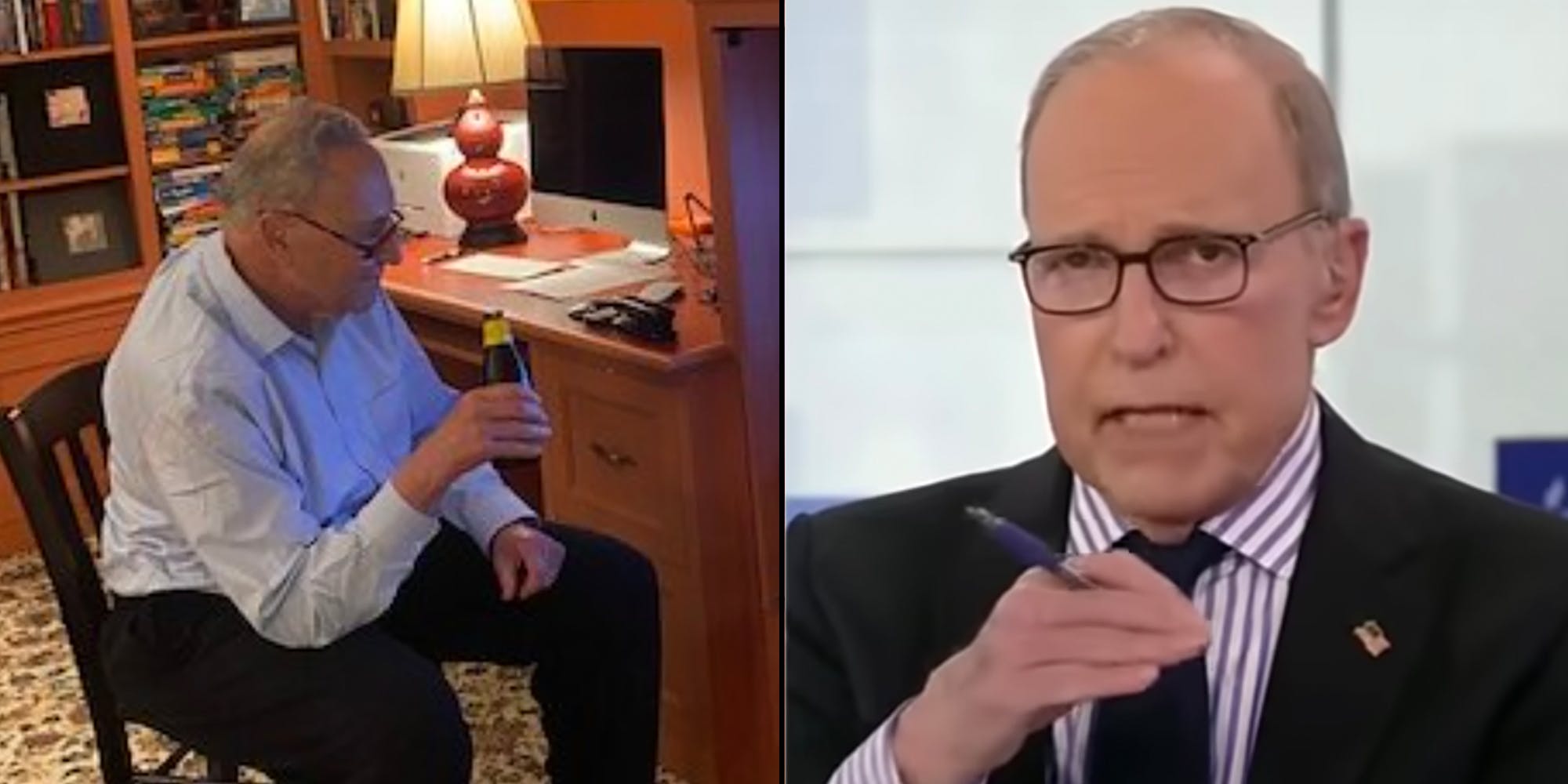 Sen. Charles Schumer (D-N.Y.) had one of the most seemingly bizarre tweets by those watching Sunday night’s Oscars, telling Americans that he was “excited to be watching the Oscars with an ice-cold plant-based beer.”

But the tweet, complete with a staged photo and a “Thanks Joe Biden” signoff, was actually a dig at former President Donald Trump economic adviser Larry Kudlow, who made the “plant-based beer” phrase part of his Fox Business appearance on Friday.

Kudlow was railing against the Green New Deal on his Fox Business show. Kudlow contends that the proposed legislation, designed to fight climate change, will require Americans to stop eating meat.

The specific rant about a forever-marred July 4 celebration comes at the 0:55 mark of this clip from Friday’s show.

“There’s a study coming out of the University of Michigan which says that to meet the Biden Green New Deal targets,” Kudlow said, “America has to, get this, America has to stop eating meat, stop eating poultry and fish, seafood, eggs, dairy, and animal-based fats. Ok, got that? No burger on July 4. No steaks on the barbecue. I’m sure Middle America is just going to love that. Can you grill those Brussels sprouts?”

“So get ready,” he continued. “You can throw back a plant-based beer,” he said, making an odd hand gesture meant to mime holding and drinking a beer, “with your grilled Brussels sprouts and wave your American flag. Call it July 4th Green.”

“Now, I’m making fun of this because I intend to make fun of it,” he continued. “This kind of thing is stupid. It comes from a bunch of ideological zealots who don’t care one whit about America’s well-being. Not one whit.”

As fact-checker extraordinaire Daniel Dale pointed out, the University of Michigan study looked more generally at meat consumption and production and their effects on climate change; the Daily Mail ran with those projections and they ended up as the foundation for Kudlow’s “July 4th Green” nightmare.

A Washington Post article, which debunked Kudlow’s allegations, notes that other right-wing attention seekers are jumping in on the narrative, with Rep. Lauren Boebert (R-Colo.) admonishing the president to “stay out of my kitchen,” and with Rep. Marjorie Taylor Greene (R-Ga.) dubbing Biden “The Hamburglar.”

The latter tweet led to a quick photoshop putting Biden into the costume of the McDonaldland character the firebrand congresswoman was referencing.

Other Trump fans shared pictures of steaks from the past weekend to show just how uninterested they were in even feigning self-sacrifice.

But for those who didn’t happen upon this political theater and just wanted to watch the Oscars, Schumer’s tweet clanged strangely in the timeline.

Liz Mair, also puzzled, asked, “Is this a weird way of saying that he’s not drinking mead?”

But reactions to Kudlow’s statements started up on Twitter shortly after he made them, with one tweeter sputtering, “What… what does Larry Kudlow think beer is made from exactly?”

As of now, no matter what Kudlow says, beer is still made with hops, barley, malt, and water. No meat in sight.

The post Chuck Schumer’s odd ‘plant-based beer’ tweet was actually his attempt at making a sick dunk appeared first on The Daily Dot.