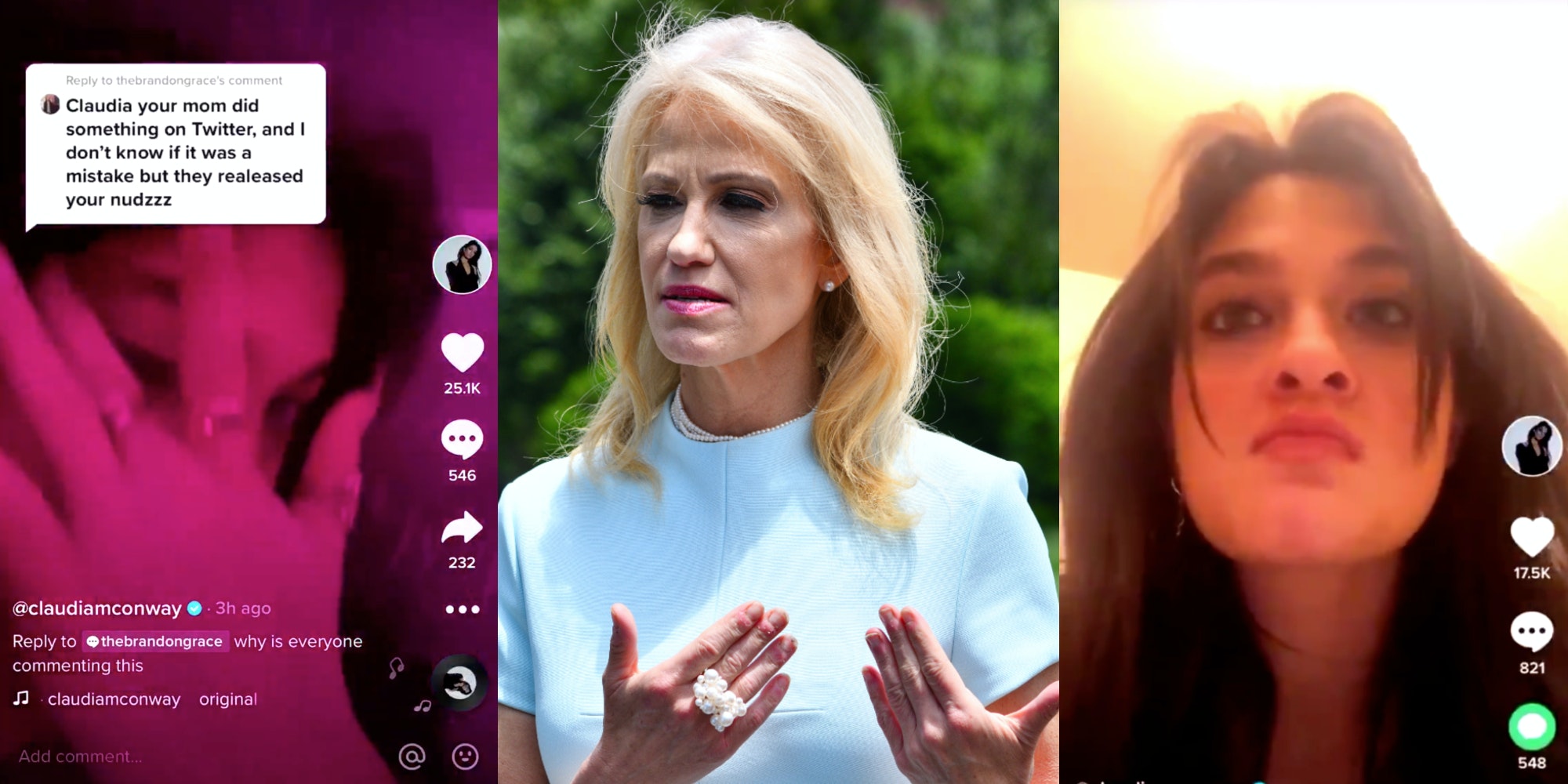 Claudia and Kellyanne Conway have been publicly feuding for a while now, but the escalating family drama reached new heights yesterday after the elder Conway allegedly shared a nude photo of her 16-year-old daughter on Twitter.

Kellyanne reportedly shared the nude using Twitter’s Fleet feature, which is similar to Instagram’s Stories. The Fleet in question has since been deleted, but not before numerous people brought it to Claudia’s attention and archived it.

As the drama continues to unfold online, people are reacting with shock and horror at the notion that a mother would so publicly violate her child.

In the comments of Claudia’s videos, several users commented that her mother had shared her nude photo. Last night, Claudia uploaded new videos in which she confusedly questioned the legitimacy of their claims.

“I don’t know if this is a joke or not, but like, I’m really scared,” Claudia said in her first TikTok from last night. In the second, she merely asked her followers if the claims were real.

In a third, since-deleted TikTok, Claudia confirmed that her mother did, in fact, leak her nude photo.

In Claudia’s third TikTok, which users saved before it was deleted, the 16-year-old explained to the best of her understanding how the nude arrived on her mother’s Twitter. She explained that Kellyanne likely came across the photo on Claudia’s phone during one of the many times she confiscated the device. She then snapped a photo of the nude to her own phone.

As for how the photo ended up on social media, Claudia gave her mother the benefit of the doubt, saying, “I guess she accidentally posted it? Or somebody hacked her.”

Claudia requested that viewers report the photo, and her mother, to Twitter. She said there is no reason anyone else would have the photo and concluded, “Kellyanne, you’re going to fucking jail.”

After Claudia posted her TikToks, the rest of the Conways caught wind of the unfolding drama. More of the fallout was captured in screen-recorded FaceTime conversation between Claudia and YouTuber Tana Mongeau, who recently came out in support of Claudia online.

According to Mongeau’s nearly 20-minute Instagram video, Kellyanne called the police on her daughter. (Mongeau added that Claudia gave her permission to post the footage online.)

Kellyanne can be heard in the background of the video claiming that she “does not feel safe,” despite being the adult in the situation. According to Mongeau, both Conway parents described their daughter as “mentally ill,” “a cunt,” and “a disgrace to their family” over the course of a single phone call.

During the recorded call, Kellyanne repeatedly denied posting the nude to her Twitter. Despite this, Mongeau alleged that Claudia has a video of Kellyanne “basically admitting that it happened.”

Despite the evidence that suggests Claudia is telling the truth, Mongeau says the Conways attempted to send their daughter to a psychiatric ward.

Much of the audio shared by Mongeau is difficult to make out. It is distorted and frequently interrupted by Mongeau’s own commentary. Kellyanne and a male—presumably Claudia’s father, George—both lecture and deride Claudia. At several points, Kellyanne says no one “intentionally” posted the nude, suggesting that it was, in fact, an accident.

The Conway parents and the police lean heavily on the notion that Claudia has an “addiction” to her phone. People online blasted this idea, dragging Kellyanne for acting as if an addiction to TikTok—already a shaky claim—is somehow worse than a parent sharing a child’s nude with their more than 3 million followers.

User @amelian_dollars asked the question on most viewers’ minds: “why do they seem UNBOTHERED that SHE POSTED A NUDE PHOTO OF A CHILD.”

On Twitter, people are sharing their own horrified reactions to the news, causing #JusticeForClaudiaConway to trend.

Many people called for action to be taken against the police officer who can be seen ending Claudia’s FaceTime with Mongeau. Many people saw it as an active removal of Claudia’s only safety net.

“This is the officer who wouldn’t help Claudia,” Twitter user @MsJenSteele wrote. “If you know who he is or how to clean up this picture be my guest.” @MsJenSteele also shared the number for the New Jersey Department of Children and Families.

Claudia, for her part, has been asking for help via TikTok comments. Over the course of several comments, she came to the realization that the nude photo claims were true, and she eventually began using Morse code to ask for help.

According to Twitter user @urnotcharming’s translation, some of Claudia’s Morse code messages translated to “please get people to talk about this” and “I’m okay but I’m scared af spread awareness please.”

In a series of TikToks uploaded late this morning, Claudia announced she was taking a break from social media to work on her relationship with her mother and asked people to “stop sending hate” to her family.

“I don’t want any drama. I don’t want any hate. So I will be leaving social media for a bit to work on my relationship with my mom and my family,” she continued. “Please do not incite hate or violence on my family. Please, no threats, no calls to authorities. I love my mom and she loves me.”

The Daily Dot has reached out to both Claudia and Kellyanne Conway.

The post Claudia Conway accuses mother of sharing nude photo of her on Twitter appeared first on The Daily Dot.

The best Conor McGregor memes from his UFC match
Has Tom Brady had work done? Plastic surgery Twitter sure thinks so
Advertisement