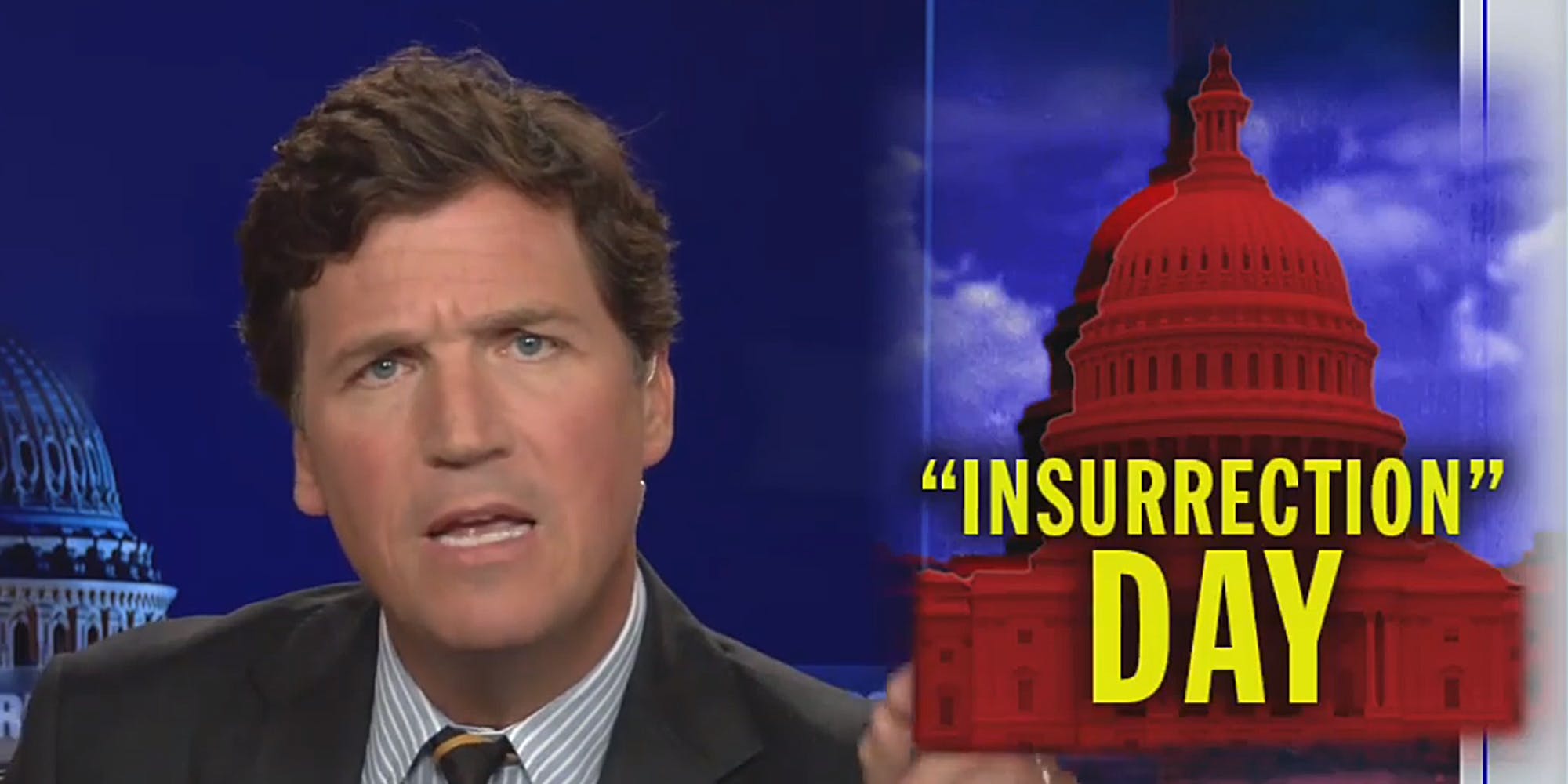 Prominent conservatives have begun to spread the baseless claim that the Jan 6. insurrection in Washington, D.C., was “orchestrated” and carried out by the Federal Bureau of Investigation (FBI).

The unsubstasiated allegation arose on Monday after the right-wing outlet Revolver News published an article merely asking whether it was possible that FBI informants had been among the rioters at the Capitol.

The article repeatedly notes that no such evidence exists for the claim and instead raises the question based merely on the FBI’s decades-long history of infiltrating so-called “patriot groups.”

But the article is already being cited by supporters of former President Donald Trump, eager to pass off blame for the violence at the Capitol, as exonerating proof that the day’s events were organized by the federal government.

While speaking with one of the article’s authors on Tuesday evening, Fox News host Tucker Carlson continually framed the Revolver News piece as proven while citing unnamed “government documents.”

“They were almost certainly working for the FBI, so FBI operatives were organizing the attack at the Capitol on January 6, according to government documents,” Carlson said.

Although Carlson’s guest, Darren J. Beattie, only states that the existence of FBI informants is a “possibility,” Carlson continues to claim otherwise.

“It turns out that this ‘white supremacist insurrection’ was — again, by the government’s own admission in these documents — organized by government agents,” Carlson said.

Conservatives are already using the interview to push the new conspiracy theory forward.

Rep. Matt Gaetz (R-Fla.), who is currently being investigated over allegations of sex trafficking, outright asserted that FBI operatives “organized and participated in the January 6th Capitol riot.”

Rep. Marjorie Taylor Greene (R-Ga.), who recently apologized for comparing having to wear face coverings amid the coronavirus pandemic to the Holocaust, also began spreading the unproven claim.

“We need names and answers about the FBI operatives, who were involved in organizing and carrying out the Jan 6th Capitol riot,” Greene tweeted. “First they had a ‘back up plan’ to stop Trump in Russia Collusion witch hunt, now we are finding out they were deeply involved in Jan 6th. Deep State.”

Just hours after the interview, Gaetz on Wednesday morning announced that he had written a letter to FBI Director Christopher Wray demanding answers.

Given previous FBI operations involving the infiltration of right-wing groups, it is not at all out of the realm of possibility that informants were in the crowd on Jan. 6. Even Proud Boys national chairman Enrique Tarrio was recently learned to have been a federal informant following a 2012 arrest.

Yet the mere possibility that informants may have been present, which has not been proven for Jan. 6, is a far leap from the claims that the FBI both planned and executed the entire insurrection.

Undoubtedly, there are serious questions regarding law enforcement foreknowledge and preparedness regarding Jan. 6. But the campaign to accuse the FBI is not rooted in a legitimate concern among conservatives to learn why the events at the Capitol unfolded. The allegations are instead part of a months-long effort to shift the blame from Trump supporters—radicalized by the former president and election fraud conspiracy theories—to everything from “antifa” to the federal government.

The post Conservative conspiracy theorists no longer blaming antifa for Capitol riot—they now think the FBI carried it out appeared first on The Daily Dot.

Biden just smiled at Putin. Conservatives are melting down
‘The one true life hack’: TikTok hack for buttering popcorn blows up—but not everyone’s a fan
Advertisement