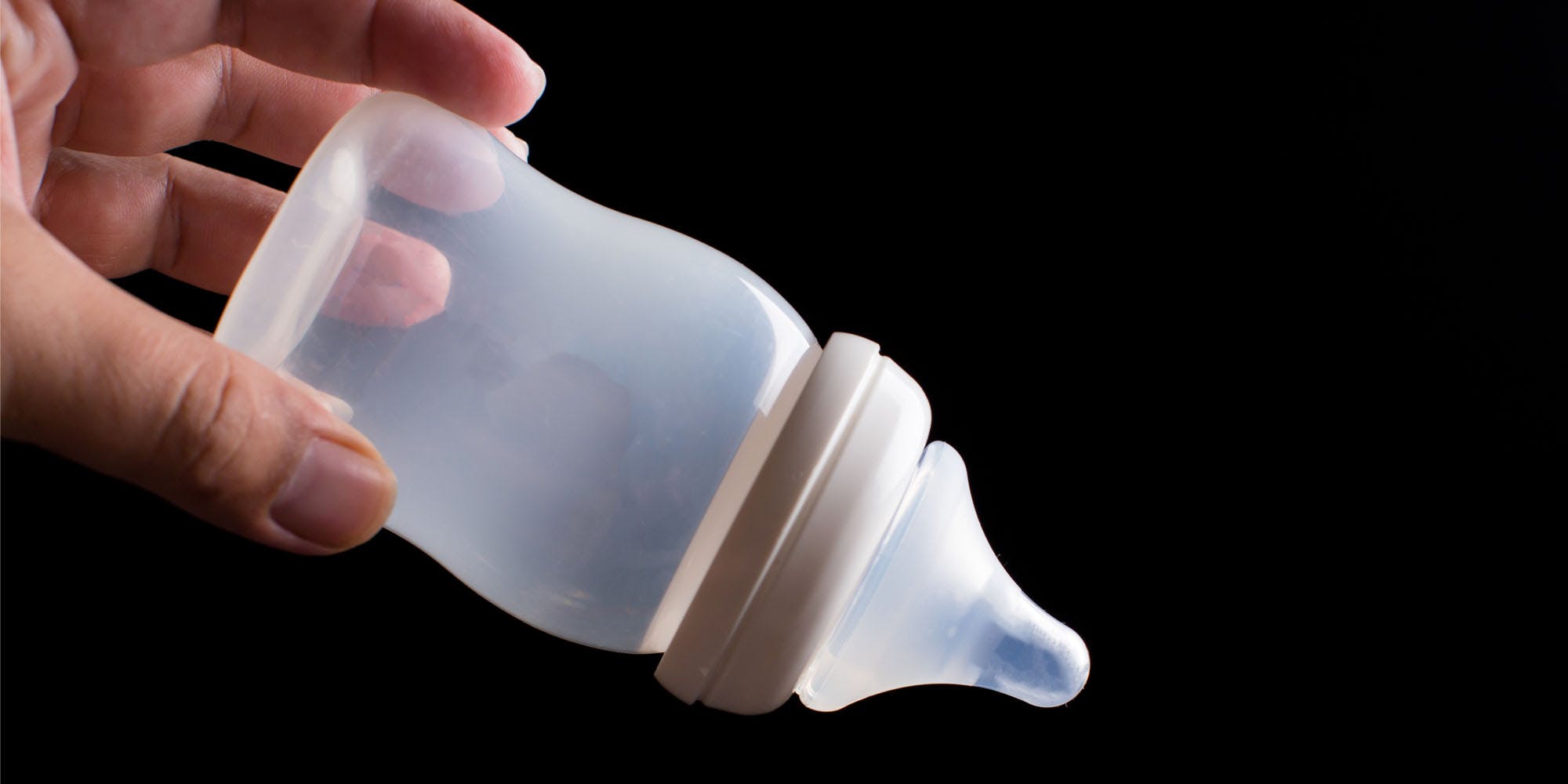 The United States is currently in the grip of a severe shortage of baby formula, a very real and very serious problem, with stocks of formula down 40% in some states. As a result, stores across the country are struggling to get formula on their shelves or setting limits on how much can be bought at one time. Parents are sharing their fear and anguish about their basic ability to feed their babies. Some are even looking to get around the problem by making their own—which doctors strongly recommend against, and could cause serious harm.

As has become customary online, conspiracy theories rushed in to fill the gaps between what’s actually happening and people’s worst fears about why. Conspiratorial social media users on both the left and the right jumped in to theorize all kinds of links to other current events, stoking fear in parents who are already genuinely afraid and looking for someone to blame for what’s going on.

As most conspiracy theories do, this one offers numerous different potential culprits, without providing evidence for the claims. But with numerous people looking for someone to blame, there isn’t much difficulty in directing people’s ire at any sort of inaccurate boogeyman.

In reality, the shortage is being caused by a number of factors, some of which are the same transportation and staffing issues plaguing a number of industries. By far, the biggest culprit was a February recall by Abbott Nutrition, the largest single manufacturer of formula, after two babies died due to possible bacterial contamination of product made at their plant in Sturgis, Michigan. The plant was temporarily shut down for extensive repairs and inspection, which will likely save lives in the long run. In the short term, it’s contributing to a massive problem and forcing parents to go to heroic lengths just to feed their babies.

For their efforts, the company is being lumped in with other current political demons, branded as baby killers and proponents of forced breeding, all for attempting to do the safe thing.

Left-leaning social media accounts declared that the shortage was linked to the recent leak of the draft ruling by the Supreme Court overturning Roe v. Wade. In particular, a number of accounts focused on a line in the draft, where Justice Samuel Alito wrote about the need to have a “domestic supply of infants relinquished at birth” in order to ensure Americans could adopt American-born babies. Is the formula shortage being engineered to provide said “domestic supply of infants,” with mothers who can’t feed their kids forced to put them up for adoption?

A closer analysis of the quote from the leaked draft reveals that the “domestic supply of infants” line wasn’t written by Alito, but is a footnote linking to a Centers for Disease Control report that ran down various arguments for and against abortion. The entire quote reads: “[N]early 1 million women were seeking to adopt children in 2002 (i.e., they were in demand of a child), whereas the domestic supply of infants relinquished at birth or within the first month of life and available to be adopted had become virtually nonexistent.”

The study is quoted as an argument for adoption, with Alito writing that “states have increasingly adopted safe haven laws, which generally allow women to drop off babies anonymously; and that a woman who puts her newborn up for adoption today has little reason to fear that the baby will not find a suitable home.”

The note references the fact that the vast majority of American-born babies put up for adoption will find new homes, and that fears of overcrowded orphanages or foster homes are not a reason for abortion to be available on demand.

The phrase in the leaked ruling has nothing to do with baby formula, given that the draft opinion was written in February, and the formula shortage has only become an acute event in the last few weeks. The two events have no link to each other. Yet it’s still been easy to stoke fears around it.

But it’s not just pro-choice advocates conspiracy theorizing about the formula shortage. The far-right is handling it the same way they’ve handled inflation, escalating gas prices, and almost everything else that’s happened in the last year-plus: they’ve blamed Joe Biden and Democratic support for Ukraine, instead of putting “America first.”

Specifically, they’re attacking Biden for advocating for another $40 billion going to the defense of Ukraine rather than using that money to somehow end the shortage—even though there are multiple factors going onto the shortage that have nothing to do with Biden, Ukraine, or a lack of funds. Regardless, it’s all proof that Biden “doesn’t care about our kids” as one Fox News op-ed put it.

Biden is monstrously doing nothing to “help families” while sending vast amounts of money to his cronies in Ukraine, where his son has spent years cashing in, and where his administration has creepy biolabs that create pandemics and help get Democrats elected.

It’s a demonic scenario being painted, leftist abortion-lovers like Biden punishing Americans who dare to defy their bloodlust for baby killing.

Some have gone even further, claiming that the shortage is part of various plots to hurt children through forced starvation, to force women out of the workforce by taking formula away and forcing them to breastfeed, to pass on vaccine antibodies through breastfeeding, or is linked to Bill Gates investing in a company called Biomilq that’s working on artificial breast milk (Gates did invest $3.5 million in the company through his climate-change focused investment firm).

The baby formula shortage is very real, and a serious problem for parents who depend on it. But the reasons for it are complex and deeply interconnected and have been growing quietly for several years. The COVID-19 pandemic caused delays to the normal 3-4 month cycle of formula production, with short-staffed companies struggling to keep output up. Other plants couldn’t get critical formula ingredients because of transportation snarls and supply chain issues and problems were exacerbated by a series of winter storms on the East Coast.

Even the Abbott recall, which was carried out voluntarily by the company, was rolled into conspiracy theories, as news broke that a whistleblower had notified the FDA of plant issues, only for it to take months for the agency to inspect the plant. Is this incompetence by the FDA, the company covering its own backside, or something even worse—a purposeful slowdown by the Biden administration?

It’s not clear why it’s taking so long for the FDA to approve the Abbott plant restarting, though the company said it could re-open the Sturgis plant by the end of May and get formula on shelves a few months later. It’s not helping that Congress and the White House seemed befuddled by the existence of the problem and were barely talking about it until last week, though the Biden administration announced on May 12 that they would be taking additional steps and talking to other manufacturers to help mitigate the crisis.

But while the problem is severe, it’s not something that would suddenly vanish because the government redirected money from Ukraine to baby formula makers. Enough formula isn’t being made, and what is being made is getting tangled up in the same transportation issues that are causing delays in other industries. It’s also being bought up and resold by profiteers for many times its original price. There’s ultimately little Biden or Congress can do about the problem immediately, given that there’s no strategic reserve of baby formula in the US.

The real victims of the formula shortage are parents struggling to feed their kids, and babies who depend on high-quality formula. And they are absolutely not being aided by conspiracy theorists trying to prey on their fears by pushing disturbing agendas which have little basis in reality.

‘I’d change the locks’: Mom ‘surprises’ adult son while he has girl over, hops into bed with them
A mother on TikTok is bringing attention to the danger of amber teething necklaces after one killed her son
Advertisement