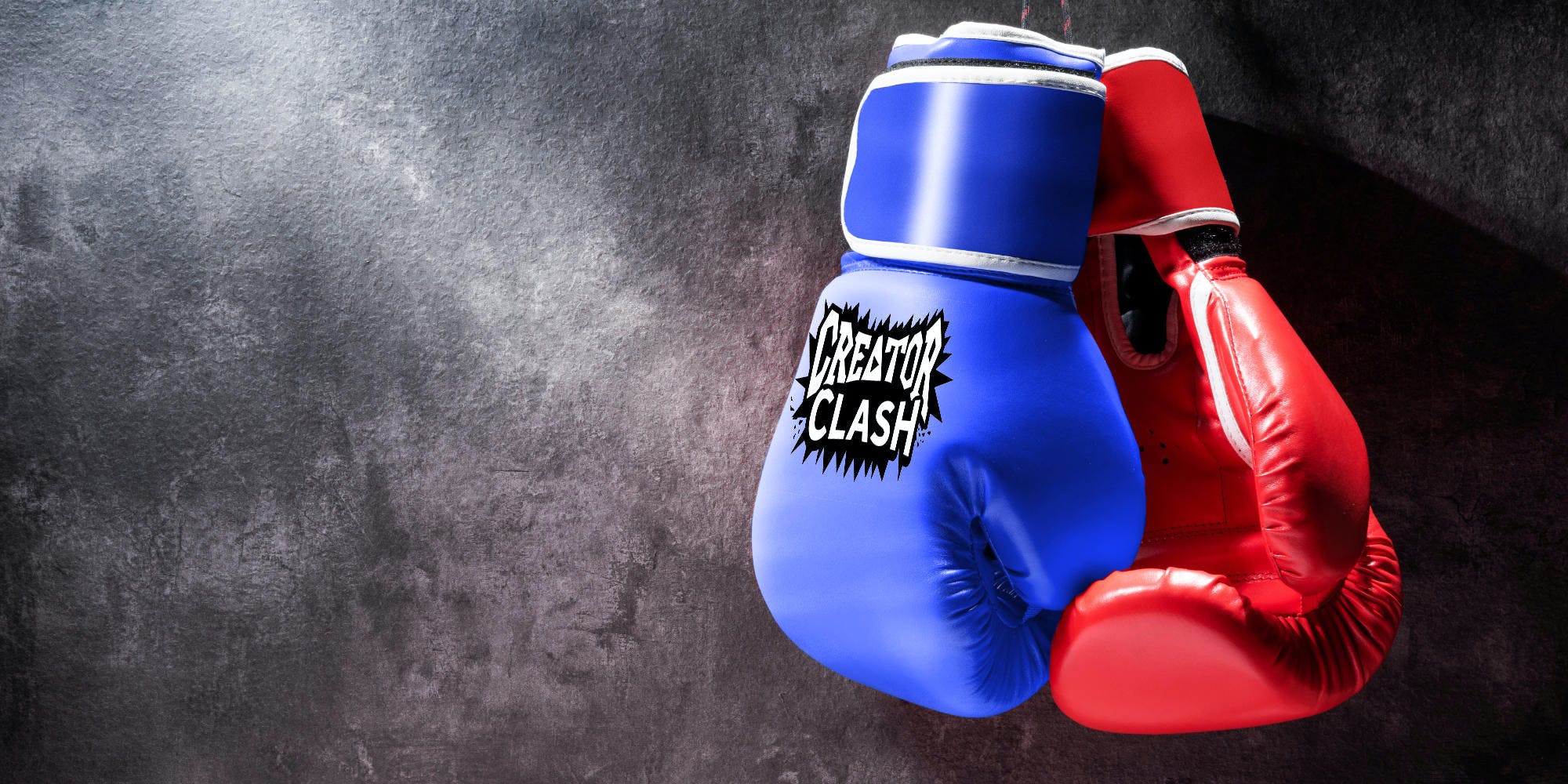 The Yuengling Center in Tampa, Florida was host to one of the most eclectic and thrilling fighting performances to ever spawn out of the denizens of social media. Creator Clash, a three-hour event with nine fights, took some of the oddest gamers, builders, musicians and variety channels on YouTube and Twitch and had them punch each other for audience amusement.

The formula for influencer boxing events has remained fairly unchanged since Logan Paul and KSI first brought each other to the ring in August 2018. There’s usually a display of manufactured drama, weird musical numbers, and someone promoting a cryptocurrency. Over the past few years, both Paul and his brother Jake have grown their boxing careers, culminating in Logan facing off against the undefeated Floyd Mayweather and Jake fighting UFC champion Tyron Woodley.

The Paul brothers’ fights have been seen by millions of people, appearing in some of the most premiere pummeling events. Jake’s latest fight was broadcast on Showtime and Logan made a guest appearance at Wrestlemania 38.

Not all of these boxing events have been successful though. Austin McBroom, star of the family vlogging Ace Family, spearheaded a “YouTubers vs. TikTokers” boxing match in 2021 that ended up underperforming. Some fighters claimed they were never paid and multiple production companies filed lawsuits against each other (both lawsuits were settled, with LiveOne agreeing to pay McBroom $3 million).

Creator Clash wasn’t designed to be another clout-chasing event. Ian Washburn, known online as iDubbbz, previously criticized typical influencer boxing events for being “money-driven.” He initially formulated the event to fight YouTuber, Bryan “RiceGum” Le for charity. After Le declined the offer, Washburn decided to run with the charitable aspect and create an entire YouTube boxing event with newbies. All of the fighters brought a mystery component to the ring, with viewers wondering if any of them could actually fight.

“I’ve always had a medium interest in YouTuber boxing, I’m not crazy about the people that have been involved so far,” Washburn said in an April video introducing the Creator Clash. “I wanted a new niche to be covered.”

All of the fighters had professional fighting coaches and months to prepare in order to avoid subpar spectacles. It was a group of friendly content creators, who weren’t creating fake beef to sell tickets, punching each other—with all proceeds going to the American Heart Association and other charities. By the end, viewers knew exactly who could (or couldn’t) take a punch.

Some fights that night were far different from a Paul brawl, appearing more like one-sided slap fests. Matt Watson, half of the YouTube gaming channel, SuperMega, squared off against Nathan Barnatt, better known as Dad, in the first bout. The fight lasted only 22 seconds, with Dad landing a TKO in the first round. Meanwhile, I Did A Thing’s Alex Apollonov beat Robert James Rallison of TheOdd1sOut in a match that also lasted a single round.

Other matches had more action, like Internet Comment Etiquette’s Erik Hoffstad losing to DJ Welch, which showed how tough two large dudes can punch. One of the weirdest pairings, maker Michael Reeves and financial guru Graham Stephens, was also fun to watch, with Reeves squeaking out ahead.

Fans were also out in force, cheering on their favorite creators in the heat of battle. H3 podcast producer AB Ayad had the crowd roaring after he lost to Brett “Hundar” Hundley, a gaming YouTuber. When Harley Morenstein, host of Epic Meal Time, beat Arin Hanson, host of the web series Game Grumps, you could hear the crowd chant “kiss” over and over.

A few of the matches were truly mesmerizing, showing how skilled the creators were in the ring. Watson’s co-host Ryan Magee, faced off against member of the Vlog Squad’s Alex Ernst in a bloody five round match that had Watson’s nose showing a fair amount of damage. And in the first female influencer boxing match at any of these events, Twitch streamer Minx barely secured a win against TikToker Yodeling Haley in a fifth-round total knockout.

The final and main event of the evening had Washburn up against Dr. Mike Varshavski, a YouTuber known for his charming good looks and medical takes. In a sweaty five-round match that had both fighters reeling in agony, Dr. Mike managed to take the win in a judge’s decision.

Creator Clash may have still been a bunch of influencer’s fighting for the adoration of fans, but it moved the goalpost of what these events can be. You don’t need the shameless drama, traditional celebrities, or even major skills to make an event successful. You can take a bunch of random, unconventional names and bring in their massive audiences who will support them—and their charities—in whatever circumstance.

Though we may still see the Paul brothers showboat on Showtime, it appears we’ll also be seeing more of these unconventional boxing events, as the second Creator Clash is already in the works.

The post Creator Clash takes the cash-grabbing and clout-chasing out of influencer boxing appeared first on The Daily Dot.