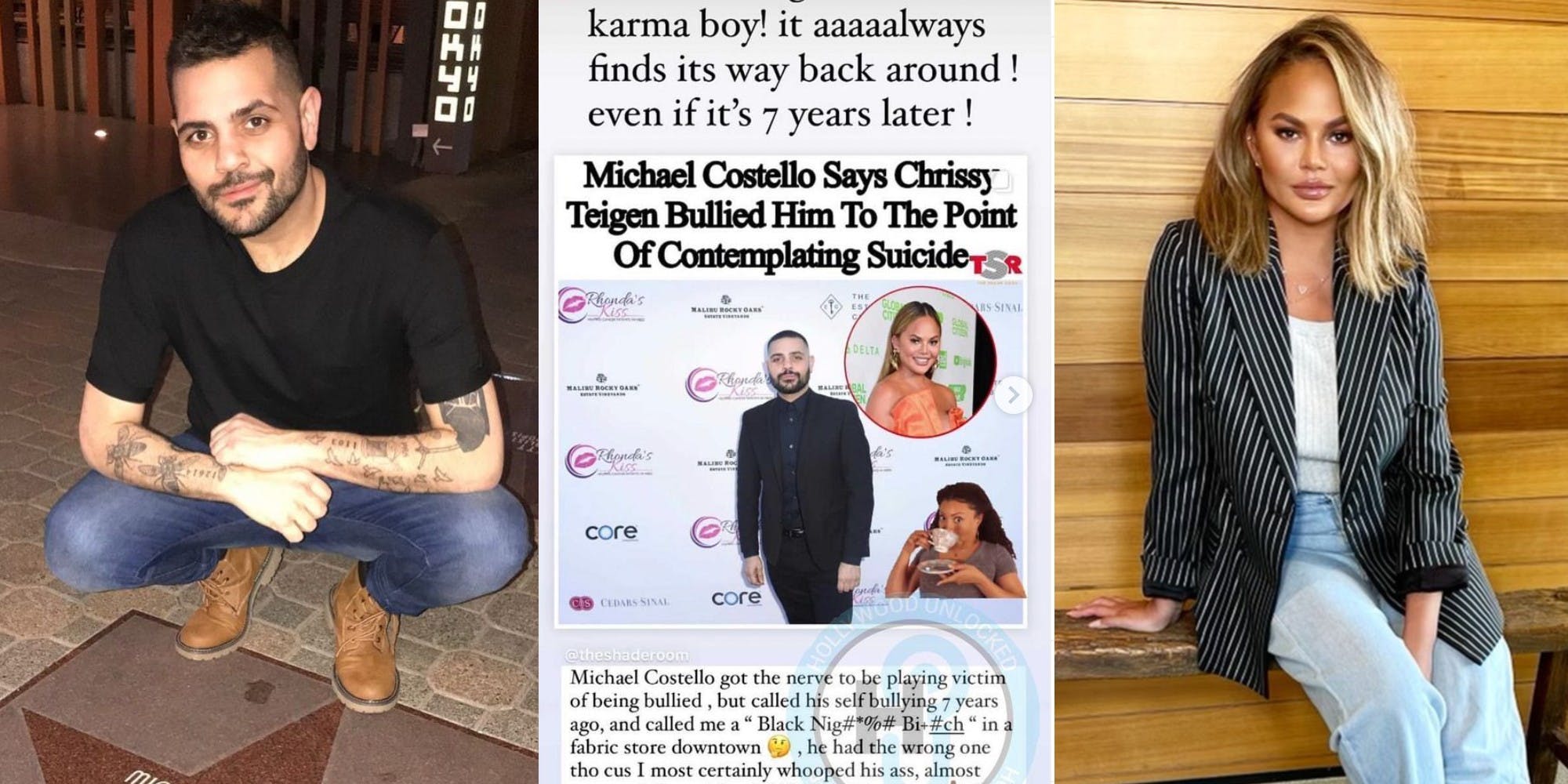 In an Instagram post on Monday, fashion designer Michael Costello said he’s lived with “a deep unhealed trauma” for the past seven years because of a public remark from Chrissy Teigen regarding a “photoshopped comment.” However, some people online claim that’s not the full story.

Costello said he wanted to kill himself and is still traumatized, depressed, and having thoughts of suicide because of Teigen’s old comment on his Instagram.

Costello’s accusation came the same day Teigen penned a public apology to model and media personality Courtney Stodden for trolling them on social media when they were a teenager. In a now-deleted comment from 2014 captured by HipHollywood.com, Teigen accused Costello of being racist.

In his post, Costello said he reached out to Teigen to clear up the situation, but she appears to have told him his career was over. The post also included what looks to be screenshots of Costello messaging Teigen via Instagram to try to speak with her.

Teigen replied in the alleged screenshot, “Racist people like you deserve to suffer and die. You might as well be dead.”

During the next few years, he allegedly was pulled off various jobs at the last minute, which Costello said was thanks to Teigen and fashion stylist Monica Rose.

“Not only was I the victim of cyber defamation, I was also getting [blacklisted] in real life,” he wrote.

Costello said Teigen formed her opinion based on what he calls a “photoshopped comment floating around the internet.” He claims it was proven false and that Instagram has since taken it down, but some people aren’t so sure.

“I’m not seeing where the n-word messages were photoshopped, just Michael saying that they were. Was that proven?” one person tweeted.

“I shouldn’t be, but I’m really surprised by the lack of literally any investigation into this Michael Costello story,” user @ANLWrites_OLD wrote, starting a thread about Costello’s alleged history of racism.

Additionally, in an Instagram Story posted by fashion designer Maxine James and captured by the account @hollywoodunlocked, James claims that Costello also called her the N-word during an in-person encounter.

Despite the uncertainty surrounding Costello’s own behavior, Twitter users criticized Teigen for her alleged cruel DMs.

Others want to know what was going on for her to allegedly bully multiple people into suicidal depression.

Following Costello’s post, singer Leona Lewis also spoke out on Instagram about a negative experience she had with him, saying “the pot calling the kettle black in this situation doesn’t sit right with me.” She claims he humiliated her at a 2014 charity fashion show event and left her with body insecurities.

Nevertheless, she said “everyone makes mistakes.”

“I feel that when people apologize (Chrissy) and show sincere remorse & rehabilitation for their actions, we should embrace them & not try and kick them when they’re down,” Lewis said in her post.

The Daily Dot reached out to representatives for Teigen, Costello, James, and Lewis.

The post Designer Michael Costello accuses Chrissy Teigen of bullying—while others accuse him of hypocrisy appeared first on The Daily Dot.

‘I would go to jail if my BF cheated on me with a damn Karen’: Jeweler shares custom necklace order for client’s cheating boyfriend on TikTok
‘This is CAP’: TikToker claims her 10-month-old spent $10,000 on Tesla upgrade
Advertisement