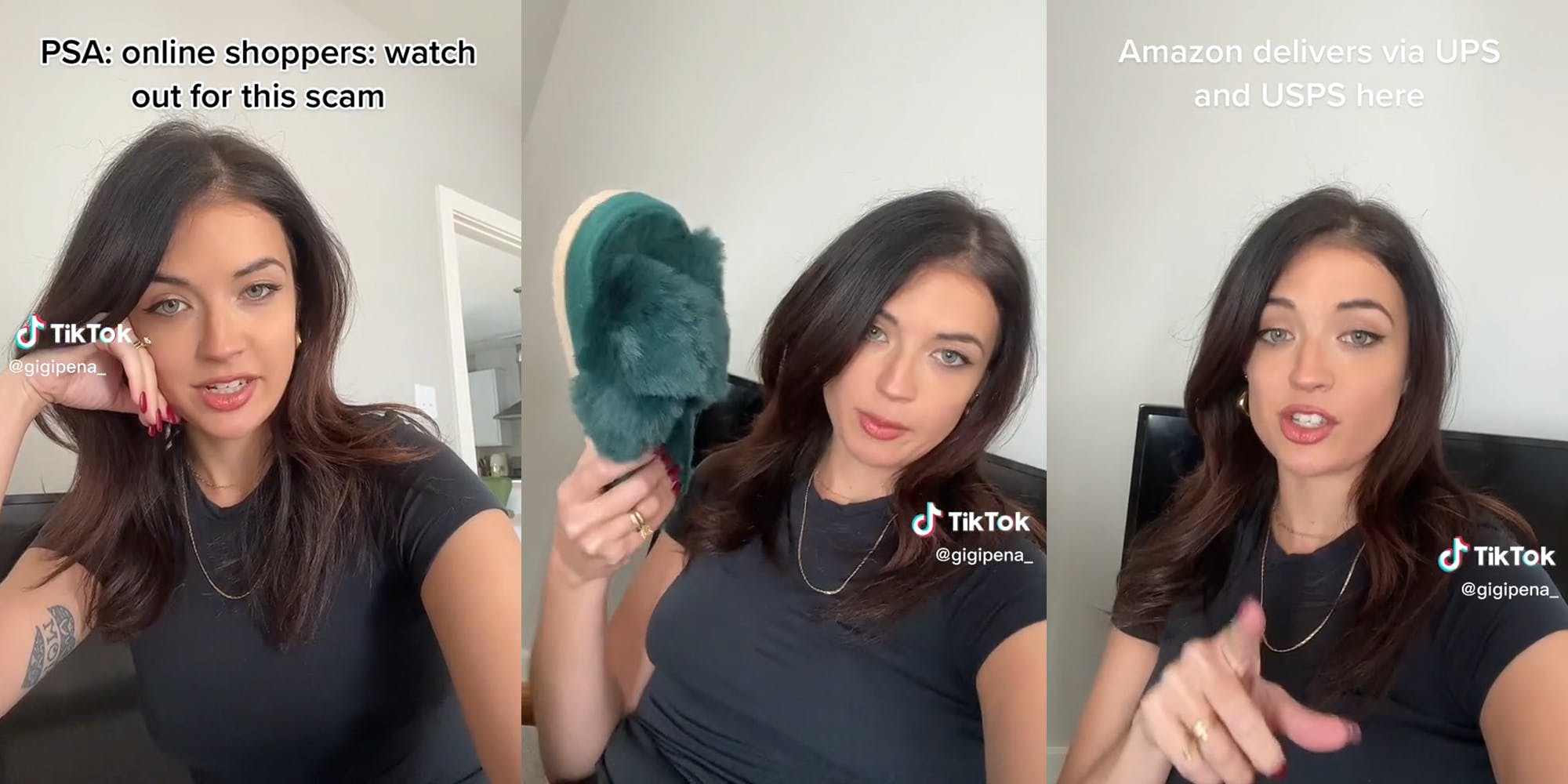 A woman on TikTok is warning her followers to be wary of scammers trying to schedule redeliveries for online orders during the holiday season.

The TikToker, Gigi (@gigipena_), says in one of her recent videos that she encountered one such scammer and almost fell for their trick. Now, she feels like it’s her “duty” to warn everyone else.

In the video, Gigi says she has been trying to return a pair of slippers that she ordered online through Amazon. But because of the high influx of holiday orders, Amazon hasn’t been able to pick up her package for return.

The TikToker says she has repeatedly received failed delivery notifications through the Amazon app that she knows are “legit.” Then she got a text message that appeared to be from Amazon asking her to reschedule her delivery. Gigi says she was distracted when she got the message and didn’t think twice about clicking the link in the text message.

The link took her to an application form for re-delivery, Gigi says. She began filling it out until she realized that it asked for her credit card information for a re-delivery charge.

“Immediately, I knew this was sketch, and I’m an idiot,” Gigi says in the video.

She explains that UPS, USPS, and FedEx will never charge customers for redelivery. However, she says she was fooled by the text message because it took her to a website that looked “really legit” and “identical” to the UPS website.

“If you get one of these texts, abort mission,” Gigi warns her viewers. “Don’t even open it. Block the number.”

The TikToker isn’t the only one getting scam texts. Other users commented saying they frequently receive similar messages.

“Not to brag but I’ve been receiving these texts all year. Idk how to stop them,” one viewer commented.

“I’ve gotten those texts when I don’t even have packages coming to me lol [laughing emoji] I delete them,” a second viewer commented.

A third wrote, “I constantly get the ‘we’ve seen some unusual activity on your Amazon account. It has now been locked’… with a sketchy email name. While I’m literally on Amazon shopping [laughing emoji].”

Some users said they had to order new credit cards after accidentally falling for the scam.

“Yup this happened to me and I filled it out half asleep [facepalm emoji] canceled my card asap!” one user said.

Another user wrote, “I was distracted and I fell for it [crying emoji], had to order a whole new card.”

Others shared their tactics for reporting or flagging scammers.

“Y’all Amazon and most other companies have a tab on the website where you can view every email or text they’ve sent you so you can check the validity!” one viewer shared.

“I always contact customer service via email and they usually want the info and links from these,” another viewer commented.

The Daily Dot reached out to Gigi via TikTok comment and email.

Conspiracy theorists are outraged over fake Satanic coffee cups from Starbucks
‘I actually cannot tell this is a turkey sub’: Customer calls out Subway after receiving sandwich with just 1 slice of turkey 
Advertisement