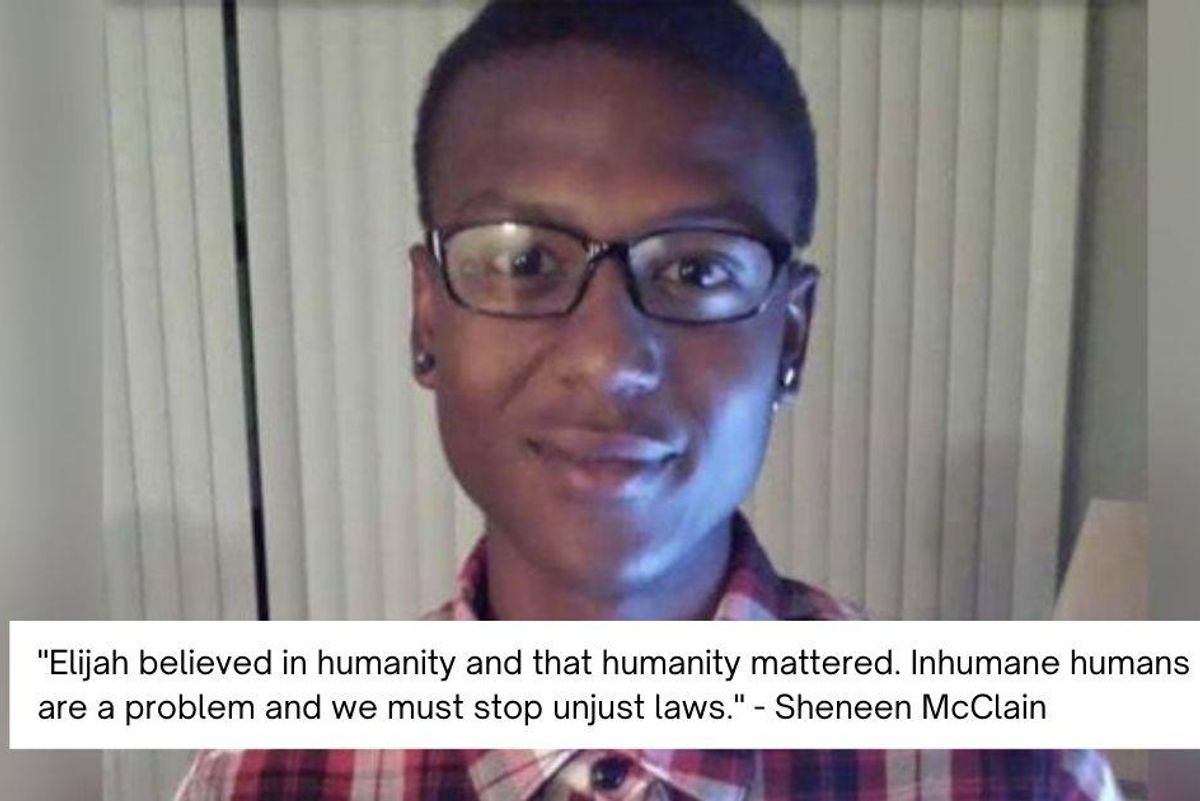 Elijah McClain was a kind, unique, and gentle soul, according to those who knew him. He was a vegetarian and a pacifist who worked as a massage therapist. He played his violin for shelter kittens during his lunch break because he thought the animals were lonely.

One evening two summers ago, McClain was walking home from a convenience store, waving his arms to music he was listening to on his headphones, when Aurora police approached him after getting a call about a “suspicious” man in the area. McClain was wearing a ski/runner’s mask, which his sister said he often did because he tended to get cold easily. Police tackled him to the ground and held him in a carotid hold—a restraint technique banned in some cities for its potential danger. He was given a shot of ketamine by paramedics. He had a heart attack on the way to the hospital and died there three days later.

He was a 23-year-old Black man. He was unarmed. He wasn’t a suspect in any crime. And his last words to the police were absolutely devastating.

The Aurora Police Department’s own investigation into the incident found no wrongdoing on the part of the officers involved—a determination that caused an outcry for justice in light of the body camera evidence. Millions of people signed a Change.org petition demanding a more in-depth investigation.

The city did launch an independent investigation last July, and the results have been released. You can read the full report here, but the gist of the findings is that the police had no legal basis to stop, frisk, or place McClain in a chokehold to begin with. The ketamine dose administered by paramedics was also based on a gross overestimate of McClain’s size. (He was given a dose for a 190-pound person, when he actually weighed around 140.)

Investigators also found that the investigation done by the police department’s Major Crimes Unit was deeply flawed, failing to ask even basic investigative questions of the officers involved.

“It is hard to imagine any other persons involved in a fatal incident being interviewed as these officers were,” investigators wrote.

“The body worn camera audio, limited video, and Major Crime’s interviews with the officers tell two contrasting stories,” the report states. “The officers’ statements on the scene and in subsequent recorded interviews suggest a violent and relentless struggle. The limited video, and the audio from the body worn cameras, reveal Mr. McClain surrounded by officers, all larger than he, crying out in pain, apologizing, explaining himself, and pleading with the officers.”

One of the officers involved in McClain’s, Jason Rosenblatt, was fired in July for replying “haha” to a text containing photos three other officers took, mockingly reanacting the chokehold at the site of McClain’s memorial. Interim police chief Vanessa Williams called the text exchange “a crime against humanity and decency.”

McClain’s mother, Sheneen McClain, released a statement through her attorney in light of the investigation’s findings, noting that Elijah would be turning 25 in three says and saying she is “relieved that the truth surrounding the death of her son is finally coming to light.”

New: Sheneen McClain, Elijah McClain’s mom, releases a lengthy statement through her attorneys. She says “she is relieved that the truth surrounding the death of her son is finally coming to light.” pic.twitter.com/M96WvXmx5z
— Elise Schmelzer (@EliseSchmelzer) February 22, 2021

“We applaud the independent review panel’s objective, studious, and comprehensive investigation into the events of August 24, 2019. At every step of the way — from their initial stop of Elijah through the involuntary injection of an extremely dangerous drug for no medical reason — Aurora officials indisputably violated Mr. McClain’s constitutional rights.”

After detailing some of the reports specific findings, the statement makes the point that investigators came to their conclusions using the information and evidence the department always had.

“Notably, this Report – with its stark and unequivocal indictment of Aurora officials’ conduct – is not based on new, revelatory evidence,” it reads. “It is based on evidence that Aurora has had in its possession all along. Yet, at every stage, Aurora has defended its officials for their blatantly unlawful actions and refused to discipline anyone involved in Elijah’s death.”

Independent investigators who were tasked with reviewing the death of Elijah McClain released the results of their… https://t.co/b58LnemwoN

The statement also describes the “sham investigation” the police conducted “in order to exonerate its employees and hide their wrongdoing.”

Ms. McClain’s statement also acknowledges that Elijah’s wrongful death at the hands of police is part of a larger story.

“Elijah’s family recognizes that Elijah is but one person on an ever-growing list of unarmed victims of police-related killings,” it states. “The problem of police abuse continues to plague minority communities throughout the country. This case is a textbook example of law enforcement’s disparate and racist treatment of Black men. Aurora’s continued failure to acknowledge the wrongdoing of its employees only exacerbates the problem.”

Finally, a quote from Sheneen McClain sums it all up.

“Elijah believed in humanity and that humanity mattered,” she said. “Inhumane humans are a problem and we must stop unjust laws.”