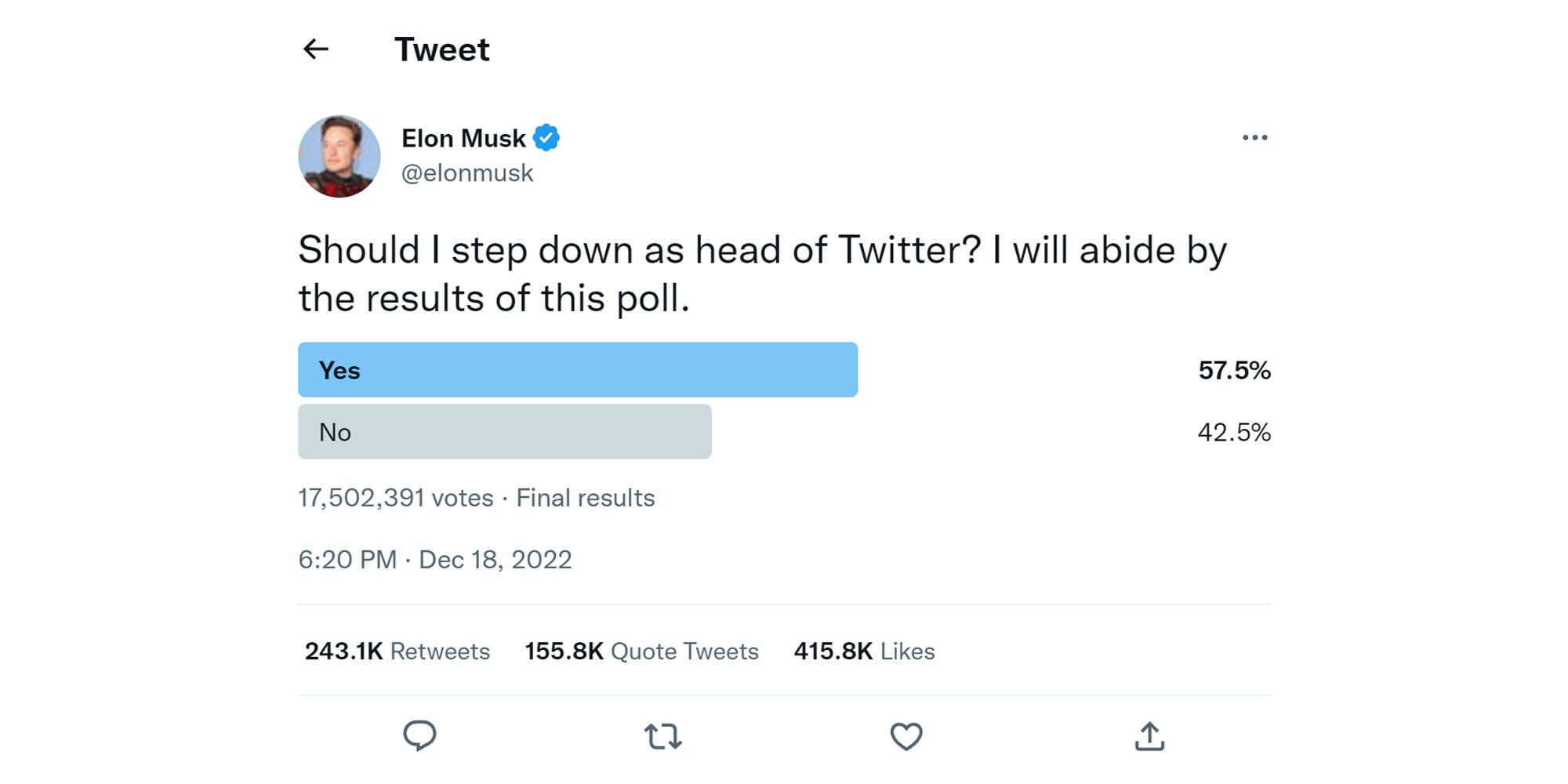 Elon Musk has a long history of overpromising and underdelivering, so anything he proclaims he’ll do should be viewed with healthy skepticism.

But last night he offered people just a bit of hope in the form of a Twitter poll that doubled as a referendum on his brief, chaotic tenure as the social media network’s “Chief Twit.”

“Should I step down as head of Twitter? I will abide by the results of this poll,” he wrote.

Musk has only been in charge of the site for barely two months, but it’s already been an impressive run of erratic decisions, botched rollouts, and widespread criticism.

The latest uproar came when Musk banned the accounts of several journalists and accused them of putting his child in danger. Musk and Twitter later rewrote policies to justify those bans, although the suspensions have already been walked back in a number of cases.

Just Sunday, Musk announced that Twitter would no longer allow people to promote their presence on other platforms after a number of users tried to build up bases at alternative sites like Mastadon in case Twitter crumbled.

So it’s no surprise that Twitter users voted against Musk.

Out of 17 million votes, 57.5% said he should. The poll closed earlier in the morning. While that may seem like an open-and-shut case, with Musk stepping down, he previously blamed bots for the results of other polls. However, Musk has claimed to clean the site up of bots, so he may not have that excuse to fall back on this time.

Since he launched the poll, Musk has dropped a few cryptic tweets, like writing, “Those who want power are the ones who least deserve it,” which is odd, because he sought out to buy Twitter himself.

Musk, even if he does step down as “head of Twitter,” will still own it, meaning he would have complete control of whoever he wanted to install as CEO. Or he could simply run it as owner and eschew a top executive.

As Musk also tweeted Sunday night: “Be careful what you wish, as you might get it.”

‘Only a matter of time before they take it off the menu’: Panera customer claims chain is moving Charged Lemonades behind the counter
‘NO DIFFERENT than clipping coupons’: Walmart worker responds to ‘Broccoli-gate,’ urges shoppers to cut off excess produce
Advertisement