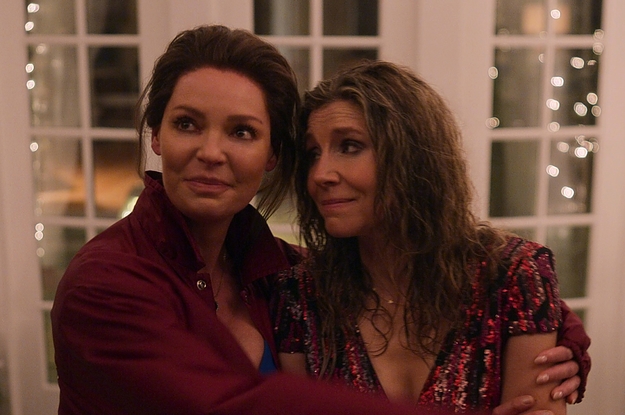 The show is based on a massively bestselling 2008 novel of the same name by historical romance writer Kristin Hannah, following the ups and downs between best friends Talullah “Tully” Hart and Kate Mularkey. Hannah told Netflix’s Tudum that she’d wanted to fill a market gap for younger boomer women, who’d been relatively absent from pop culture. So she wrote an “epic anthemic novel about women’s friendships that included all the music and the ambition and the things that we were struggling with in my generation.”

The book, which sold 1.2 million copies, follows the pair from their ’70s teen years through their struggles as career women juggling relationships in the ’80s and ’90s and into the early aughts.

The series is Grey’s Anatomy star’s Katherine Heigl’s big comeback — as both actor and producer — after she was half-banished from the industry’s A-list following some movie flops and industry chatter about her being a “difficult” woman (for calling out workplace harassment and the churning TV economy). Tully is Firefly Lane’s central character, an ambitious newscaster turned talk show host who struggles to let people into her life, except for her best friend, writer Kate (played with goofy allure by Scrubs star Sarah Chalke).

When the first season came out last year, the series shot to no. 1, stayed in Netflix’s top ten for weeks, and was quickly renewed. (Netflix is notoriously guarded about numbers, but reported that Firefly Lane got 49 million views within its first 28 days.)

Upon its release two weeks ago, the first nine episodes of the second season also quickly reached the top of the streamer’s list and has remained in the top three since then; a final installment is coming in summer 2023.

Firefly Lane didn’t get great reviews; critics took issue with the structurally messy way it moves around the three timelines. But the storytelling clearly strikes a chord. And its populist appeal and frothy charm rely on a commitment to treating friendship as equivalent to romance, and unpacking the utopian possibilities of friendship for women.

The show lavishes as much detail on the friends’ backstory as The Notebook did on its lovers’. The girls meet when Tully and her single mom move to Kate’s neighborhood in Washington state. (The book was partly inspired by Hannah’s years growing up in Sonoma, Washington, and attending the University of Washington.)

From the start, the series traffics in tropes. Tully is the pretty one and Kate is supposedly the awkwardly nerdy one, a duality stereotypically conveyed through Kate’s Coke-bottle glasses. (Talented actors Roan Curtis and Ali Skovbye play the ’70s teen versions of Kate and Tully.) The girl in the glasses convention of many teen movies typically symbolizes the “before” of a transformation undertaken to impress a boy — as in the ’90s rom-com She’s All That. Instead, here it’s used to create contrast in the budding friendship narrative.

As the show moves back and forth in time, we see how they were shaped as women, and what their friendship meant to each of them. Kate grew up in a “perfect” family with a stay-at-home mom and loving, respectful dad. Tully had to deal with a traumatized single mom, Cloud (Beau Garrett), who dealt with substance abuse issues and whom she had to basically parent.

The show gets at big themes of intergenerational trauma: how Tully’s relationship to her mom made it hard for her to trust people, making her friendship with Kate a valued safe space. In one scene, her hippie mom, uncomfortable with the uptight suburban vibe, acts out at a party, accidentally flashing a crowd of dads. A fight between Tully and Kate over a boy becomes secondary, as Kate understands that she has to care for her friend in the aftermath of Cloud’s behavior.

Heidi Klum Wore A Dress To The “Avatar 2” Premiere That Created The Illusion Of Moving Water
“I’ve Never Hated Someone So Much For Something So Petty”: People Are Calling Out Things You Should Stop Doing In Public, And Wow
Advertisement