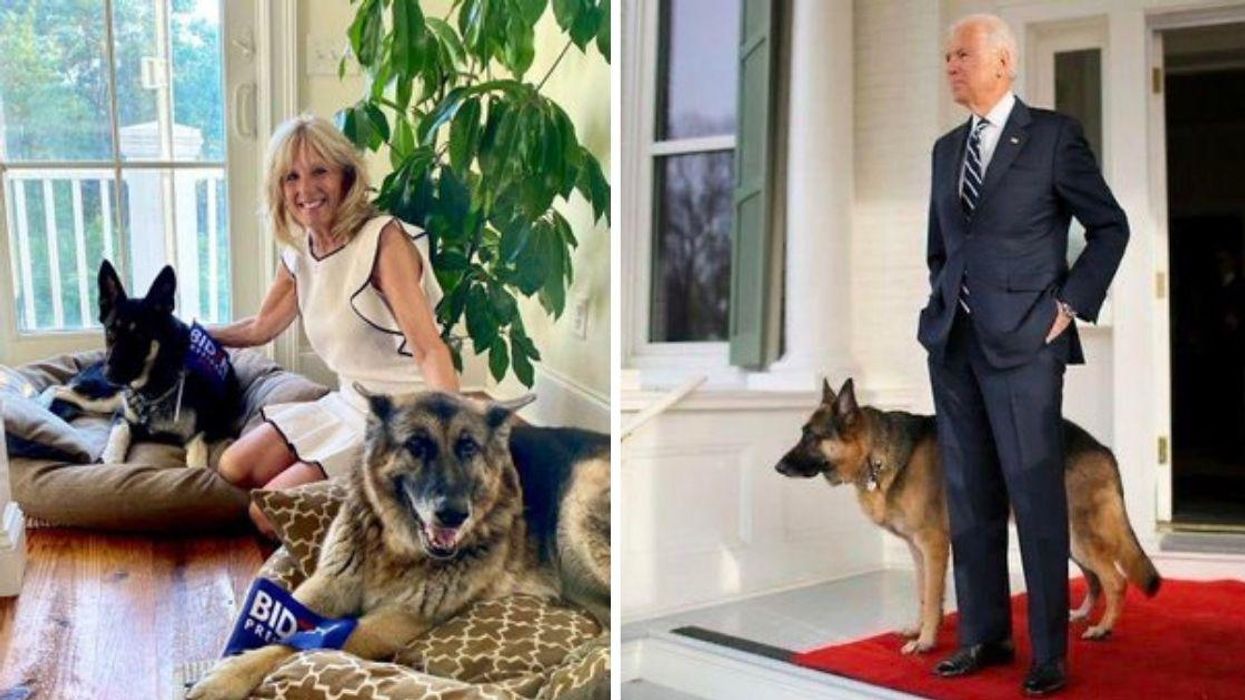 President Trump has exited the White House as the first president in 100 years to not have a pet. President Biden is bringing the presidential pets tradition back, but with a special “first” of his own.

Champ and Major, the Bidens’ German shepherds have officially moved into the White House, with Major being the first rescue dog to live there. The Bidens adopted the now 3-year-old good boy from the Delaware Humane Association in 2018.

Anyone who’s ever moved with a pet knows that transitions can be tenuous. New sights, smells, and sounds, in addition to the change in routine, can be stressful for animals. And when you’re a human who is not only moving into a new home, but also starting a new job as the president of the Untied States, you might need a little time to adjust right along with your pets.

That’s why the Biden family took some time to fully transition their two dogs into the White House this week. Though the president and first lady moved in on January 20, the first doggos didn’t officially move in until five days later, after a gradual introduction to the building and grounds to get them used to their new home.

They sure do look happy to be with their people in The People’s House now, though.

Guess who moved in? Hoomans wanted some peace and quiet to make sure we didn’t get scared before moving us in.… https://t.co/h2t0uzASXM

There are even social media accounts dedicated to the DOTUS on Twitter and Instagram, including The First Dogs of the United States and the oh-so-punny The Oval Pawffice.

Together we will paw an American story of hope and yummy nom noms, not fear & dry food. Of unity and squeaky balls,… https://t.co/dtSSheEAhD

(The COTUS reference here refers to Winston, the Bidens’ granddaughter Naomi’s cat. Winston will serve as First Cat until the Bidens bring in a kitty of their own, which they’ve talked about doing.)

@AshaRangappa_ 🐾 Hi Asha, Winston Biden here. I am the de facto COTUS, as I am the only Biden cat right now. I live… https://t.co/U91WpNMDRt

Much has been made of First Doggos during the presidential transition. Major had an honorary “Indoguration” that raised more than $200,000 for the Delaware Humane Association. And The Oval Pawffice even shared a “Pawnstitution” that reads:

“We the Pets of the United States, in order to form a more purrfect Union, establish mixed breed equity and fur color Justice, ensure domestic and wild Treatquility, provide for the common pawtection, pawmote the animal Welfare, rescue and adoption, and secure the Blessings of Liberty of Nom Noms to ourselves and our pawgenies, do pawrdain and establish this Pawnstitution for the United Pets and Wildlife of America.”

Not only that, they even shared their oath: “We do solemnly woof / meow that we will faithfully execute the pawffice of President of the United Pets, and will to the best of our pawbility, preserve, pawtect and defend the Pawnstitution of the United Pets and Wildlife of America.”

We do solemnly woof / meow that we will faithfully execute the pawffice of President of the United Pets, and will t… https://t.co/JT80v1oQ12

The last president to not have a pet in the White House was William McKinley, who was assassinated in 1901. When President Trump was asked about not having a dog, he replied that he didn’t have time.

Too-busy-for-a-dog seems like odd reasoning from someone who played 261 rounds of golf while president and who theoretically could afford to hire someone to take care of a pet’s every need while still enjoying the companionship and happiness that pets bring, but okay.

People are going gaga over the return of first pets to the White House, for both the light-hearted fun of it as well as the care and compassion that they represent. There’s just something comforting in seeing people’s bonds with their animals, and it’s clear that Champ and Major are attached to their humans. Science has also shown that dogs can sense when a person is untrustworthy, so seeing the leader of the country happily hanging out with dogs is a good sign.

Welcome to the White House, Champ and Major. Glad to see such good boys at our president’s side.