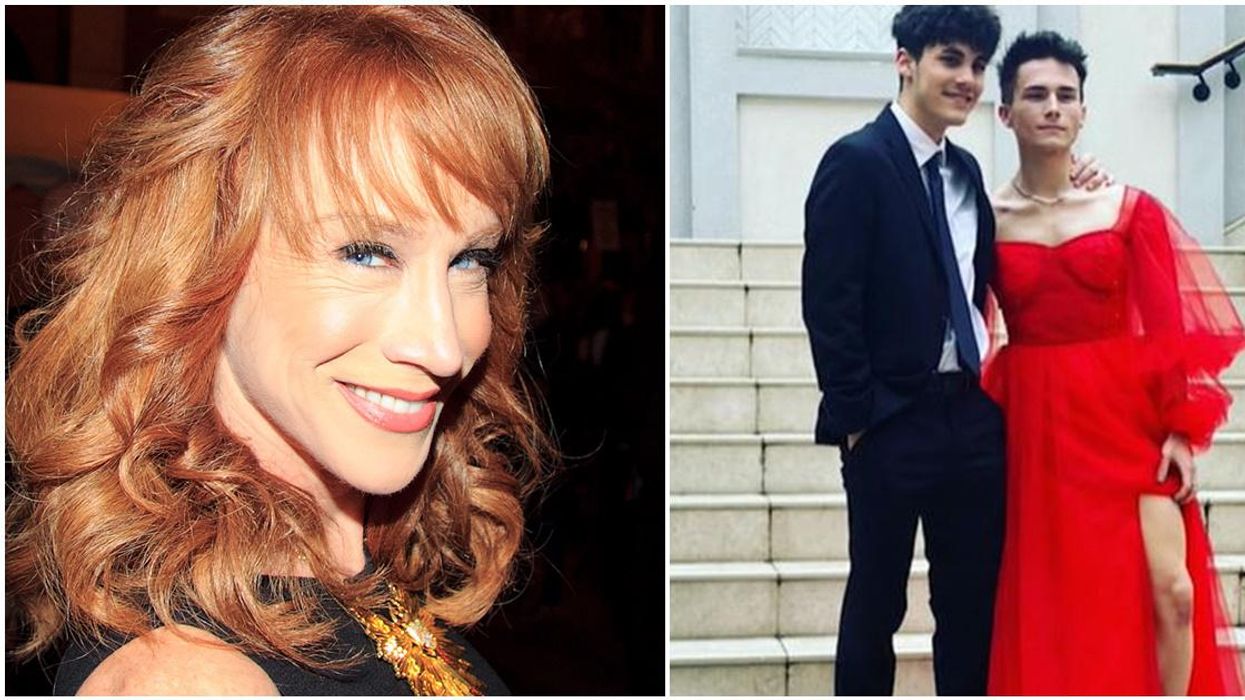 A gay teen taking pictures at his senior prom was ridiculed by a man on Saturday outside of the Harpeth Hotel in downtown Franklin, Tennessee. Dalton Stevens, a senior at Franklin High, was having a photoshoot with his boyfriend, college freshman Jacob Geittman, when they were verbally accosted by a man later identified as Sam Johnson, 46.

Geittman claims that Johnson got into Stevens’ face as they were taking photos. This part of the incident was not captured on video.

Stevens said that Johnson then began hurling homophobic slurs at him.

Homophobic POS in Tennessee harasses a teenager for wearing a dress to prom https://t.co/Ftt2a184jX

Did Johnson really think that the young gay couple cared to hear his thoughts on fashion?

In the video, Johnson can be seen trailing the teens with a condescending smirk on his face saying, “You look like an idiot,” even though the couple told him to stop.

“I’m sorry, I’m gorgeous,” Stevens says in the video. “Are you?” Johnson responded.

Towards the end of the clip, Johnson can be seen taking a swipe at Geittman’ss phone and demanding that he stop filming him. In a later video, Geittman claims that Johnson knocked the phone out of his hand and that he was “pretty obviously drunk.”

Stevens decided to wear a dress to prom because he wanted to make a bold statement and because he views clothing as “genderless.”

After the video was posted online it quickly went viral after being shared by comedian Kathy Griffin, actor Billy Porter, and musician Richard Marx. Porter’s support for the teens is wonderful given his history of making controversial fashion choices. He wore a dress to the Academy Awards two years ago to challenge to the Academy’s rigid black-tie dress code.

Griffin took no prisoners in her support for the teens. In her tweet she named Johnson, saying, “It seems like he’s dying to be online famous.” The video received 9.7 likes and over 4,000 shares.

If this is Sam Johnson in Nashville, Tennessee, the CEO of @VisuWell, healthcare-tech-growth strategist, married to… https://t.co/mwBVCjvINK

That smirk on his face as he badgers that teenager at a prom is truly disgusting and terrifying. He looks like if he weren’t in this setting but out somewhere more remote, he would do a lot more than just harrass
— susan (@susan52132641) April 26, 2021

It amazes me the restraint some people have. Like the moment that homophobic asshole hit his hand at an attempt to smack the phone from it, is the moment they would be grabbing their phone to call an ambulance. pic.twitter.com/EPS9oALTfU
— Nicholas Jones (@Nickool4u) April 26, 2021

Wow – he’s a total psycho creeper & should never be allowed around kids ever again. Seriously, the way he’s looking at that kid enjoying every second of mocking him. Gross.
— Deirdre (@Deirdre131) April 26, 2021

Is that this guy? And it’s mental health? It’s men like this that cause mental health issues not help them.
— Lee Reagan (@RLReagan) April 26, 2021

It didn’t take long for Johnson to face consequences for taunting the teenagers with homophobic slurs. On Monday, he lost his job as the CEO of Visuwell, a telemedicine company.

“Visuwell’s culture emphasizes respect, kindness, and compassion, especially for those from traditionally marginalized communities, and we maintain a zero-tolerance policy for intolerance of any kind,” a statement posted to Twitter reads.

“Mr. Johnson’s actions contradicted the high standards we set for ourselves in promoting the health of those who use our platform,” the statement continued.

Johnson responded to the incident by claiming that the confrontation was not about the dress, but the “obnoxious, loud behavior by this group of teens.” He said he approached them because they were shouting obscenities around families and children.

Johnson’s homophobic behavior in front of the teens was disturbing, to say the least. It also showed an incredible lack of self-awareness. Why would anyone behave that way when they know they’re being filmed? It’s 2021, you’re going to go viral in the worst way possible.

Kudos to Kathy Griffin, Billy Porter, and Richard Marx for jumping in and supporting the young couple by using their platform to expose those who threaten the LGBTQ community. Hopefully, this will make people like Johnson think twice before attempting to intimidate teenagers simply for dressing how they want.