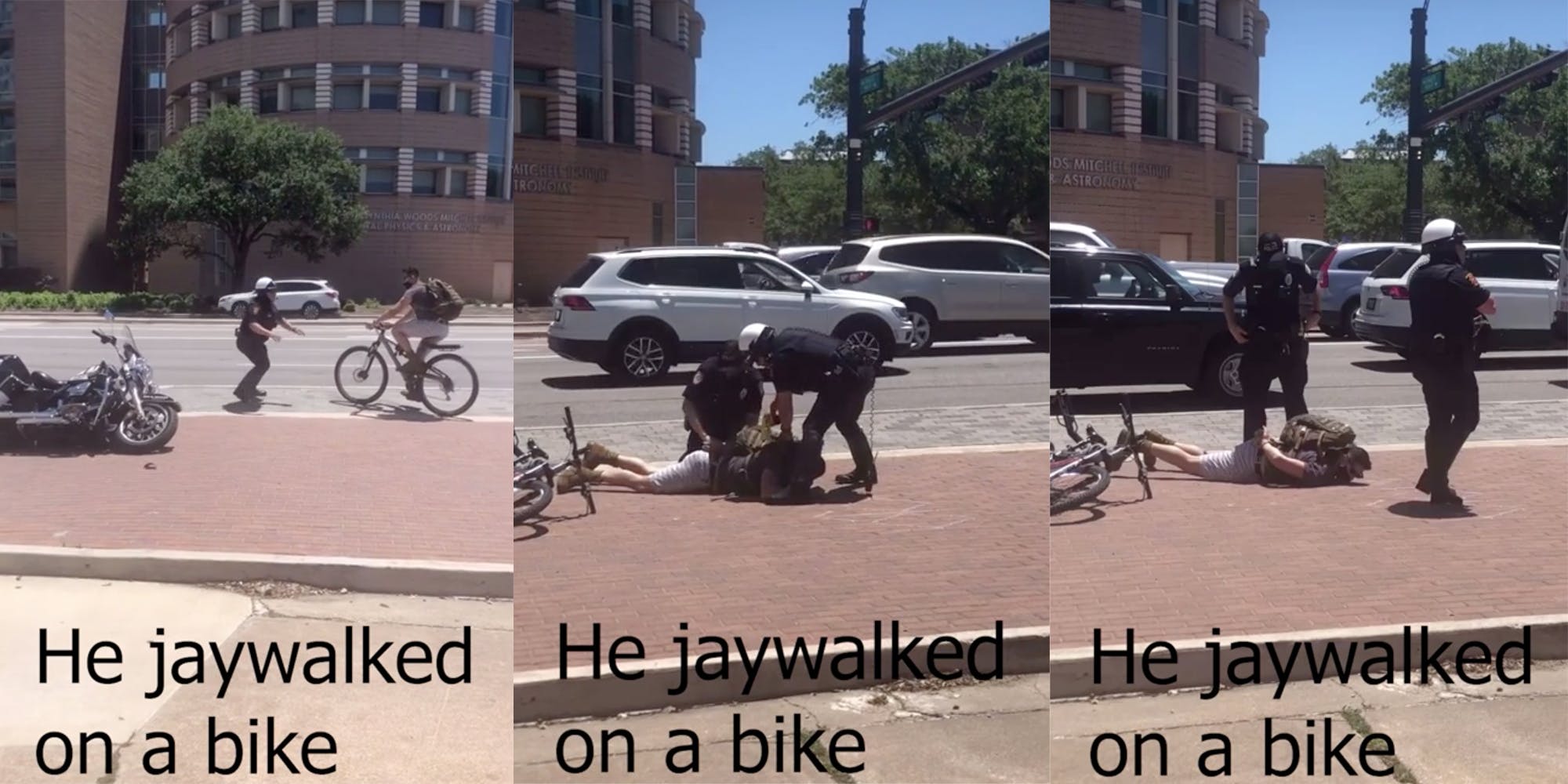 A video uploaded to Reddit on Thursday shows Texas police tackling and using a stun gun on a bicyclist accused of running a red light.

The clip was posted to the Public Freakout subreddit page. Viewers can see a police car with lights and sirens trapping the biker as another officer chases him on a motorcycle. Meanwhile, onlookers laugh in the background.

“He jaywalked on a bike,” the caption of the video says.

The second police officer pulls up on his motorcycle and runs toward the pedestrian. The officer yanks the man off his bicycle and pulls him to the ground.

“You’re under arrest,” the officer yells as the man’s bike slams on the ground with the weight of the officer against him.

The other officer runs over and presses his weight against the pedestrian while the first officer grabs a pair of handcuffs.

“Get on your stomach now,” the officer says.

As one of the officers pulls a stun gun from his belt, the other holds the pedestrian to the ground. The officer uses the stun gun on the man, and the man yells out in pain.

“Ow! Fuck,” the man says, wriggling on the sidewalk.

“Get on your back,” the officer replies.

The video continues as the pedestrian is handcuffed, face down on the sidewalk. The person filming says, “Oh, my God.”

“I’ve got a mental illness, dipshit,” the pedestrian says. “Go to fucking jail.”

“You’re under arrest,” the officer responds.

“You’re under arrest for a traffic violation,” the officer says.

As the video ends, one of the officers looks directly at the camera while the other grabs the pedestrian from the ground.

According to Texas laws, bicyclists must abide by motor vehicle laws on public roads, including stopping at stop signs and red lights. College Station police originally spotted the bicyclist running a red light and pulled him over for the offense.

On Reddit, users were shocked by the police officer’s use of force over a traffic violation.

“Resisting is such a bullshit charge,” one user wrote. “I jaywalked in front of a cop the other day, jaywalking is a blue law that doesn’t get enforced unless it’s by a megalomaniac. No excuse.”

Other users noted that the video represented yet another instance in which police officers in the U.S. used their platform to demonstrate control rather than help keep order.

“Run a red light on a bike? That’s death for you!” one person commented. “That’s how we roll in the most freest country on Earth!”