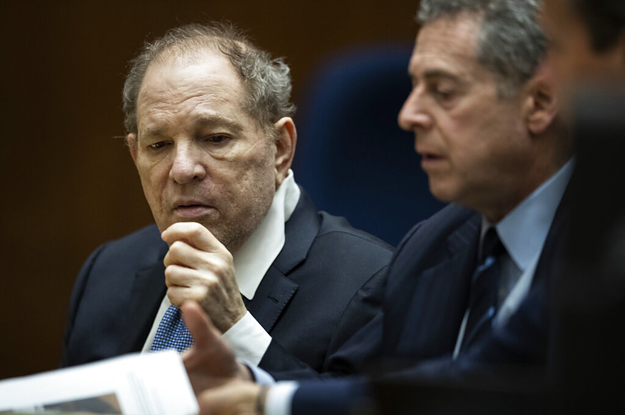 Those four women included an Italian model and actor referred to as Jane Doe 1; Jane Doe 2, who has accused Weinstein of assaulting here when she was a 23-year-old model and an aspiring screenwriter; Jane Doe 3, who was a 29-year-old licensed massage therapist when she says Weinstein assaulted her; and lastly, Jane Doe 4, revealed to be Jennifer Siebel Newsom, the filmmaker and spouse of California Gov. Gavin Newsom, who has accused Weinstein of sexually assaulting her when she was an actor starting in the industry.

Jane Doe 1 testified that Weinstein assaulted her in February 2013 when she was visiting to attend the Los Angeles Italia Film Festival and the Academy Awards. She said he showed up at her hotel room door unannounced late at night and barged into her room, then forced her to perform oral sex on him and raped her.

“I was afraid of what he was doing, how he was acting, in my room,” she told the court. “I was asking him, please, to leave.”

“He forced me to do what he asked,” she added. “I was crying, choking.”

During cross-examination, Weinstein’s defense attorneys pressed Jane Doe 1 on her decision not to tell police about the incident until after the rise of the #MeToo movement in 2017, even though she testified that she had told friends before 2017.

Jane Doe 2 testified that Weinstein sexually assaulted her in a Beverly Hills hotel bathroom in 2013.

She also testified at Weinstein’s New York trial as one of the “prior bad acts witnesses” — people who provide testimony on experiences they have had with the defendant, which prosecutors then use to illustrate a pattern of criminal behavior.

In the Los Angeles trial, Jane Doe 2 said she met Weinstein hoping to pitch a script and get into the film industry. At the time, she was a working model but was interested in switching to the film industry. Though they had planned to meet in the hotel lobby, she said Weinstein’s personal assistant — who was her friend and had set up the meeting — instead ushered her into his room and shut the door.

“I was very numb feeling. I felt like I was outside of my body watching what was happening; I couldn’t move; I was frozen. I was so scared,” she said. “I was scared of Harvey Weinstein — that he would hurt me, or send someone to hurt me, or ruin my career, or make my life hell.”

Jane Doe 3, the massage therapist, said that Weinstein trapped her in a bathroom, then masturbated in front of her and groped her after she gave him a massage in 2010.

“I said, ‘What are you doing?’” the woman told the court. “This is not appropriate! Can you please go back in the other room, and get your clothes on?”

Jane Doe 3 began crying as she told the jury how terrified she was as she feared Weinstein would also rape her.

Siebel Newsom, also known in court as Jane Doe 4, first came forward about her experience with Weinstein in an op-ed published by the Huffington Post in 2017, just one day after the original New York Times report.

On the stand, Siebel Newsom testified that Weinstein raped her in a hotel room during what she thought would be a business meeting in 2005, when she was a young actor in the industry.

“Horror! Horror!” she said, recounting how she felt at the time. “I’m trembling. I’m like a rock; I’m frigid. This is my worst nightmare. I’m just this blow-up doll!”

During the intense cross-examination, Weinstein’s attorneys asked Siebel Newsom about the graphic details of her testimony, including the sounds she made during the alleged assault.

They showed the court several business emails she had sent to Weinstein in the months and years after the alleged rape. The defense also questioned her about political donations that Weinstein had made to her husband’s campaign.

25 Just Way Too Funny Tweets About NY Mag’s “Nepo Baby” Cover Story
If You’re From An Immigrant Family, Tell Us About An Act Of Kindness Your Family Was Shown When Adapting To Life In The US
Advertisement