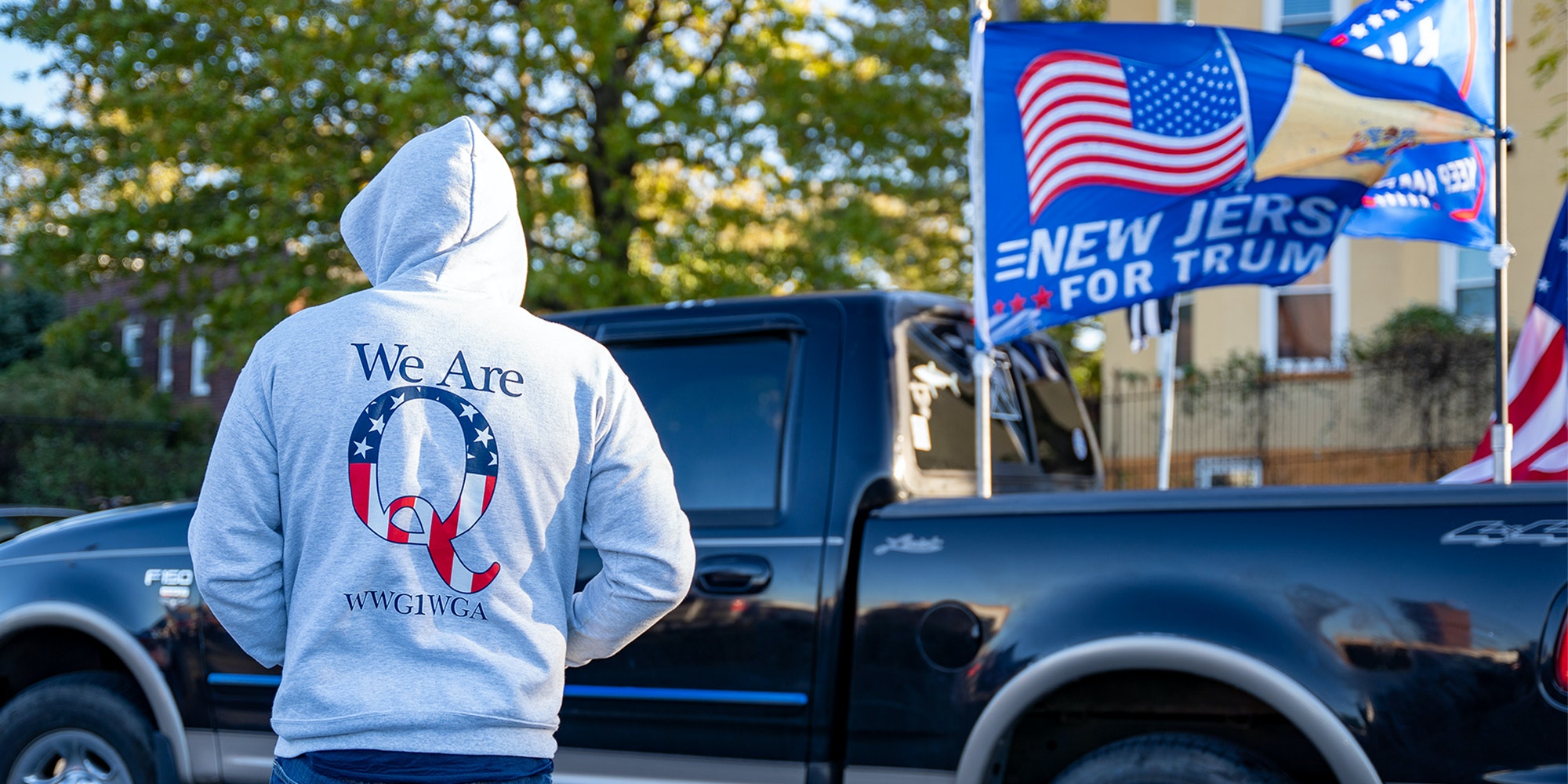 QAnon was the strangest outgrowth of Donald Trump’s presidency. The conspiracy theory sprung from the hellfires of Pizzagate holds that Trump has been fighting a secret cabal of liberal elites and government insiders who worship Satan, rape children, and eat them.

Now that Trump’s out of office and staring down a Senate impeachment trial, some high-profile conservatives who once gave QAnon oxygen are trying to smother it before it can do any more harm. Much like QAnon, they’re using a conspiracy theory to dissuade the masses: It was a psychological operation, or psyop, created by the very intelligence community that makes up the “deep state.”

In the three years since it first appeared on 4chan, QAnon has attracted millions of faithful worldwide. As the following grew, their beliefs became even more bizarre than Satanist cannibalistic pedophiles. John F. Kennedy Jr. is alive and running for Congress, or perhaps as Trump’s 2020 running mate; former Vice President Mike Pence is a shapeshifting reptilian humanoid; hundreds of cabal members have been executed or imprisoned at Guantanamo Bay and clones or androids have taken their place; to name only a few.

Through it all, they fervently embraced Trump and, true to form, he responded in kind. As QAnon grew in influence, and a few followers even wormed their way into Congress, some of his biggest supporters followed suit.

Then came the deadly Capitol riots, where QAnon was a major presence. This, coupled with Trump’s fall from power, if not grace, have those same supporters doing a rapid about-face on the conspiracy theorists they once welcomed with open arms.

Now that it’s outlived its usefulness, QAnon is being unceremoniously cast aside.

Steve Bannon is among the best known of the Trump crowd who has in recent days made the case that it was a psyop and the Federal Bureau of Investigation was behind it. As Media Matters reported on Tuesday, Bannon’s newsletter recently included a link to an article making the convoluted claim that the alleged Russia-linked accounts that initially bolstered QAnon were actually FBI agents masquerading as Russians to perpetuate the 2016 election interference scandal. The presumed purpose of the QAnon psyop is even more outlandish. Their goal, the article posits, may have been to discredit Trump’s base by poisoning their minds with garbage.

Bannon personally dismissed the QAnon theory that mass arrests of Democrats were imminent as “nonsense” on the Jan. 21 episode of his show. He also said that believers are “in the way” with their “happy talk” and “fantasies.”

His co-host Raheem Kassam likened QAnon to cosplay and spoke of bringing “them back to reality.” “It’s tough love,” Kassam added.

This comes after months of Bannon repeating many of the same election conspiracy theories and calls for violence popular with QAnon.

Bill Still is another big name in conservative circles who’s now shunning the conspiracy he once bolstered. His YouTube show, The Still Report, which has 177,000 subscribers, regularly traffics in conspiracy theories and has repeatedly given airtime to QAnon hero Mike Flynn.

Not any more. Now Still says that QAnon is a psyop created by United States intelligence.

“QAnon was a Russian inspired psyop … Its purpose was to neutralize public outcry from the Trump supporters by creating the false impression that a secret cabal of powerful military intelligence officials had everything figured out and in control,” he said on a Jan. 22 episode.

Still also says that he suspected it was false all along, an odd claim for a man who included a lengthy clip from an interview with Flynn on an episode just five days earlier. In it, Flynn falsely claims that Trump won the election, lies about Dominion Voting Systems, and the like, all of which are believed by QAnon followers.

Still’s bizarre theory is that that the intelligence community created QAnon to distract people from volunteering to be poll watchers.

Because they were dazzled by reptilian humanoids and longings for mass executions, “none of us bothered to take time to volunteer for the most important job we could’ve done to help Mr. Trump: poll watchers,” he said.

Still later reads at length from an article that claims QAnon was mirrored on a Russian counterintelligence operation from the 1920s.

“‘Operation Trust’ was a Bolshevik counterintelligence operation run from 1921 to 1926 aimed at neutralizing opposition by creating the false impression that a powerful group of military leaders had organized to stop the communists’ takeover,” the article states.

In what some may find intriguing, this article rehashes an argument WikiLeaks made about QAnon years ago.

In 2018, WikiLeaks tweeted that QAnon promotes the same goals as the Central Intelligence Agency.

No one pushing the theory that U.S. intelligence created QAnon has offered any explanation as to why it pretended to be a government insider in order to make itself the enemy, nor have they explained why Trump’s own intelligence agencies would be motivated and able to covertly run a plot to sabotage him.

But the cast of characters around QAnon is so both so complex and convoluted that it’s easy to see why people might link it to an intelligence agency over an organic movement. And the course correction has its own intrinsic value, regardless of whether those touting it believe it.

It does make sense that those who tried to use QAnon to maintain, then steal, control over the government would claim the government was behind the whole thing when the political winds shifted. Their attempted insurrection was horrifying and deadly, but in the end it was also an utterly embarrassing failure. Recognizing that QAnon is now a liability as a result, the obvious next play is to simply blame the deep state for it all. Again. And by pinning it back on the government, they can stoke the same kind of rage QAnon fomented, while trying to skirt by the need to walk back or explain what really happened.

And if they can use it regain or grow followers, why wouldn’t they?

Even Alex Jones, who himself has quite a taste for conspiracy theories, is parroting this one. On Jan. 21, he called QAnon a “lie,” “cult,” and “mind control.” He blames the CIA.

“It’s a disinformation counterintelligence operation and they know that while you’re so angry, they want you to forget about how you got lied to thousands of times,” Jones said.

“In a few weeks or a few months, they can develop a new gaming strategy, psychological warfare system, to throw out some new breadcrumbs and lure you back in and keep having you work for the deep state.”

He went on to warn people against believing secret sources and urged them to look into Operation Trust.

“You’ve been suckered, bitches,” he says, referring to messages from QAnon proponents who are now leaving their followers high and dry.

True to form, at the end of the video, Jones encourages people to join his efforts to expose some of the “real” QAnon theories.

“Q is a psy-op according to Alex Jones at InfoWars. He likened it to Operation Trust. It’s meant to look like truth but it is infiltration,” one said recently.

“I still have a voice in the back of mind saying Q could be a big elaborate psyop put in place to keep patriots calm while they do the Great Reset,” another commented separately.

But more are encouraging believers to keep the faith and to turn their back on anyone who tells them otherwise.

“Alex Jones is compromised,” one responded to his claims that QAnon is a psyop. “…Don’t fall for this bs.”

“Btw we shouldn’t encourage Steve Bannon or Breitbart either,” another said. “His war room is definitely filled with black hats.”

Prominent conservatives may be eager to turn the page on the conspiracy theory now that it’s outlived its usefulness, but they clearly have their work cut out for them if they hope to lure the QAnon faithful out of the depths of delusions they themselves fomented.

The post Here’s why prominent conservatives now are calling QAnon a ‘psyop’ appeared first on The Daily Dot.