MIAMI — For a first-time head coach, Mike McDaniel took a gamble during a training camp meeting when he playfully singled out recently acquired receiver Tyreek Hill in front of the entire team.

Hill, who owns the fastest speed of any ball carrier recorded by Next Gen Stats, was the fifth-fastest player at the Dolphins’ practice the previous day.

“I made a big deal about it,” McDaniel said. “I went over the top and said something like, ‘Dude, congratulations, you’ve been working hard. This is a great achievement.'”

For emphasis, McDaniel then turned to practice-squad receiver Braylon Sanders, who had the top time the previous day, and said: “Man, you’re the fastest guy on the Dolphins. This is awesome.”

The following practice, Hill was clocked at 23.48 mph — the fastest registered speed at any Dolphins practice, and faster than his in-game record of 23.24 mph.

McDaniel made his point, and so did Hill.

“So I was like, ‘OK, yeah, you’re different,'” McDaniel said. “On the field, off the field, it’s not happenstance that he’s able to have success.”

In an offseason highlighted by player movement, perhaps no trade was more impactful than the one on March 23 that sent Hill from the Kansas City Chiefs to the Dolphins in exchange for a 2022 first-round pick (No. 29), second-round pick (No. 50) and fourth-round pick, plus fourth- and sixth-round picks in the 2023 draft. 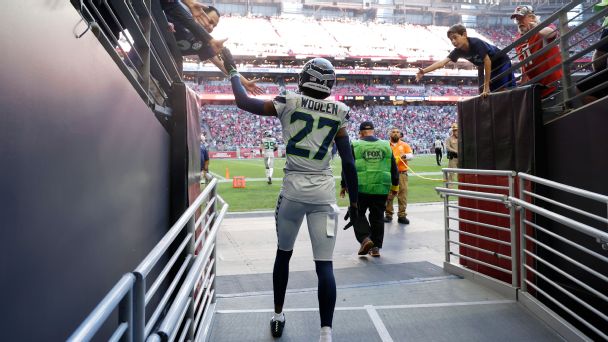 Miami immediately committed to Hill with a four-year, $120 million contract that made him the highest-paid receiver in NFL history in terms of average annual value. With the Dolphins second in passing yards per game (277.9) and seventh in total yards per game (367.8), they’re poised to field a top-10 offense for the first time since 1995, making the Hill deal look like a wise investment.

Hill will likely need another big game Saturday when the Dolphins (8-5) try to snap a two-game skid in an AFC East matchup with the Bills (10-3) in snowy Orchard Park, New York (8:15 p.m., NFL Network).

Hill has has the sixth-best odds to win MVP, according to Caesars Sportsbook. He has a league-leading 100 catches, and he’s second with 1,460 receiving yards, 40 behind the Minnesota Vikings’ Justin Jefferson. Both are on pace to challenge Detroit Lions Hall of Famer Calvin Johnson, who set the single-season record with 1,964 in 2012. However, regular seasons were 16 games long when Johnson played, one fewer than the current season.

The on-field benefit of adding Hill is obvious; behind the scenes, his leadership quickly won over his teammates. From his unwavering support of quarterback Tua Tagovailoa, to challenging teammates to recognize coverages, to buying pingpong paddles for the entire roster, Hill brought a combination of fun and leadership to a team at a crossroads.

In February, former Miami head coach Brian Flores sued the Dolphins, two other teams and the NFL, alleging discrimination regarding his interview processes with the Denver Broncos and New York Giants and his firing by Miami. And in August, the NFL fined the Dolphins and stripped them of draft picks for tampering with Tom Brady. While those conversations centered on bringing Brady on board as a limited partner and possible executive, there also was talk about having him play for the Dolphins.

Tagovailoa, whose future in Miami was uncertain, had to answer questions about the pursuit of Brady. He also had to get used to a new head coach as McDaniel was hired to replace Flores.

It was against that backdrop that Hill entered as a three-time first-team All-Pro and Super Bowl champion, and Hill didn’t shy away from the challenge. Even at 5-foot-9, Hill’s presence is as large as you’d expect from one of the NFL’s most successful players. You know when he enters a room, when he’s on the field. Outside of football, Hill has rubbed shoulders with internet celebrities like YouTuber-turned-boxing upstart Jake Paul; he has gone viral almost weekly on his podcast, “It Needed to be Said”; and he has opened a brick-and-mortar store for his fashion brand, Soul Runner.

But none of these ventures has distracted him from his day job, as teammates voted him a captain.

“I came in, who I am,” Hill said. “A fun guy to be around, trying to be the best teammate I can be and just help this team win and grow and show the guys how I got to where I am.”

Hill joked that when he first entered the Dolphins’ locker room, he told everyone that “I’m him,” and challenged Pro Bowl cornerback Xavien Howard to one-on-ones when training camp started.

His actual introduction wasn’t so braggadocious. In reality, he gifted each player a pair of Soul Runner sunglasses along with a custom pingpong paddle.

McDaniel said Hill has been an example of support and awareness. He’s often one of the first to congratulate a teammate after a touchdown; he even escorted Jeff Wilson Jr. into the end zone during Wilson’s 20-yard touchdown run in Week 10.

But his impact on Tagovailoa seems to have gone deeper. Hill’s public support of his quarterback drew national attention, notably when he called Tagovailoa the most accurate passer in the league during his introductory news conference in March, and later implied Tagovailoa was more accurate than the last quarterback he played with, former MVP Patrick Mahomes.

Hill later clarified his remarks, saying he didn’t mean them as a slight at Mahomes, whom Hill described as an “alien” playing a different game than everyone else. But Tagovailoa also was playing at a different level than just about everyone else as he was ranked at or near the top of most major passing categories. He’s currently second in QBR at 73.5, behind Mahomes’ 77.9.

However, the Dolphins’ offense has struggled over the past two weeks, and Tagovailoa, in particular, has appeared mortal. He recorded arguably his worst game of the season in Sunday’s loss to the Los Angeles Chargers in Week 14, completing just 10 of 28 passes for 148 yards and a 60-yard touchdown to Hill.

But Hill’s support never wavered. After the game, he attempted to take some of the heat off his quarterback.

“Tua is going to be Tua. He’s going to be our leader,” Hill said. “He played good enough for us to win the game, so like I said, I’m going to point no fingers at nobody.”

Hill actually pointed the finger at himself, despite the fact he carried the offense with a 57-yard TD off a fumble recovery and a 60-yard TD reception.

Officially, Hill was charged with one drop.

Hill’s personality came as a surprise to Tagovailoa, who said he didn’t expect the receiver to be so talkative and fun-loving, but the public offerings of support went a long way with the third-year quarterback.

During McDaniel’s time as the wide receivers coach for Washington in 2013, he developed a route for receiver Leonard Hankerson — a deep, outbreaking route that he said not many players are fast enough to run. When McDaniel joined the Atlanta Falcons staff in 2015, Julio Jones took ownership of — and was “unbelievable” at running — the route, according to McDaniel.

“It was like, ‘Whoa!'” McDaniel said. “I’ve been fortunate to be around Andre Johnson in his prime, Julio Jones in his prime, Josh Gordon, Pierre Garcon, leading the league in receiving. All these great, great players, and he is different.

“We knew then in OTAs that yeah, this is a different deal.”

It’s not just Hill’s speed. Dolphins wide receivers coach Wes Welker said he and Hill felt each other out through their first few weeks together, until Welker realized another quality that separates Hill from many players.

Hill can turn anything into a competition, even in the meeting room — where he has developed a point system for recognizing coverages during film study. And if any receiver is caught on tape losing a matchup with a defensive back, Hill personally administers the punishment.

“He loves all that stuff. He loves talking trash,” Welker said. “I think all of us [are] in there just talking trash. If somebody gets locked up in one-on-ones, he starts playing the [Akon] song, ‘Got locked up, they won’t let me out.’

“We have some fun with some of that stuff, but just ultra, ultracompetitive. He loves making anything a competition.”

As playful as he might be during meetings, Hill’s teammates know what he’ll bring when it counts.

“He proves it on the field with his preparation in general,” Dolphins receiver River Cracraft said. “It shows that he’s a guy who’s able to bring that to the meeting room and still come out prepared and locked in all the time.”

Hill made headlines four weeks into the season, when he spearheaded a decision to remove the pingpong table from the locker room. Hill said he was just making room for a custom-made table, while McDaniel said the move was made in order to refocus after the Dolphins sustained their first loss.

Whatever the reason — a new table has been installed, although it might not be the custom one Hill advertised — McDaniel said he trusts Hill to uphold a standard of accountability within the locker room.

“Him in particular, his personality, he’s one of one,” McDaniel said. “And I think it speaks to how he plays the game. He’s a shorter player that doesn’t play small, and that is his edge. I’ve had players that have been similar in that manner, just not to that level. But the thing that people really don’t realize that is so cool about him, is he’s also very, very accountable.

“He’s one of the first people that I can show in team meetings and say, ‘Hey, this isn’t to our standard,’ or ‘This isn’t right,’ because 10 times out of 10, ever since we started with him here, when I do that, the next day in the team meeting, I get to show him correcting the mistake.”

McDaniel said that level of coachability sets an example.

“He really, from the beginning, helped me set that tone with the players, because I could say, ‘Hey, this isn’t good enough; this is awesome,’ and either way, I have their best interest at heart when I’m trying to communicate something,” McDaniel said. “So he does that with his assignments, and he’s the guy that I can be hard on his route depths, and he’s the guy I can be hard on blocking.

“And every single time he puts it on tape that he not only heard the coaching point, but it was important enough to fix it immediately, which is an example that is huge for all players, young and veterans alike.”

Hill’s presence on the field also has impacted the Dolphins’ leading receiver from 2021, Jaylen Waddle. As with any team that acquires a star, there was potential for some dysfunction with Waddle, who gained 1,015 yards as a rookie, having to relinquish the WR1 role to Hill.

But both players made sure it would be a seamless fit.

Waddle said Hill has been like a big brother to him this season, and together they have turned in some special performances — notably their game against the Baltimore Ravens when they combined for 22 catches, 361 yards and four touchdowns.

Waddle already has 1,003 yards and should eclipse his rookie mark on Saturday in Buffalo.

“Having a guy like that, playing alongside him, you just have to up your game,” Waddle said. “Just seeing him go out there and make plays, how he approaches the game, you don’t have a choice but to improve.”