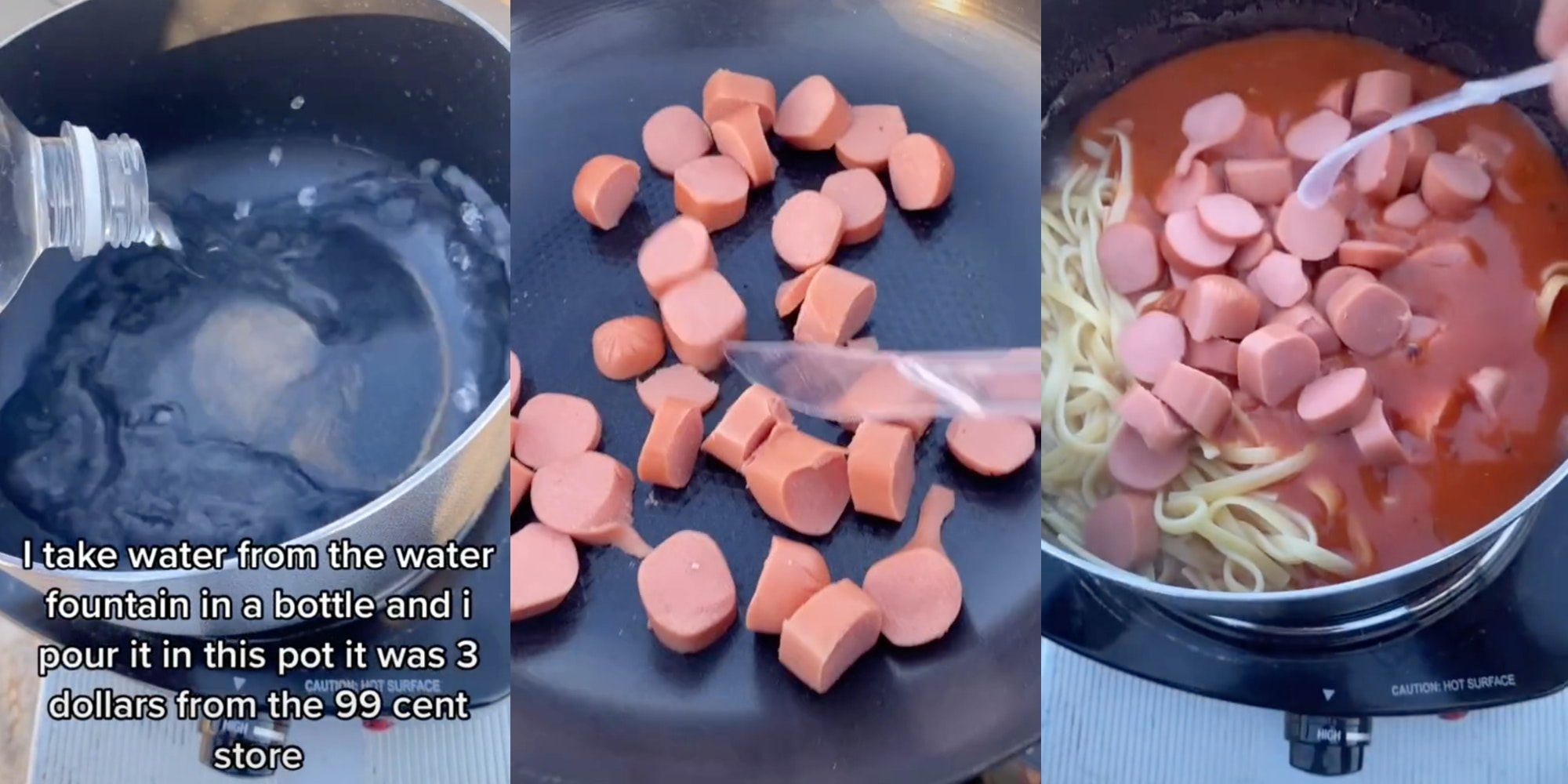 A homeless teenager is blowing people away with his innovative way of preparing meals.

@randomhomelessguy2 posted his first ever TikTok just over a day ago. Since then, he’s collected more than 250,000 followers and 2.3 million likes on his page, despite it only hosting two videos. In both, the teen guides viewers through the process of preparing a meal without a kitchen, stove, or fridge.

The first video, which has upwards of 8 million views, shows @randomhomelessguy2 preparing a surprisingly thorough meal, given his situation. He sets up shop at his local park, which thankfully has both a water fountain and several life-saving outlets.

The teen starts by plugging a simple hotplate, which he says ran him around $15 at his local Walmart, into the outlet. He then places a saucepan over the hotplate and begins boiling water from the water fountain. Ninety-nine cent hot dogs come next, which @randomhomelessguy2 chops using a plastic knife and his simple saucepan, before tossing a hearty hand full of noodles into the boiling water.

Once the noodles are finished boiling, the teen drains them and stirs in a can of Prego pasta sauce. Once the hotdogs are mixed in, @randomhomelessguy2 has his meal, all prepared in a public park. Some commenters even noted that he cooks better than they do. And based on his estimations, the entire meal ran him right around $3.

A second video shows more of the teen’s dietary innovation. He pops by Walmart to do some shopping, but with a budget of only $1.25 he doesn’t have many options. So he grabs a loaf of $1 sourdough bread, and leaves it at that. He then heads back over to his park, which he clarified in a comment is nearby, and begins preparing his dinner.

Several old packets of ramen noodles make up the second half of his meal. He prepares them much like he prepared his hotdog fettuccine the night before, before loading a hefty potion of noodles into half of his loaf of bread. The second half went to his mother, according to the video.

People in the comments were equal parts impressed and devastated by the videos. Within hours of his first video’s posting, people were peppering @randomhomelessguy2’s comment section with requests to send him assistance. Numerous people have requested a GoFundMe, CashApp, or Venmo for the teen so that they can provide him a bit more money for his daily food budget.

@randomhomelessguy2 has denied all of these requests. In the top comment on his first video, the teen explains that he appreciates everyone’s kind words and offers of support but says “I don’t want your money.”

That isn’t stopping commenters from trying, however. The Q&A at the top of @randomhomelessguy2’s page is littered with questions about how people can help improve his situation. Thus far, at least, the teen is continuing to refuse any charity.

So instead, viewers are lauding his strength and creativity. They praised him for being so capable in such an impossible situation, and defended him against countless naysayers in the comments. Numerous people questioned the validity of the teen’s “homeless” claim, citing his cellphone as evidence that he must not be homeless. As pointed out by the creator and plenty of helpful commenters, however, homeless and deviceless are not the same thing. Plenty of homeless people have cellphones—some homeless shelters and programs even hand them out. There are plenty of hurdles in obtaining one, but it is an option for people in need.

More importantly, @randomhomelessguy2 had his cellphone before he became homeless. He has clarified this in multiple comments, but it isn’t stopping the claims of a scam littering his comment section. His phone bill is payed for by his mother, according to the teen, which thankfully includes unlimited data.

Cellphones are an extremely important resource for people of all ages experiencing homelessness. As noted by the Homeless Children’s Education Fund, cellphones are a connection to resources, help, and an avenue out of homelessness. Without a cellphone, it can be all but impossible for a homeless person to find job opportunities, seek medical help, or find necessary resources to survive. In this day and age, more than half of homeless people typically have some kind of phone.

We reached out to @randomhomelessguy2, and will update this story if he gets back.

The post Homeless teen on TikTok shows how he cooks his meals appeared first on The Daily Dot.