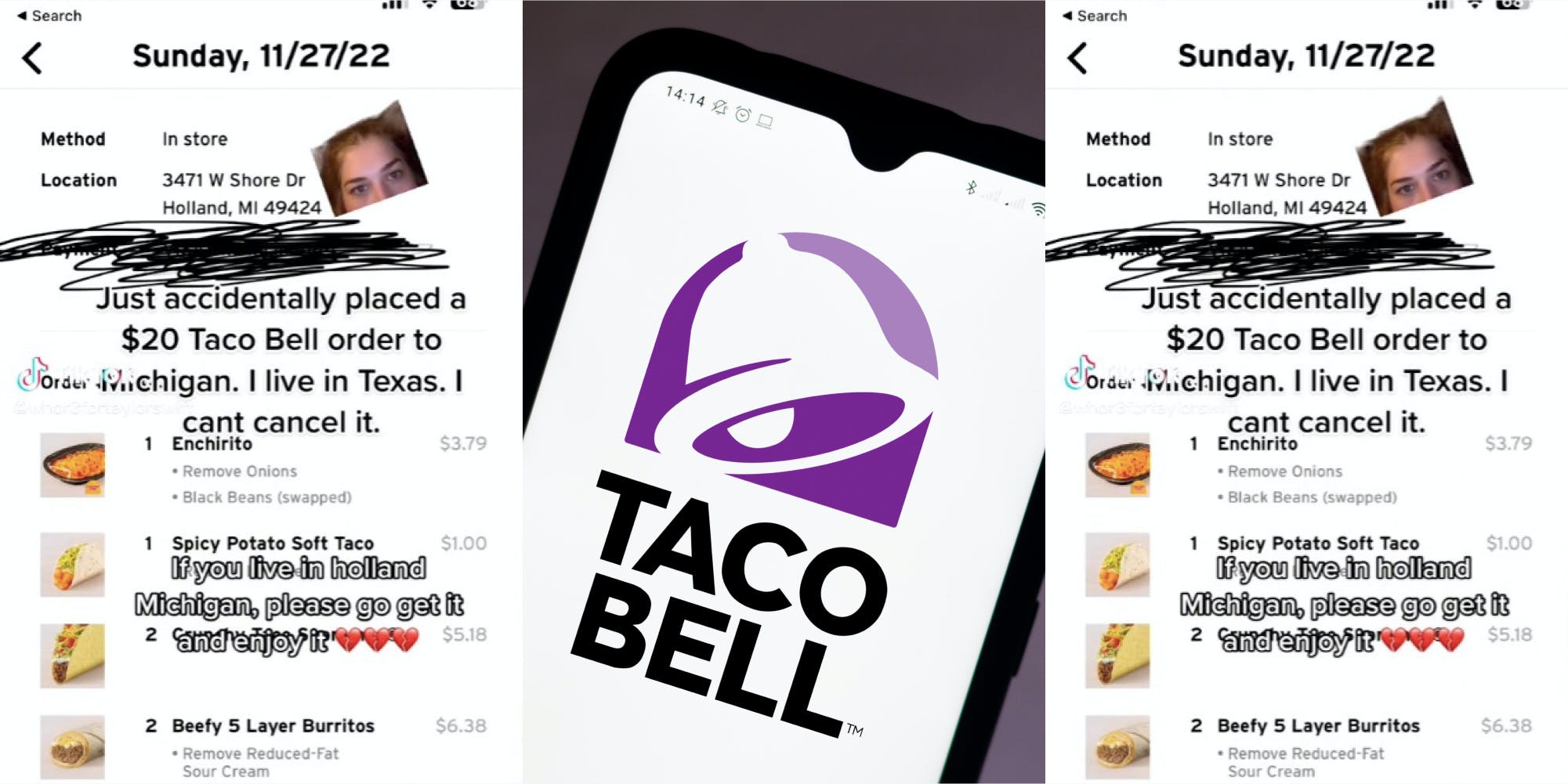 A Taco Bell customer says she placed an online order for $20 worth of food. Unfortunately, she realized shortly after that she accidentally opted to pick up the food from one of the chain’s Michigan locations, despite living in Texas.

In a video posted to TikTok, user @whor3fortaylorswift relayed their predicament to viewers.

The video, which has over 579,000 views, shows a screenshot of the TikToker’s Taco Bell order, which includes 2 beefy 5-layer burritos, a spicy potato soft taco, and an enchirito.

Viewers can also see that the TikToker selected “in store” as their pick-up method. The Taco Bell location they selected, however, is over 1,000 miles from where they actually live.

“Just accidentally placed a $20 Taco Bell order to Michigan. I live in Texas. I can’t cancel it,” reads the video’s text overlay. “If you live in Holland, Michigan, please go get it and enjoy it.”

In the caption, @whor3fortaylorswift further elaborates on her frustration. “Saddest day of my life,” the user wrote, followed by a string of broken-heart emojis.

It’s not clear from the video how @whor3fortaylorswift messed up the ordering process. She clarifies in a comment that she’s “never stepped foot” in Michigan. It is also unclear whether Taco Bell issued her a refund or let her pick up her food from one of their Texas locations.

In the comments, however, many users were quick to reassure the TikToker that she should be able to get her food — or money — if she explains what happened to a Taco Bell worker.

“This happened to me and [I] went to the place in person and told them what happened and they gave my food,” one comment reads.

“Did this with Chipotle once—submitted an appeal & they refunded me,” another viewer shared.

“I don’t think they’ll charge u till u pick it up from the store,” a third user wrote.

The Daily Dot reached out to @whor3fortaylorswift via TikTok comment and to Taco Bell via email.

The post ‘I can’t cancel it’: Taco Bell customer in Texas places order for in-store pick up in Michigan by accident appeared first on The Daily Dot.

‘Who the f*ck has milk with Mexican food?’: Server rants about difficult customers who always send food back
‘Dump its overvalued stock’: Internet users call for Tesla boycott in wake of Elon Musk’s pronouns insult
Advertisement