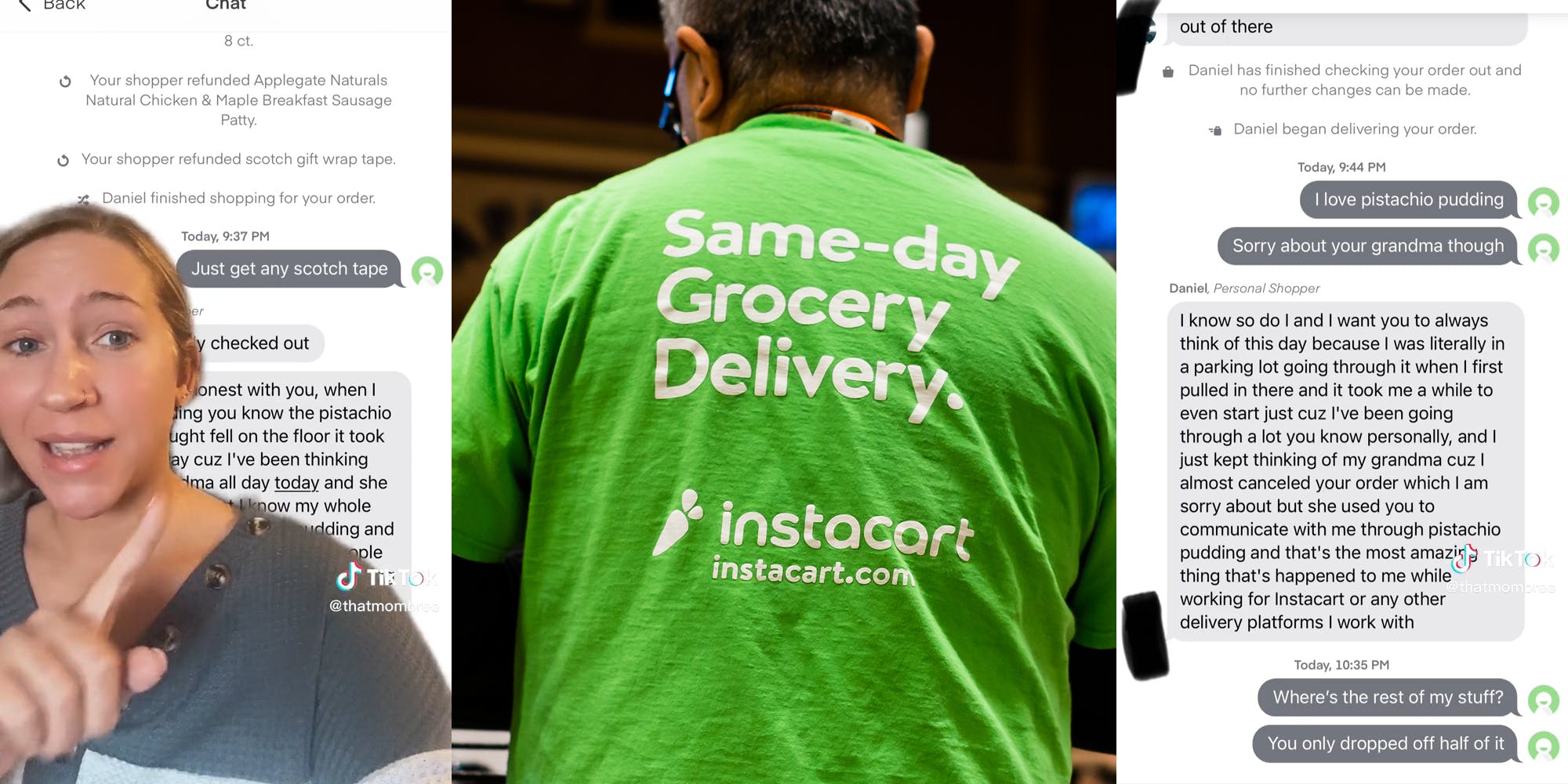 A strange experience with an Instacart shopper who was “going through it” over a woman’s order that included pistachio pudding has raised eyebrows on TikTok, drawing over 600,000 views on the platform.

In a pair of videos posted by user Bree Neal (@thatmombree), she says a replacement order went awry when the shopper began to pick up her items.

“A couple hours later my phone is going off like crazy, so I check it and it says my shopper is replacing my items with other items, something similar,” she says. “If you have ever used Instacart, they are terrible at replacements. They don’t give you anything that’s even comparable.”

Neal says had ordered Scotch tape with her groceries so she could wrap holiday gifts, which the shopper refunded even though she indicated that it could be replaced with another kind of Scotch tape.

“This is where things got really strange,” she says in the video.

Via Instacart message, she says she told the shopper to select any Scotch tape, and the shopper responded saying that they had simply checked out. This was followed by a long-winded message about how her request for pistachio-flavored pudding had reminded him of his grandmother, who had passed. He then claimed the situation caused an anxiety attack, writing that he had to get out of the store and that he was “going through it” in the parking lot.

@thatmombree What did he do with my pudding?! #greenscreen #instacart #storytime #pistachiopudding #fyp #foru ♬ original sound – Bree Neal

When she received her order, Neal says several of her items were missing, including her pistachio pudding.

“He probably took the pistachio pudding to talk to lol,” one commenter wrote.

“The first message I was like ‘awww that’s nice,'” another commenter wrote. “Then he’s like, ‘she communicates thru pistachio pudding,’ and was like, ‘oh nevermind.’ [laughing emoji] I swear we aren’t all like this.”

“When you said he didn’t even deliver the pistachio pudding I HOWLED,” a commenter wrote.

Other viewers also criticized the lack of communication from Neal’s shopper in the situation, as well as the oversharing.

“They should have cancelled and let another shopper take the order,” one commenter wrote.

“Wow as a shopper this is crazy I always try to reach out and never get random items I’m sorry,” another commenter wrote.

“‘She used to communicate with me through pistachio pudding,’ was a turn I wasn’t expecting,” a commenter wrote.

The Daily Dot has reached out to both representatives for @thatmombree and Instacart via email regarding the video.

The post ‘I didn’t order any of this’: Customer quits Instacart after shopper had ‘anxiety attack’ over pistachio pudding appeared first on The Daily Dot.

‘What am I supposed to do with all this food?’: DoorDash driver says customer canceled Little Caesers order after she had already arrived at their house
‘I don’t think you need to work here after today’: Woman says she got fired after giving her 2-weeks’ notice
Advertisement