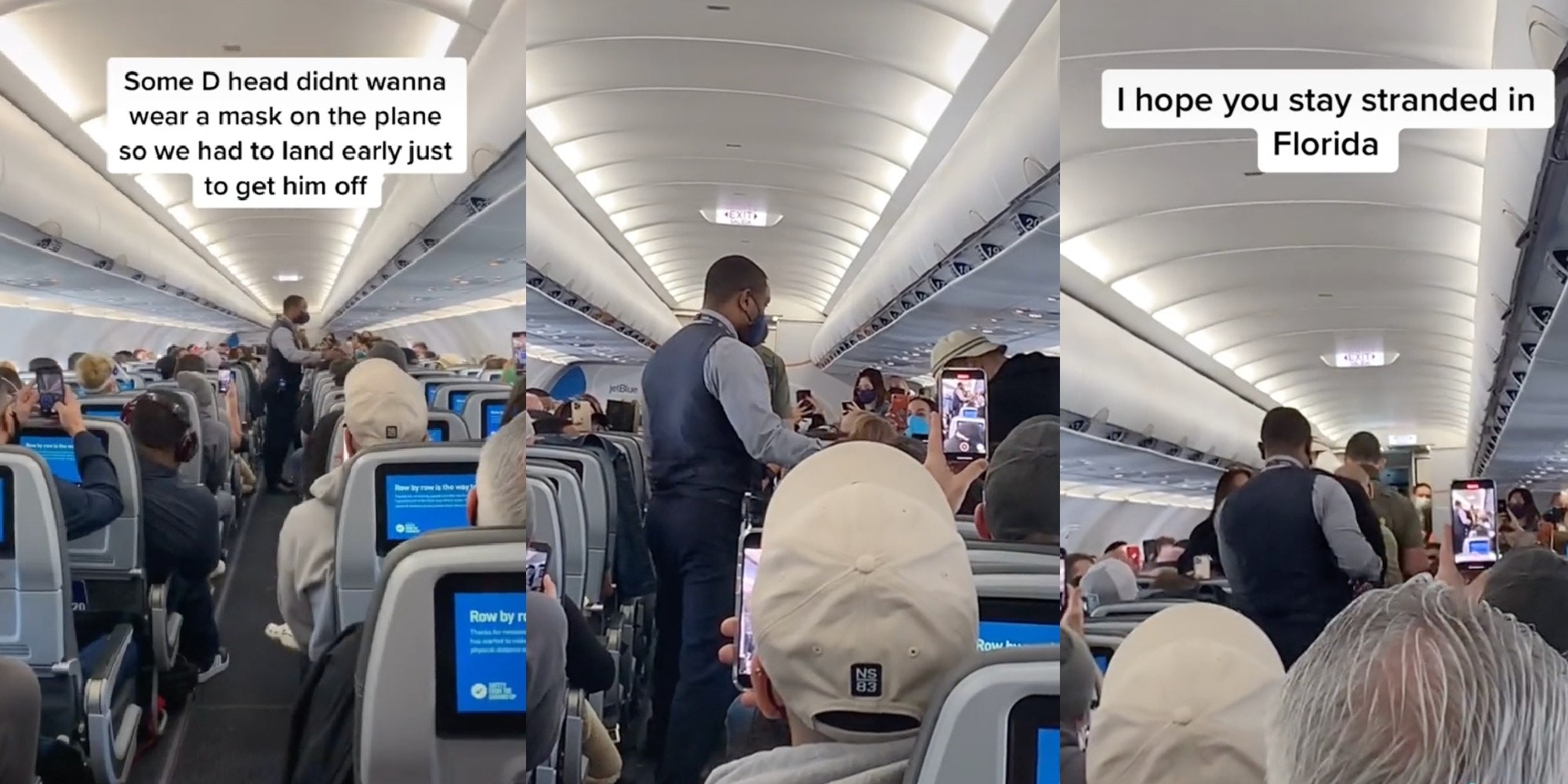 A viral TikTok shows passengers cheering as an individual who refused to wear a mask gets escorted from a plane during an emergency landing.

One person yelled, “I hope you get eaten by an alligator” to the individual after the Mexico-bound plane landed early in Florida.

YouTuber and TikToker Lawrence Redick captioned the video, “Keep ya mask on, it’s dead not that deep.”

At the beginning of the video, a flight attendant approaches a passenger. “Some D head didnt want to wear a mask on the plane,” Redick explains via text-to-speech aduio. “So we had to land early just to get him off.”

The attendant is accompanied by two officers, and they speak with the non-compliant passenger for a moment before the passenger stands. Redick writes, “Come on loser, hurry up.”

Other passengers yell at the individual as the attendant continues to stand in the aisle. The passenger, who appears to be wearing a mask stands and people cheer as he walks down the aisle and exits the plane.

“Walk of shame,” Redick wrote. “I hope you stay stranded in Florida.”

The other passengers “boo” the individual and record him as he exits the plane. One individual says “you suck” and another says, “I hope you get eaten by an alligator.”

Since posted, the video has accumulated over 345,300 views and over 51,000 likes. Among the few thousands of comments, one commenter wrote “The vibes on this [plane emoji] are amazing.” Another wrote, “Baby it’s been a year how we still on this bs people not listening.”

Redick told the Daily Dot in an email that the flight was headed to Cancún, Mexico, when the incident took place. He wrote that the individual kept taking his mask off and that flight attendants made two announcements about mask compliance. Flight attendants warned the individual that if he did not wear a mask the plane would make an “emergency landing.”

“He didn’t keep the mask on so we had to land early and then he put his mask on to leave,” Redick wrote. “We were on the plan roughly 3 hours before we landed.”

Redick said in another video that “it has been a year” of COVID-19.

“If you’re not wearing a mask at this point, it has nothing to do with anything,” Redick said. “You’re just annoying.”

The Centers for Disease Control and Prevention recommends mask usage to decrease the spread of COVID-19.

“It is especially important to wear a mask when you are indoors with people you do not live with and when you are unable to stay at least 6 feet apart,” the CDC writes. “Since COVID-19 spreads mainly among people who are in close contact with one another.”

The post ‘I hope you get eaten by an alligator’: Anti-masker kicked off plane after emergency landing appeared first on The Daily Dot.