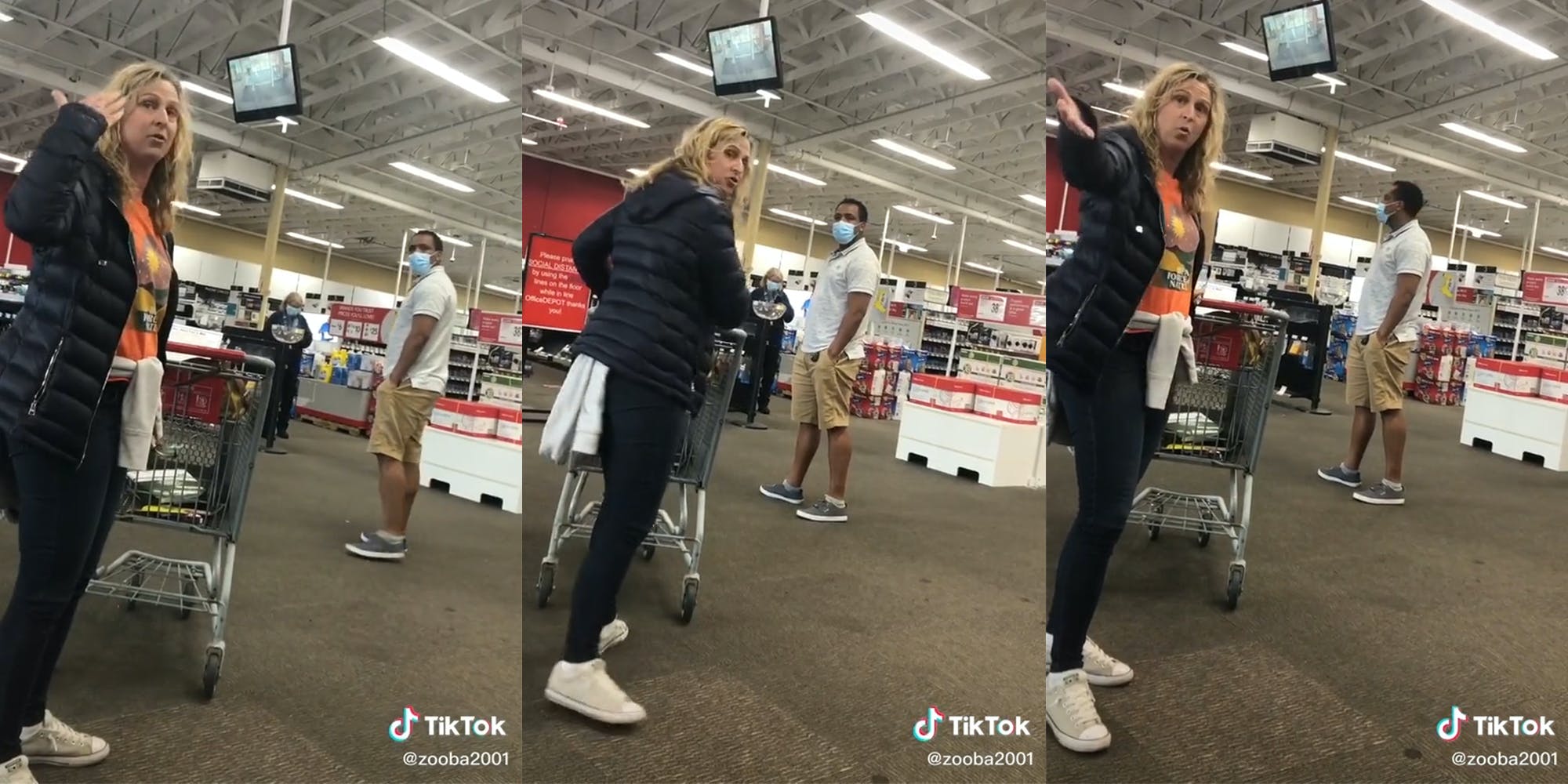 Viral TikTok videos show a woman maskless inside Office Depot comparing her rights to shop in a store without a mask to a woman wearing a hijab. TikTokers called the woman a “Karen” for equating her supposed “rights” to religious garb.

The videos, posted by TikToker and Office Depot employee @zooba2001 on Thursday, together received over 70,000 views.

“Karen Alert I’m so pissed that she had the AUDACITY to compare my hijab to her ‘right’ not to wear a mask,” the caption of the video says.

The user uploaded two videos of the interaction between two employees and the woman, who continued to argue it was her right to shop without a mask and called the sheriff when she wasn’t allowed to make a purchase.

“So if I had a religious and medical reason for not wearing a mask, it would be like if she couldn’t shop in the store without taking off her hijab,” the woman says, mispronouncing the word as “hajeeb” while gesturing to the woman filming.

“Ma’am, no, it is our company policy that you have to have your mask on in the store,” one of the Office Depot employees replies.

“It doesn’t matter,” the customer says, shaking her head at the employee. “Your policy is below the law, it’s below the Constitution, it’s below my rights.”

The woman filming the interaction on her phone interjects to add that the customer must abide by the store policy if she wants to shop there.

“This is a private company so we have our rules,” the woman filming replies.

The customer begins to rant about how she deserves fair and equal treatment because of religious and medical exemptions to wearing a mask.

“We are just trying to protect you and the customers around,” the woman filming says.

The woman walks away from the female employees and toward the checkout line.

“Can you check me out? Are you doing this?” the customer asks a male employee standing her the checkout counter.

“We literally can’t check her out,” the employee filming responds.

“Otherwise, I am going to get the sheriff on the line. I am not joking,” the customer says.

“Go ahead,” the employee responds, holding up the store policy that requires customers to wear a mask while shopping.

In response to commenters’ questions about the situation ended, @zooba2001 uploaded a second video. In the clip, the customer is apparently speaking on the phone with a sheriff and explaining that the store refused service to her because she is not wearing a mask inside.

“Please tell me she wasn’t allowed to buy anything,” one user commented.

“Nope we refused to check her out,” @zooba2001 responded on TikTok.

Many viewers on TikTok applauded the employees’ calm response to the customer, saluting their efforts to show restraint and patience in the face of disrespect.

“I would’ve snapped,” one user wrote.

“I was trying so hard to keep my cool but thankfully we refused to check her out at the register and the police said she was trespassing and she left,” the creator commented.

People are using the ‘jump in the pool if’ meme to judge people and pop culture
‘Don’t ever stop at a Bareburger’: Fast food joint says it was ‘hacked’ after Instagram account insults employees
Advertisement